Billionaire director led SoftBank's board against giving up Sprint TOKYO -- After months of talks on merging two U.S. wireless carriers, the collapse came suddenly. SoftBank Group directors including Tadashi Yanai, the man behind the Uniqlo apparel chain, refused to approve handing over control of Sprint, sending Chairman and CEO Masayoshi Son's plans for American greatness back to the drawing board.

The SoftBank chief made one last appeal on the morning of Oct. 27. Deutsche Telekom, parent of third-ranked U.S. mobile company T-Mobile, "has no intention of ceding control" if the carrier were to merge with No. 4 rival Sprint, a SoftBank unit, he told the board of directors. "The way things are going, the talks will collapse."

The response of directors -- including outsider Yanai, CEO of Fast Retailing, and Simon Segars, chief executive of SoftBank-owned chip designer Arm Holdings -- was near-unanimous: SoftBank shouldn't let go, either. A little over a week later, the two carriers announced merger talks were off, citing an inability "to find mutually agreeable terms." 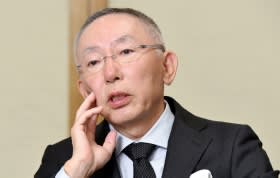 Fast Retailing CEO Tadashi Yanai sits as an outside director on SoftBank's board. (Photo by Kotaro Igarashi)

The boardroom drama highlights directors' periodic success in steering SoftBank, often seen as a vehicle for Son to pursue his expansive visions of technological change.

The purchase of Sprint in 2013 marked SoftBank's first foray into the U.S. mobile phone market -- a chance the Japanese heavyweight was not about to waste. It sent executives including Junichi Miyakawa, who become the unit's technology chief, to rebuild the then-struggling carrier's network.

But Sprint's recovery has only just begun, and it still needs to make hefty investments in 5G network technology. As Son saw it, combining Sprint with T-Mobile would provide much-needed scale. Though the U.S. Federal Communications Commission shot down the companies' first attempt at a merger in 2014, the SoftBank chief was content to wait, certain the regulator would eventually change its mind.

SoftBank's Son says no merger is no problem for Sprint

In the meantime, T-Mobile was busy growing, transforming from deadweight to a major driver of growth for its German parent. When a second chance at merger talks arrived, Deutsche Telekom was far less willing than SoftBank had hoped to give up control of its prize.

This left several options for a merger. SoftBank could retain a measure of control by making Son the chairman of the merged company while letting Deutsche Telekom become the top shareholder. Or SoftBank could hand over the reins before buying the combined unit back several years down the line. The two sides reached a broad agreement toward a merger in October, aiming to nail down the final details in short order.

Then SoftBank's board stepped in. Because Sprint's market capitalization is around two-thirds that of T-Mobile, a simple stock swap would put SoftBank's stake in the merged entity below Deutsche Telekom's. This would cut SoftBank's influence over the American wireless market regardless of the advantage in scale, leaving SoftBank worse off than before, the directors argued.

While SoftBank is generally viewed as Son's company, the board has played a significant role in past developments. Yanai gave SoftBank's acquisition of Arm in 2016 the push it needed to proceed, and directors convinced Son to stay on as the company's chief when he contemplated resigning after Japan's devastating March 2011 tsunami.

Yanai and other directors have also called out Son in the past, including when the chief met with Donald Trump, then the American president-elect, in December 2016 without first notifying the board. The chairman ultimately apologized. "Even Mr. Son listens to what Mr. Yanai has to say," a source close to the matter said. Both billionaires have ranked either first or second among Japan's richest people in recent years.

SoftBank's U.S. wireless strategy will now focus on Arm, which designs around 90% of the chips used in mobile phones around the world. Control over chips, Son reasons, will give SoftBank an edge as 5G service and the so-called internet of things -- networks of connected devices -- catch on.

But the fact remains that Sprint has fewer than half the subscribers of Verizon Wireless and AT&T, America's big two mobile carriers, and only one-third of the revenue. With the company's ability to weather further shifts in the U.S. mobile market still uncertain, SoftBank's directors have left themselves with some tough challenges to overcome.