TAIPEI -- Chip assembler ChipMOS Technologies said on Wednesday that it had terminated plans to sell a 25% stake to Beijing-backed tech conglomerate Tsinghua Unigroup after months of deliberation by the administration of pro-independence President Tsai Ing-wen failed to move the approval process forward.

"We have done our best to try to ask the government to approve the sale, but it's unlikely now that any progress would be made by the end of this year," Chairman and Chief Executive S.J. Cheng told reporters on Wednesday. Tsai's government had subjected the deal to close scrutiny for months over security concerns. 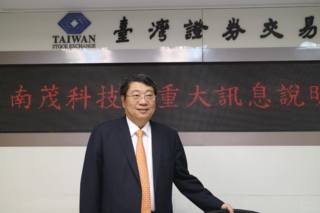 S. J. Cheng, chairman of ChipMOS, says it is inevitable that smaller Taiwanese chip companies will seek tie-ups with Chinese counterparts to gain business in China. (Photo by Cheng Ting-Fang)

But Cheng said: "It's still inevitable that we need to come up with some ways to work with Chinese companies to grow more business there. Otherwise our company would become irrelevant and face more pressure later if we do nothing now."

Although ChipMOS has given up the deal worth 12 billion New Taiwan dollars ($674 million), it is proposing an alternative tie-up with Tsinghua Unigroup. ChipMOS will now sell a 54.98% stake in its Shanghai unit to Tsinghua Unigroup's subsidiary for 498.4 million yuan ($72.2 million).

The two parties have also agreed to increase their investment in ChipMOS Shanghai later to around $1.74 billion yuan. Tsinghua Unigroup and ChipMOS would control 48% and 45.02%, respectively in the Shanghai unit after the planned recapitalization.

Tsinghua Unigroup will be able to appoint the chairman for this joint-venture, according to S.K. Chen, chief financial officer of ChipMOS.

The new investment plan will expand capacity at the Shanghai plant, which mainly assembles display driver integrated circuit chips to tap into the growing market for Chinese homemade panels, said Cheng. The output will rise to eventually account for 30% of ChipMOS' total revenue in three years, from less than 7% currently.

"We hope later we can bring ChipMOS Shanghai to the public in China as soon as possible to gain more capital for future investment to tap into the rapidly growing semiconductor market," said Cheng, adding that China's stock markets offer a more attractive price-earnings ratio than their Taiwanese counterpart.

Since Tsai came into office in May, local officials have been reviewing Chinese investments in Taiwan's tech industry, particularly in the semiconductor sector, to ensure the island will keep its technological and competitive edge.

The development also came almost a year after Tsinghua Unigroup announced it was also eyeing a 25% stake each in Siliconware Precision Industries (SPIL) and Powertech Technology, Taiwan's second and third largest chip assemblers respectively, with investments, including in ChipMOS, totaling NT$88.1 billion.

SPIL said in April Tsinghua Unigroup had withdrawn its offer to buy the 25% stake. Currently, Powertech is the only one still waiting for regulatory approval.

Executive Secretary Emile Chang of Taiwan's investment commission said on Wednesday that his organization respects the decision by ChipMOS but would continue to review the Tsinghua Unigroup-Powertech transaction.

"Regarding the new plan by ChipMOS, we will still need to look into the proposal to make sure there is limited risk for talent outflows and the loss of key technologies," said Chang.

ChipMOS halted the trading in its shares for one day on Wednesday ahead of this major announcement.