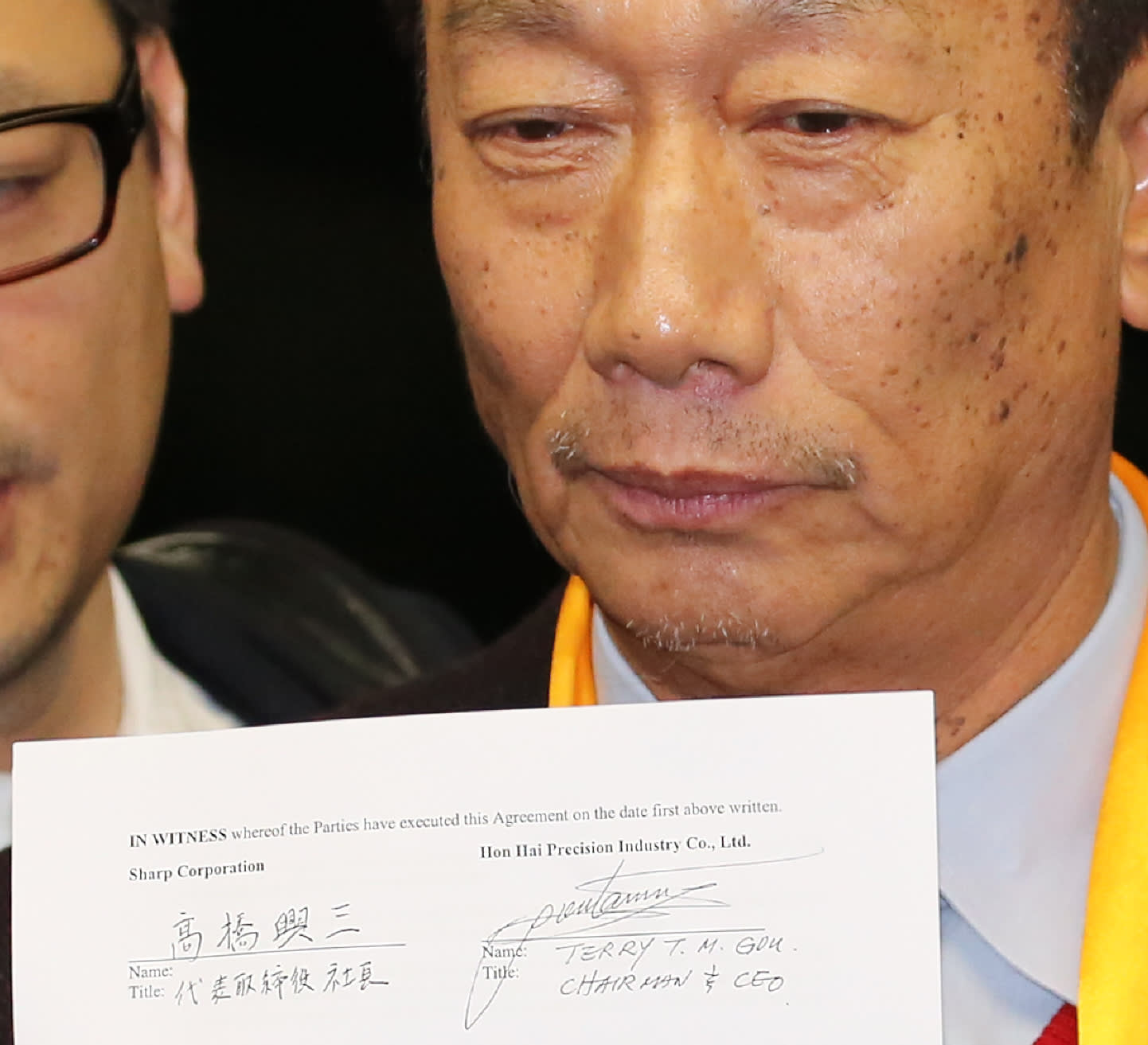 OSAKA -- Taiwan's Hon Hai Precision Industry, or Foxconn, aims to finalize by the end of the month a deal to acquire ailing Japanese electronics maker Sharp, with the two having reached a preliminary agreement Friday, Chairman Terry Gou said.

Gou spent eight hours on Friday in talks with Sharp President Kozo Takahashi and other top executives at the company's headquarters here. Hon Hai has offered to acquire Sharp in a bailout deal worth around 700 billion yen ($5.98 billion). Friday's meeting resulted in an agreement stating that negotiations will continue with the goal of a final deal by Feb. 29. The agreement also allowed for 100 billion yen to be extended immediately.

Negotiations are 90% complete, Gou told reporters after Friday's talks. "The remaining 10% is legal matters -- no real problems," he said. Hon Hai's investment in Sharp is designed to resuscitate the company, the chairman said.

Hon Hai looks to break off Sharp's flagging solar cell operations to ease the burden on overall earnings. But the Japanese company will be otherwise left intact, Gou said. "We will maintain the Sharp brand as well," he said, adding that "no employees under 40 will be let go."

After the acquisition goes through, Hon Hai will rapidly invest in technology and the latest equipment for Sharp's suffering liquid crystal display panel business, aiming to make those operations the world leader once again, Gou said. Hon Hai could also help grow Sharp's share of the consumer electronics market by improving product development, he said.

Some at Sharp are optimistic about Hon Hai's offer as well, noting that the acquisition could help accelerate capital investment that had stalled due to the company's financial instability.

Sharp had planned to accept a rival offer from the public-private Innovation Network Corp. of Japan. But Hon Hai pushed its way into the lead with a sweetened bid at the end of January. Sharp's board met Thursday to discuss Hon Hai's takeover offer.

Gou claimed that Friday's agreement gave Hon Hai preferred negotiating rights. Sharp denied in a press release that such a decision had been made, saying only that "both parties will continue to negotiate in good faith and in a timely and expeditious manner regarding the final conditions of contract."