Outbound investments set to slide as protectionism and hostility rise

Germany has tightened the review process for investments by non-EU parties in the wake of Midea Group's acquisition of Kuka,   © Reuters

HONG KONG -- The drive for protectionism and growing hostility to foreign investments are forcing Chinese dealmakers to revise their strategies when acquiring assets abroad.

The U.S. is mulling strengthening the role of the Committee on Foreign Investment in the United States, or CFIUS, which is tasked with reviewing foreign acquisitions of U.S. companies on national security grounds. Germany also passed new rules to tighten scrutiny of foreign investments last month.

"[These changes] will definitely have some impacts," said Chen Shuang, chief executive of the cross-border asset management unit of state-owned financial conglomerate China Everbright Group. "You might need to strip your acquisitions of components that are considered sensitive," said Chen, citing a deal that the Hong Kong-listed company recently struck in the U.S. "Adjustments are necessary," he added.

Chen is also the rotating chairman of the China Mergers and Acquisitions Association, a non-profit, non-government entity approved by the State Council and the Ministry of Civil Affairs. Founded in September 2004, the organization claims to provide investment banking services for governments and enterprises at home and abroad.

With roughly $83 billion worth of assets falling into Chinese hands in the past two years, the U.S. had been China's top destination for outbound investments, according to London-based financial intelligence provider Mergermarket, rebranded as Acuris last month. But the country had slipped to third place in the first half of 2017, selling just $7.5 billion worth of assets to the Chinese, trailing the U.K.'s $15.5 billion and Australia's $14.7 billion.

Washington is drafting regulations to allow CFIUS to block technology investments, given China's growing interest in artificial intelligence and machine-learning technologies developed in Silicon Valley, according to a Reuters report. The worry is that such cutting-edge technology might indirectly help bolster China's military capabilities and lift it ahead in strategic industries.

Germany also extended the duration and scope of examination for investments from residents outside the European Union in July, following a heated debate prompted by Beijing-based appliance maker Midea Group's $3.9 billion takeover of German robotics company Kuka last year. Many suggested the stricter regime is aimed at the Chinese.

"In principle, the law is of a general nature and does not discriminate, but the 'lack of reciprocity' currently 'observed' by the German press or policymakers relates to China," said Christian Cornett, Frankfurt-based partner at law firm King & Wood Mallesons. "Quite some observers expect a European Union regulation to tighten the rules too," said Cornett.

Factoring in the challenges posed by regulators abroad, accounting firm Ernst & Young forecast that Chinese outbound investments would end up at around $100 billion this year, versus $183 billion last year. Announced mergers and acquisitions totaled $65.7 billion in the first half, down 51% on the year. 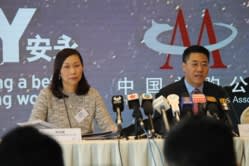 The expected slowdown is also attributable to Beijing's desire to encourage prudent investments while deleveraging the corporate sector, according to Loletta Chow, who leads Ernst & Young's China overseas investment network.

A series of regulatory measures have been imposed since late 2016 to rein in Chinese outbound investments, including greater inspection for deals related to the real estate, hospitality, film studio, entertainment and sports sectors. The regulator has also suspended some outward foreign direct investments using offshore financing against a domestic guarantee.

While suggesting such measures have created short-term shock, Chow emphasized that the real hurdles for Chinese outbound investments came after the transaction. Citing a survey by Ernst & Young, she pointed out that 70% of the respondents found integrating corporate culture a challenge, while 58% had difficulties in aligning their objectives. Some 38% had issues with talent attraction and retention.