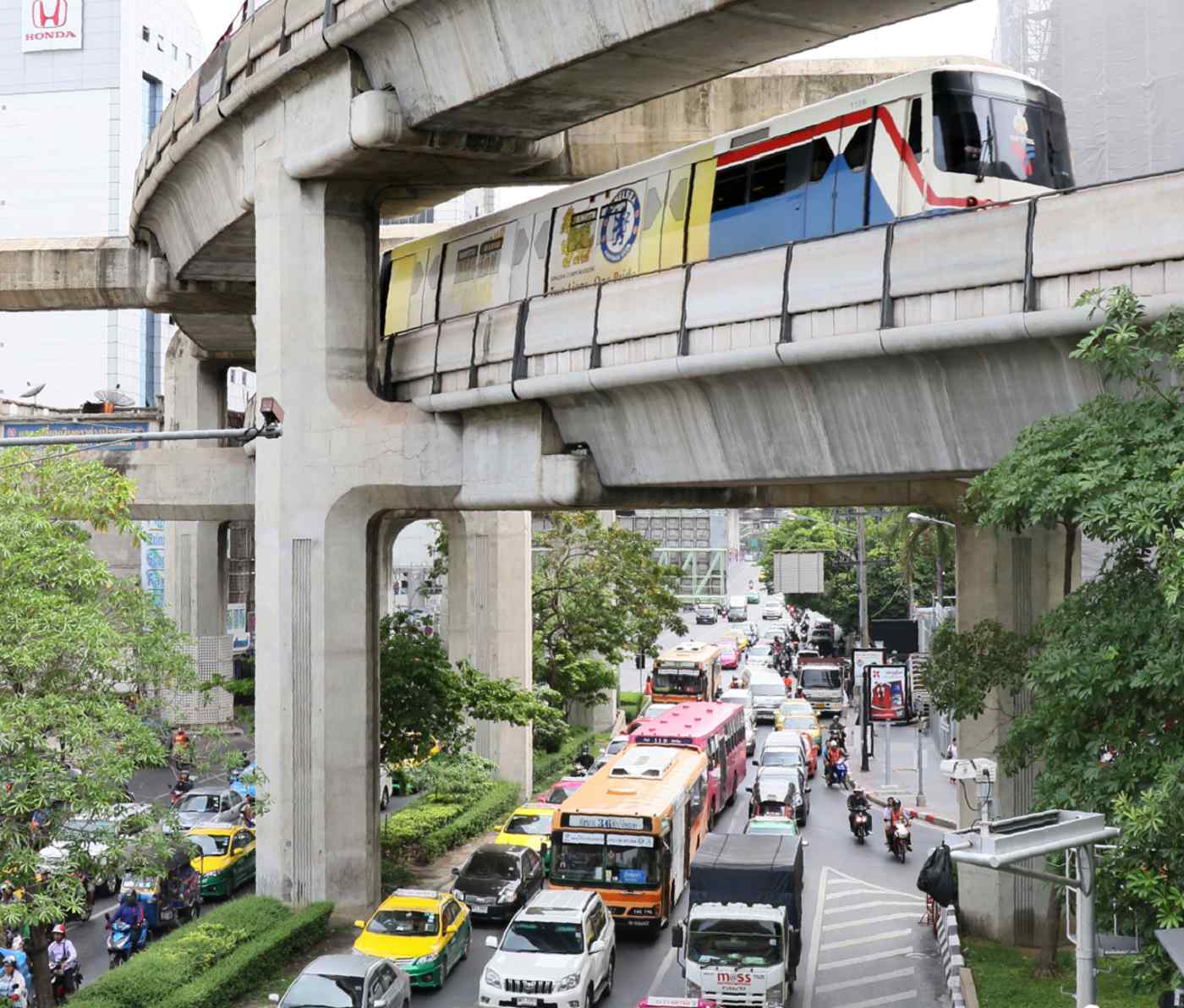 BANGKOK -- Three Japanese companies have reached an informal agreement on a 32.4 billion baht ($962 million) contract for a new urban rail line in Bangkok, winning with a combination of cost cuts, technical know-how and support from Tokyo.

The project, among the largest urban rail lines to be built in Asia by Japanese companies, is an elevated railway with a total length of about 40km. It will connect Bang Sue Station in northern Bangkok with nine stations to the north and three to the west. Service is slated to begin in 2019. Sumitomo will oversee the project, while Hitachi will contribute 130 or so rail cars and Mitsubishi Heavy Industries will deliver signaling systems and transformer facilities.

After a July 4 meeting in Tokyo, Japanese Prime Minister Shinzo Abe and Thai leader Prayuth Chan-ocha issued a joint statement that referred to the project, saying they welcome the agreement between Japanese companies and Thai authorities. An official contract is expected to be inked as early as August, paving the way for work to start.

Bangkok's main train station is Hua Lamphong Station. State Railway of Thailand plans to have Bang Sue Station take on that role with the launch of the Red Line, making it a major terminal where passengers can connect to other urban rail networks as well as planned long-distance routes.

Thailand also intends to extend the Red Line. Hopes are high that this will bring a steady stream of orders. "Once the system has been decided on, the same things will probably be installed in the future, too," said Yoshito Asano, director of the Bangkok office of Jetro, Japan's trade promotion organization.

Bidding began in January 2011. Four groups threw their hats into the ring: Sumitomo, Hitachi and Mitsubishi Heavy Industries; Japanese trading house Marubeni and Hyundai Rotem; Mitsubishi and Siemens; and Samsung Group and Japan's Sojitz. The Mitsubishi-Siemens consortium dropped out due to paperwork problems, while the two South Korea-Japan alliances also withdrew after not meeting Bangkok's requirements, among other issues. The all-Japanese group was awarded the right of first refusal in July 2014, three and a half years after its bid.

Thorough planning allowed the consortium to win the massive contract. It was able to arrange a loan from the Japanese government at 0.4% interest, compared with the 1.5% typical for a middle-income country like Thailand. Tokyo classified the railway as an environmental project aimed at easing gridlock and reducing air pollution, allowing it to offer the lower rate.

The group's technological prowess also played a role. State Railway of Thailand's specifications called for a top speed of 160kph and a rail width of 1 meter. Narrower rails allow for smaller elevating structures and shorter ties, but introduce challenges in achieving the top speed. Hitachi's experience with the similar Tsukuba Express line helped win over Bangkok.

Cutting to the bone

The biggest hurdle was price. The Japanese consortium's bid of 49 billion baht was well over the 27 billion baht budget. Thailand considered a second round of bidding, but the two sides were able to reach a compromise after marathon negotiations lasting a year.

The Japanese side exhaustively re-examined the contract. The bidding requirements were often unclear on whether the companies providing the rail cars and systems or the one doing the engineering work would be responsible for certain costs. The companies identified items that did not apply to them and pushed State Railway of Thailand to review the requirements. They delved into the details of the proposal to trim fat, even changing the specifications of the train car doors.

Currency fluctuations provided the biggest boost to their prospects. Between the initial bid and the recent agreement, the baht appreciated some 30% against the yen, helping to reduce the total cost to just under 33 billion baht.

Bangkok was able to push the budget up to 32 billion baht, but the two sides were still divided over the remaining 1 billion baht. In the end, Transport Minister Prajin Juntong decided to split the difference, setting the budget at 32.4 billion baht.

The outcome is cast against Japanese companies' tacit preference not to get too deeply involved in Thai rail projects after being burned in the past. A Japanese-French consortium including Mitsubishi, Mitsubishi Electric and Alstom had won the right of first refusal on a contract for operating systems for Thailand's first subway, which began service in 2004. But Bangkok announced suddenly it was breaking off the deal, with Siemens -- which had lost in the original bidding -- taking over the project. The behind-the-scenes negotiation that was clearly involved fueled distrust among the Japanese contingent.

This friction is becoming a thing of the past. In 2013, Marubeni, Toshiba and East Japan Railway won orders for cars and signaling systems for the Purple Line subway. Test runs are expected to start in 2016.

One official in Thailand's transport ministry complained that Japanese technology is wonderful but expensive. Past contract terminations stemmed from price negotiations going south. Although the Japanese consortium's budget-trimming efforts on the Red Line proposal were aided by a stroke of good luck in the form of the yen's softening, an industry source said profits will probably be quite slim.

Alstom and Siemens have taken the lead in urban rail transit in Southeast Asia in areas that have gotten a head start, such as Singapore and Malaysia. Japanese companies are catching up in Indonesia and Vietnam. And with Chinese and South Korean rivals searching for opportunities in emerging countries, competition is heating up. While Japanese companies offer undeniable quality and speed, improving cost-competitiveness will be key to a sustainable railroad business.