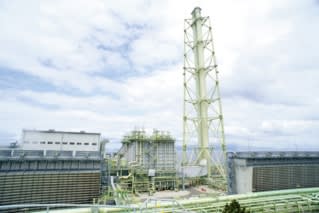 The partners seek to beat Osaka-region power provider Kansai Electric Power's rates by an initial 5% or so and may go even lower eventually.

Docomo has some 9.3 million subscribers in the Kansai region, which includes Osaka, providing a ready-made marketing target.

Supplying residential power is a relatively profitable business that Osaka Gas is eager to take up. It has some 1.8 million kilowatts of generating capacity that will rise to 1.95 million next year after a new coal-fired plant and other facilities come onstream. That is the equivalent of two nuclear reactors' worth of power, giving it one of the biggest generating capacities in Japan, barring the regional electric utilities.

Looking beyond households, Osaka Gas will market a different kind of bundle -- electricity and piped-in music. Its partner in this venture will be Usen, a major name in background music that has carved out a niche among restaurants and other small businesses. The company has some 200,000 subscribers in the Osaka and Nagoya regions.

Osaka Gas' mainstay business is languishing -- gas sales fell 1.5% on the year in the six months through September. Deregulation of residential gas sales looms in 2017, prompting the company to diversify.

Such partnerships between utilities and outsiders to the business of selling electricity are coming thick and fast ahead of April's milestone in deregulation. Most see the main battlegrounds as metropolitan areas, such as Kansai and the Kanto region, which includes Tokyo.

Tokyo Electric Power got off to an early start in this regard. It is readying to sell bundled power and telecom services with SoftBank, as well as power-and-gas and other bundles with Nippon Gas, Tokai Holdings and others. Kansai Electric is planning to team up with telecom group KDDI.

All this alliance-building partly reflects the nature of the business.

"Electricity has no color or shape, so you add value by combining it with something else," a senior Tepco executive says.

Tepco and its peers command vast distribution networks, but having operated as virtual monopolies for decades, they lack strong sales forces. Enlisting partners can bolster their ranks on this front.