Denso to use Internet of Things to increase efficiency

TOKYO -- Japanese auto component maker Denso plans to use Internet of Things technology to connect its factories worldwide online in a bid to increase efficiency. About 130 factories at home and abroad will be linked by 2020.

The technology allows Denso to improve efficiency at its factories by monitoring and analyzing workers' movements, their skills and the condition of production facilities. Sensors gather operational information, and the system analyzes it in real time to avoid breakdowns and reduce maintenance costs.

Denso produces a variety of auto components, including car air conditioners and engine parts, and some of its factories are making the same items across the world. For instance, meters, one of Denso's mainstay products, are produced in Japan, the U.S., Mexico and the Philippines. Once production efficiency improves at one factory with the new technology, Denso hopes to transfer that to other facilities making the same products, operating them "as if [it was] one factory," as Denso President Koji Arima described it. Making adjustments to production lines will also be easier.

For starters, Denso plans to connect some of its factories with the new system in 2018. Then, the goal is to have the network expanded to all production facilities by 2020. The overall cost, including a planned renewal of production information systems, could reach around 10 billion yen ($83.9 million). Denso's newly created office for promoting the Internet of Things at factories will likely decide on the details by this spring. 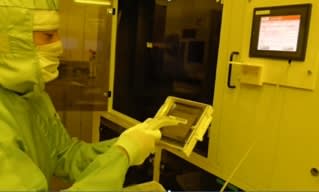 Oki Electric Industry uses an Internet of Things-based system to improve efficiency at this plant in Gunma, Japan, and other plants.

Meanwhile Oki Electric Industry, another Japanese company, has introduced a similar Internet of Things-based system at four of its plants making semiconductors, one of the key components of printers and a major operation for Oki. The system makes it easier to trace production history, such as who is in charge and when the item was produced. By checking and analyzing such data thoroughly, Oki has reduced the number of defective products by 70%. The company now plans to introduce the system across their printer operations, such as customer services and related activities at affiliate companies.

The Internet of Things has been spreading fast thanks to falling prices of sensors and cheaper communications costs. Germany has been encouraging its manufactures to adopt the technology, a movement dubbed Industry 4.0, while the U.S. hopes to promote it as the "Industrial Internet."