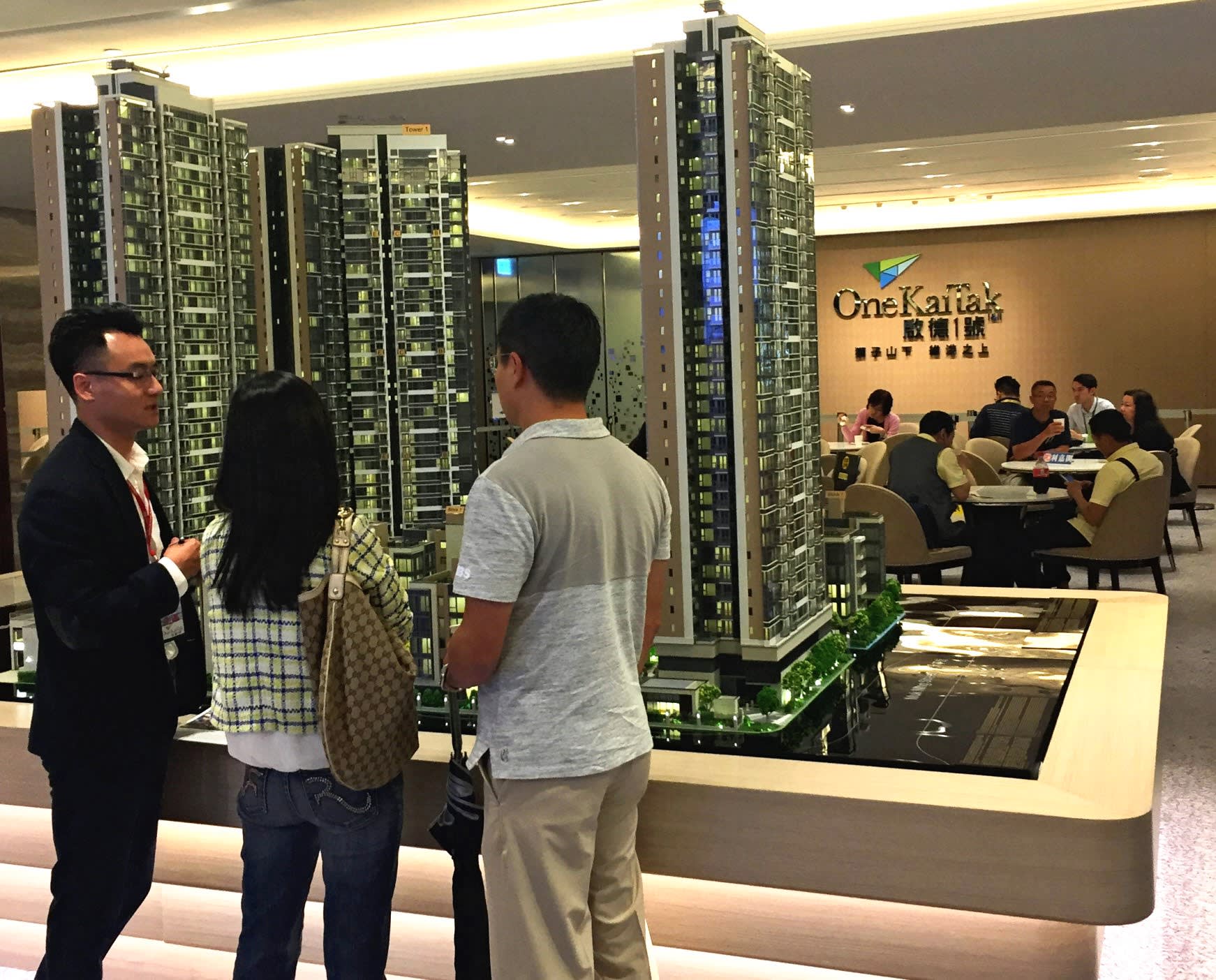 A sales representative, left, talks to a couple in September at a showroom for the One Kai Tak condominium complex.
SHINYA ABE, Nikkei staff writerOctober 5, 2016 13:00 JST | Hong Kong, Macau
CopyCopied

HONG KONG -- The condominium complex built under a program aimed at providing affordable homes to Hong Kong residents recently put units on the market, but the steeper-than-expected price tags have left some middle-income residents cold.

The densely populated Chinese territory, where over 7.3 million people are crammed into in an area just half that of Tokyo, is known for having the highest residential property prices in the world. So when Chief Executive Leung Chun-ying announced the "Hong Kong Property for Hong Kong People" program in 2012, it came as welcome news for many middle-class residents dreaming of owning their own place.

The program, under which residential properties are sold only to permanent residents, aimed to control prices for such properties by excluding wealthy nonresidents.

But locals are now wondering whether the program was worth it. The first batch of 110 units at the One Kai Tak condominium complex has been priced from 5.8 million Hong Kong dollars to HK$14.6 million ($1.88 million). That is similar to or higher than prices for comparable condos in adjacent areas, according to a local real estate agent.

One Kai Tak is in a prime location in northeastern Kowloon, on part of a large tract vacated by the old Kai Tak Airport. The developer, China Overseas Land & Investment, is a big Chinese company.

Asked to explain the high prices, Tony Yau Wai-kwong, managing director at China Overseas Property, an affiliate of China Overseas Land, said the company is only required to give priority to residents, not to sell at reasonable prices.

Because the condo was built under the 2012 program, units are available only to permanent residents. Once bought, the owner is not allowed to resell a unit to a nonresident for 30 years.

But neither these restrictions nor the high prices deterred prospective buyers. When the first batch went on the block, more than 4,200 applications were submitted within a week for the 110 units offered. Interest in the condos remained high early September, with nearly many as 50 people visiting a showroom set up in a nearby high-rise, even on a weekday.

Heartened by the response, the developer raised the prices by 2% for the next batch of units.

But the asking price was a turnoff for one couple in their 30s who visited the showroom. "This isn't affordable for us. This property is for wealthy investors," said the husband.

With residential property prices nearly three times higher than they were immediately after the global financial crisis, owning a home is a distant dream for many people from Hong Kong. Observers say the government may soon feel the pressure to take additional steps to help the low and middle class buy homes.