CHONGQING -- The race to capitalize on Southeast Asia's tech-driven sharing economy is sizzling as Didi Chuxing and SoftBank Group move to push back against U.S. titan Uber Technologies in their backyard with their new $2 billion investment in Grab, the region's largest ride-hailing company.

The Chinese ride-booking giant and Japanese information technology powerhouse are leading a funding round totaling $2.5 billion for Grab, which is "establishing a clear leadership in Southeast Asia's internet economy," Didi CEO Cheng Wei said Monday in a news release. Didi and Grab "look forward to working together," he added.

Grab, based in Singapore after being founded in Malaysia in 2012, offers taxi and ride-sharing services in 65 cities in the two Southeast Asian countries, as well as Indonesia, Thailand, Vietnam, the Philippines and Myanmar. At least 50 million people have signed up to use its smartphone app, the company says. 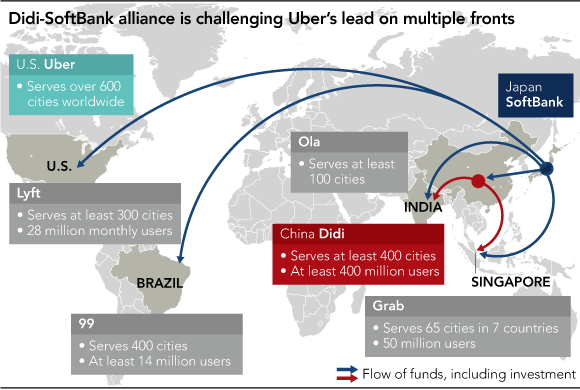 Didi, which boasts 400 million users, also struck up a partnership -- including capital cooperation -- with Lyft, an American rival to Uber. The deal has made Didi's app available to users even in the U.S. The Chinese company owns a stake in Indian ride-hailing company Ola as well.

Didi previously invested in Grab two years ago, and the new round of financing will strengthen a partnership also designed to secure the Chinese company's foothold around Asia.

A similar duel is playing out in the home-sharing market, as China's Tujia and American company Airbnb expand their battlefronts throughout Asia. SoftBank and Didi clearly aim to oppose Uber via their loose alliance. But beyond that, both see major opportunities in the sharing economy.

Didi aids China's government in urban planning and easing traffic congestion. The move appears intended to lay the foundation for the company to become a prominent platform in the coming age where cars no longer are owned but shared. The company sees this as a step toward its vision of offering ride-sharing services throughout Asia.

SoftBank CEO Masayoshi Son noted that Grab possesses both transport and payment technology. This suggests SoftBank hopes to use the Singaporean company to build toward success with payment services in Southeast Asia, looking to replicate its success in China made with investment in Alibaba Group Holding.

Aside from SoftBank, Japanese companies are largely trailing Southeast Asia in developing the sharing economy. Regulations shackle ride-hailing services in Japan, limiting companies like Uber largely to hired-car and food delivery operations. U.S. and Chinese home-sharing companies built a lead in Japan's market before the country established a legal framework for such enterprises, leaving domestic ventures hard-pressed to compete.