Do not underestimate the Samsung factor 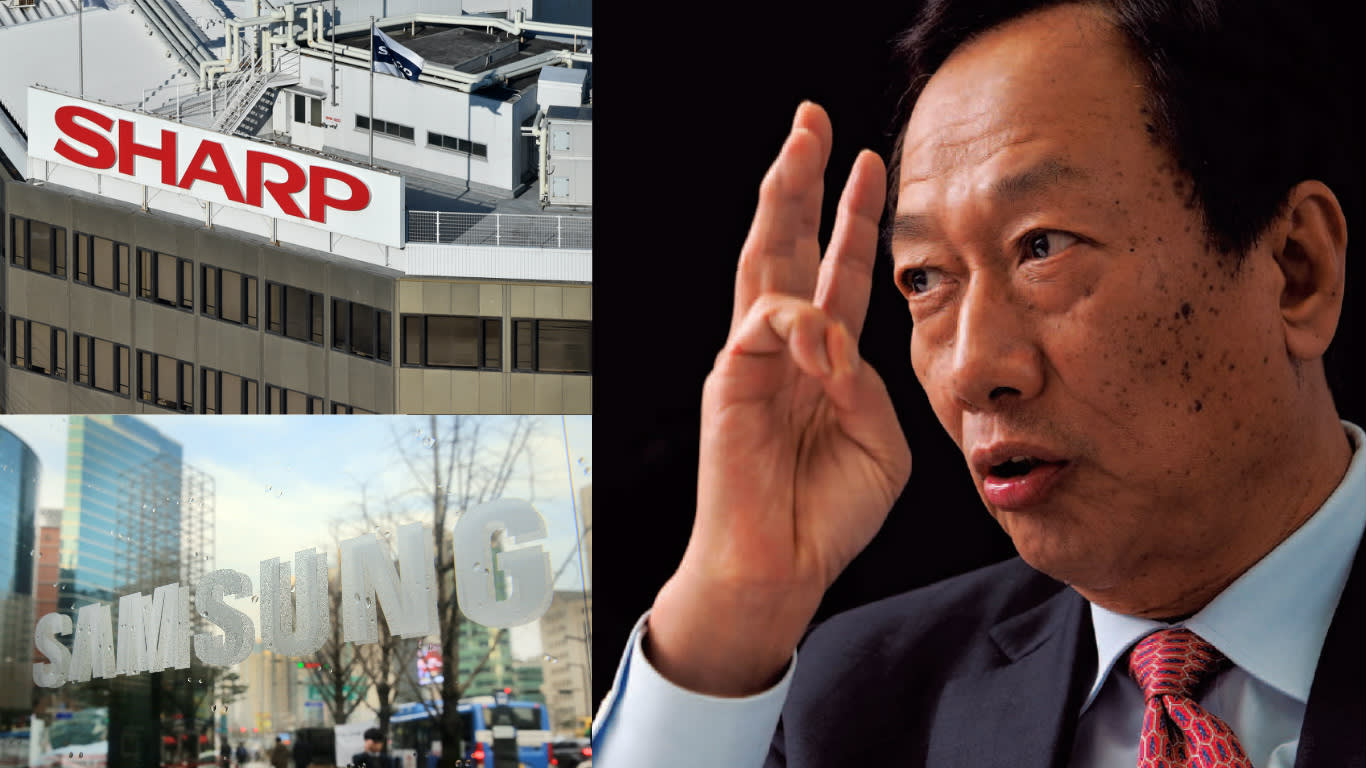 OSAKA --  After five long, hard years of preparations, the decision of Hon Hai Precision Industry, better known as Foxconn Technology Group, to take over Sharp is now being referred to as a dream come true for Hon Hai Chairman "Terry" Gou.

When negotiations began, Samsung Electronics, the world leader in digital appliances, was seen as the main suitor vying for Sharp's affections, but the course of true love never did run smooth. The leading South Korean and Taiwanese manufacturers have since tried all manner of tactics to try and win over Sharp.

In October 2015, Samsung Vice Chairman Lee Jae-yong met with a top Japanese bank executive to explain that their intention to help Sharp had only been met with suspicion from the Japanese government, and pleaded for a little assistance in laying out Samsung's position. In response, the executive claimed he had been communicating with the Ministry of Economy, Trade and Industry and other concerned parties about Samsung's readiness to step in and support Sharp, but had not been taken seriously. "I felt Lee was truly interested in Sharp," he said.

The eldest son of Chairman Lee Kun-hee, Lee Jae-yong is vice chairman but has been the acting head of the Samsung group since his father was hospitalized in 2014. When Samsung put about 10 billion yen ($110 million at the time) into Sharp in 2013, he took a leading role in the negotiations. The company's plan to take over the Sharp copier operation in exchange for the investment fell through in the face of opposition from the economy ministry and, aside from Samsung's purchase of Sharp liquid crystal display panels, the partnership has gone nowhere since.

Two months later, Sharp received a direct proposal from Samsung for the takeover of its Sakai LCD panel plant, and a request to conduct an asset assessment early in the new year. The plant has been jointly operated by Sharp and Hon Hai since 2012, with each holding 38% of Sakai Display Products, the company that manages the plant. Samsung's overtures to Sharp were made in the strictest confidence. 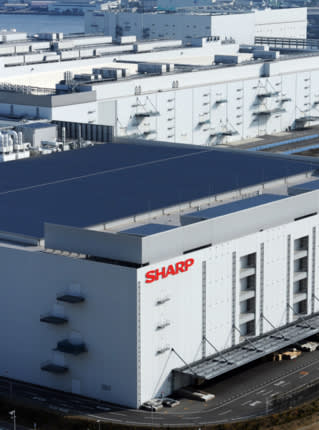 With money tight, the Japanese manufacturer has been selling off anything and everything of value, including office buildings and overseas plants, to raise vital cash. After shifting nearly all its best properties, SDP was the last big asset remaining, with a reported book value of 70 billion yen ($627 million).

"That wasn't the first time Samsung made an inquiry," revealed a Sharp executive. "They've been in touch several times since 2013, the latest last summer. Our honest wish is to sell the shares immediately if someone offers a good price but as the plant is a joint operation with Hon Hai, it won't be easy."

At around 9 a.m. on Feb. 5, Gou appeared at the Sharp head office, beaming at waiting reporters as he announced: "They support the Hon Hai plan and have informed us that we will be given preference in negotiations. I hope to sign a final agreement at 2-3 p.m. today," before disappearing into the building. At 5.30 p.m., Gou re-emerged and declared, "The top executives of both companies have signed an agreement on preferential negotiation rights," proudly displaying a document signed by him and president of Sharp Kozo Takahashi. Claiming that "90% of the negotiation is complete," he headed home to Taiwan in triumph. 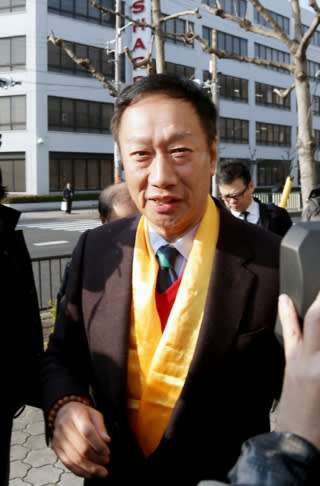 Less than an hour later, Sharp officially refuted Gou's assertions, saying, "We have not in fact given preferential negotiating rights to Hon Hai." Gou's document, according to Sharp, only confirmed the official entry into negotiations.

One Sharp insider said, "Since the very start, we've been doing exactly the same as we did in our negotiations with them four years ago. While he works to turn his speculations into done deals without our consent, he rarely keeps his promises," in reference to investment negotiations that began in March 2012.

At the time, Gou is reported to have driven a very hard bargain, but ultimately Sharp wound up without the roughly 67 billion yen Hon Hai agreed to invest.

Hon Hai had agreed to take a 9.9% stake in Sharp by investing 550 yen per share. But when Sharp's business slowed and the share price fell, Hon Hai first demanded a review of the investment value and that Sharp accept Hon Hai management participation with a revised higher stake. Next they requested the annulment of an agreement on technical transfer related to smartphone LCD panels and disclosure of the fund of LCD-related patents that Sharp has built over the years.

After so many demands, it is not hard to see why the "strategic partnership" collapsed in less than six months.

On Jan. 30, five days before the Sharp board meeting, Gou briefed Sharp executives on the details of his takeover plan. His core emphasis then was reportedly to see the success of the shared Sakai plant. Since it switched to joint operations with Hon Hai, the plant has boosted operations and begun turning a profit. Many industry observers attribute this to Hon Hai's success in finding new customers for LCD panels, taking advantage of its position as the world's largest sales channels for electronic manufacturing services. Lately operating at 70-80% capacity, the plant is performing substantially better than when under Sharp alone.

Gou stressed that he would bring the Sakai model to all of Sharp's operations. But the mere notion drew derisory remarks from one Sharp executive, "The Sakai success? It's half illusion. Nobody thinks it was Terry's masterful performance." When the initial investment was made, Hon Hai and Sharp each committed to buy roughly half the LCD panels produced at the plant. "Hon Hai only recently started honoring this agreement," revealed an SDP insider. He says that for all its supposed acumen in taking products to market, Hon Hai largely struggled to make its 50% commitment. Behind this were struggling sales at U.S. TV-set maker Vizio and lower-than-anticipated sales to Sony. "We often asked Hon Hai to follow through on the commitment, but no sincere reply came back," said a former Sharp executive.

Sharp, on the other hand, purchased at least half the SDP panels as stipulated for nearly the entire span of the contract. What caused this reversal of positions boils down to their respective relationships with Samsung, the world's top electronics maker.

A suitor for Sakai

Samsung holds 27% of the world TV-set market, according to IHS Technology. Many of the panels for its 60-inch and larger models come from Sakai. The efficient production of large, high-quality panels is what prompted the Korean giant to approach Sharp over its SDP stake. Moreover, taking on an existing, highly-efficient plant for its 10th-generation products would require a fraction of the investment of building an entirely new one, even if the book value were doubled.

Many at Sharp were aware of Samsung's interest and were surprised at the reaction. "We're puzzled to hear Hon Hai boast about the 'Sakai Model,'" said a Sharp insider. "The Sakai plant is often referred to as a success model for the Sharp-Hon Hai alliance, but the truth is a bit different. Sharp is maintaining the high operation rate by keeping Samsung as a customer. Hon Hai has not explored the market enough to win such stable, volume-order customers," said a Sharp insider.

That Gou could have missed that point seems far-fetched. Hon Hai now makes 15 trillion yen in annual sales on the leverage of consigned iPhone production for Apple. When Hon Hai partnered with Sharp four years ago, its intention was to overthrow Samsung as both belonged to the "Apple pyramid," in which Sharp produces LCD panels, the key iPhone parts, and Hon Hai assembles them into complete products. Samsung and Apple are hardly the best of friends, fighting over top spot in the global smartphone market and repeatedly facing off in court over patent issues. The negotiations are shadowed by a maturing smartphone market, characterized by slowing iPhones sales.

With the maturity of the smartphone market, Apple is losing steam. For the January-March quarter it has revealed a plan to reduce production of the iPhone 6s and 6s Plus, which only hit the market in September 2015, by about 30%. Aiming for further growth, Hon Hai may be seeking a new, bilateral relationship with Samsung.

Now the world's leading electronics company has all but lost interest in Sharp's technology. Japanese electronics companies are reduced to making alliances, but hold little sway in the world market and pose no threat to the likes of Samsung. "The world power map for digital appliances would change again if Sharp and others ally with rising Chinese and Taiwan concerns, which bring ample funds to the table. That's why Samsung is working to strengthen its relationship with Japanese companies," said a security-house source close to Lee Jae-yong. The most ambitious of all vying to change that power map, it appears, is Terry Gou.

"Sooner or later Terry will transfer some SDP shares to Samsung as an incentive for stronger ties," predicted a Japanese executive in the Hon Hai group. A source close to Samsung said, "If Hon Hai takes over Sharp, we'll have to redefine our relationship with Sharp, which includes the question of whether to maintain capital ties."

When the takeover negotiation concludes, it is unclear how the Samsung wild card will be played but the power struggle among appliance giants on the Asian stage is far from over.