Duterte a boon for souvenir dealers

In the Philippines, pollsters might want to keep an eye on T-shirt sales 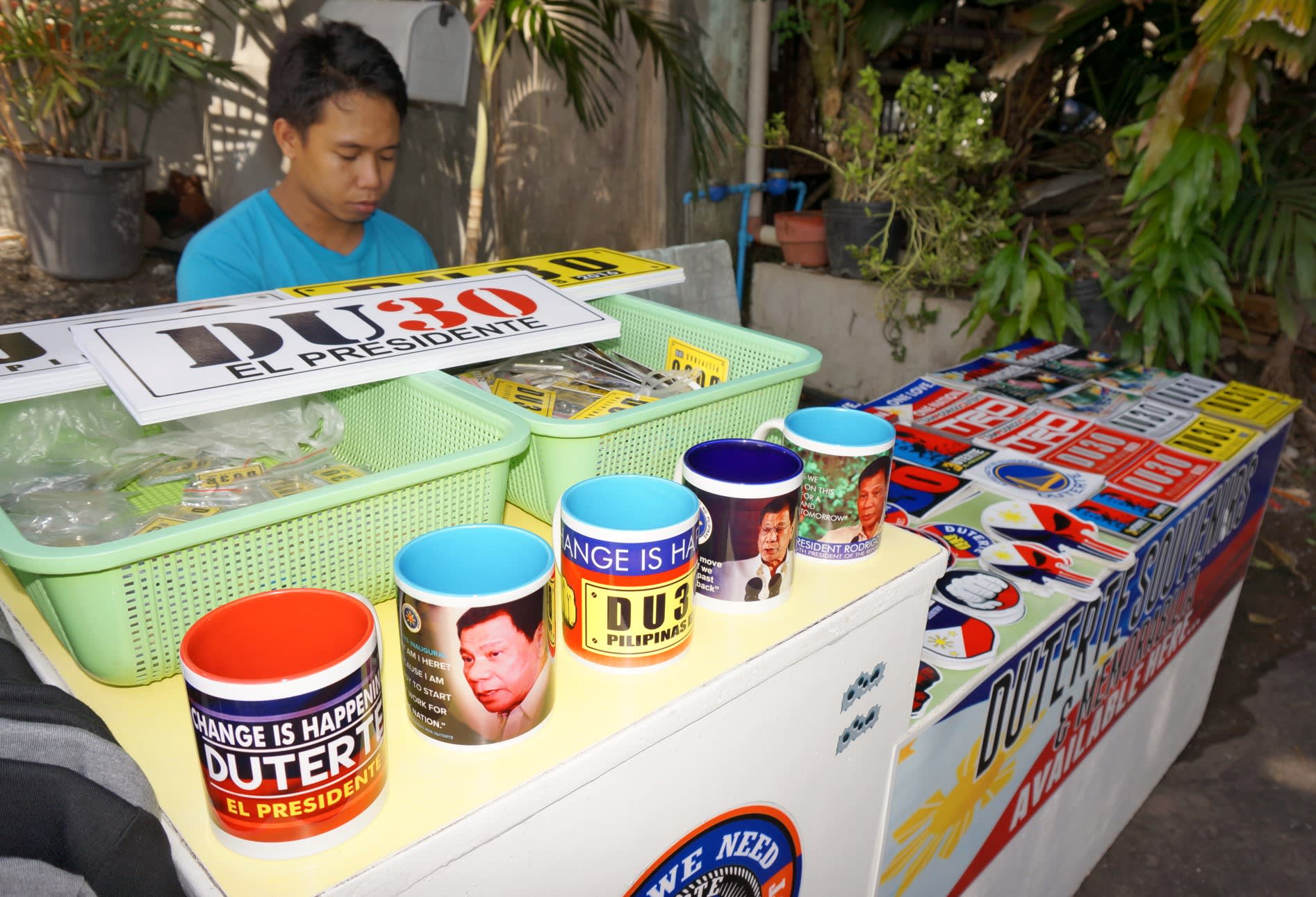 DAVAO, Philippines -- T-shirts, mugs and all kinds of other products featuring the likeness of  President Rodrigo Duterte are flying off shelves in his hometown in southern Philippines, a clear sign that the tough-talking president still enjoys rock star status.

Duterte's home in Davao City in Mindanao has become a popular tourist site.

Nearby, a row of stores sell Duterte character goods.

A plate shows the popular "DU30" logo in a license plate format.

With his poll numbers still running high half a year since he took office, the Duterte boom seems likely to have an extended run.

Lucila Laoang, a 60-year-old accountant from Quezon, a city in the northern part of Metro Manila, was shopping at makeshift stores near the president's home in Davao to buy Duterte-inspired merchandise, including items requested by her husband and son.

She made her pilgrimage to the president's home while in Davao for a conference. Duterte was the city's mayor for more than two decades before becoming the country's leader in May.

Laoang bought two caps featuring Duterte, priced at 180 pesos ($3.61) each, and a 25 peso magnet. After paying for her purchases, she immediately went to another store and started browsing.

A 75-year-old man who was on a business trip from Singapore bought a T-shirt and a sticker.

A sales clerk at a store selling Duterte-themed T-shirts and mugs said some 100 items had been sold on the day I visited. Sales have remained strong and steady since the inauguration, the clerk said.

Duterte's home, located in a residential area in central Davao, fits the president's reputation as a man of the people. It is in an unassuming two-story house where he still spends weekends. Tourists are allowed to come close after going through security checks.

At Paintline, a T-shirt wholesaler in Davao, workers were busy packing printed tops into bags when I showed up. The company created five different Duterte-themed T-shirt designs.

Kevin Descalsota, a 25-year-old employee, said most of the Duterte T-shirts had already been sold, and that a lot of overtime work was needed to fill all the orders.

Many of these Duterte goods show images of the president sticking out his fist in his signature pose or bear the words, "The Punisher," a nickname given to him for cracking down on drug users.

His name is commonly spelled "DU30" on T-shirts. The spelling comes from the local pronunciation of the English word "thirty," which sounds somewhat like "terte." The abbreviation is frequently used in newspaper headlines as well.

It is also used on hot-selling ornaments meant to resemble license plates. Priced between 200 pesos to 300 pesos, the plates are staple items at half a dozen stores along a major street in central Davao. This T-shirt features a likeness of Duterte's face along with his nickname, "The Punisher."

A coffee shop in the city has been selling "Dutertea" since the former mayor ran for president.

The recipe is a mixture of two popular lattes -- Japanese matcha green tea and durian -- topped with a heap of whip cream. It is very sweet, which does not seem to fit the image of the foul-mouthed leader.

Duterte has made a slew of controversial remarks. He once called U.S. President Barack Obama a "son of a whore" and directed a "go to hell" his way.

He has also continued acting like a dictator, especially in his bloody war against drug users, which has led to a spike in extrajudicial killings.

Still, Duterte is riding high in opinion polls. He enjoys strong and broad support among Filipinos fed up with rampant crime and corruption. His approval rating stood at 76% at the end of September, according to a survey by the pollster Social Weather Stations.

Duterte has stepped into controversy, like he did in deciding to bury the remains of Ferdinand Marcos, the country's long-ruling dictator, within the heroes' cemetery.

The decision has been followed by a series of demonstrations.

Should Duterte continue playing with controversy, he might someday trigger a major public backlash.

If a popular leader keeps tuning out dissenting voices, one day he could find his public standing -- and sales of coffee mugs -- on the decline.

Going forward, those sales could prove to be a good gauge of the president's popularity.