TOKYO -- A swelling wave of mergers and acquisitions is sweeping through Southeast Asia, as companies in the region gear up for more economic integration in ASEAN.

In 2014, the total value of acquisitions involving companies operating in the Association of Southeast Asian Nations exceeded that in Japan. Deals between Southeast Asian companies accounted for nearly 70% of the total, amid a growing trend toward cross-border expansion and industry consolidation in the region.

Companies in the economically dynamic market are trying to improve their strategic positions before the ASEAN Economic Community, or AEC, comes into being at the end of the year.

Buying a way in

The value of buyouts and stake purchases involving Southeast Asian concerns rose 12% in 2014 from the previous year to $68.4 billion, according to Thomson Reuters, exceeding the value of Japanese companies purchased, which came to $64.7 billion. This was the first time since the turn of the century the value of acquisitions was greater in Southeast Asia than in Japan. 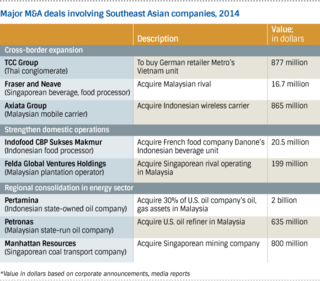 The total for the region would have hit a record $86.9 billion if an abortive three-way bank merger valued at $20 billion among CIMB Group Holdings, Malaysia's second-largest bank, and two other Malaysian lenders had gone through. The M&A boom is driven by companies in the region.

The AEC, which will free up flows of people, goods and money, looms large in the buyers' thinking. A growing number of companies are seeking to bulk up to survive in a larger, integrated market.

In one high-profile deal last August, TCC, a Thai conglomerate, agreed to buy the Cash & Carry chain of discount wholesalers in Vietnam from German retailer Metro for 655 million euros ($877 million). TCC has an array of businesses, including Thai Beverage, and spent nearly 1 trillion yen ($7.2 billion at the time) in 2013 to acquire Fraser and Neave, a big Singaporean beverage maker. It is trying to become a regional powerhouse through its acquisitions.

Others in the food and beverage industry are also on the prowl. In August, Fraser and Neave bought Yoke Food Industries, a Malaysian rival, expanding its sales network in Indonesia and Cambodia.

Indofood CBP Sukses Makmur, Indonesia's biggest food maker, acquired Danone Dairy Indonesia, a local unit of the French food giant, for 250 billion rupiah ($20.5 million at the time). The company, which controls 70% of Indonesia's instant noodle market, made the move to bolster its beverage business at home. It faces stiff competition in the market of 250 million consumers from Charoen Pokphand Group, a Thai conglomerate with competitive food businesses.

Axiata Group, a Malaysian telecom company, purchased mobile communications carrier Axis Telekom Indonesia. That move increased Axiata's subscribers in Indonesia by 16% in the business year ending June last year, making it the No. 2 player in the country's mobile market. The company is betting the acquisition will help it catch up with Singapore Telecommunications, the largest telecom company in Southeast Asia.

In the energy sector, falling oil prices have sparked regional consolidation. Indonesian state-oil company Pertamina agreed to buy 30% of the oil and gas assets of Murphy Oil, a U.S. company. 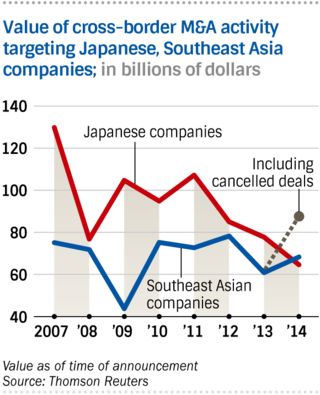 One area that remains quiet is financial services, where the failed merger by CIMB was the only significant activity last year. ASEAN has agreed to liberalize its financial markets, but many countries in the club fear domination by cash-rich Singaporean and Malaysian banks. In a move bucking the liberalization trend, Indonesia in 2012 lowered the maximum stake a foreign investor can take in an Indonesian bank to 40% from 99%.

Another obstacle to buyouts is the varying sizes, levels of economic development, and legal systems in ASEAN countries. Unlike in Europe, cross-border mergers and acquisitions are unlikely to take off in Asia, said Magnus Bocker, CEO of the Singapore Exchange. A survey by A.T. Kearney, a U.S. consultancy, however, found around 40% of chief executives said M&As will be a shortcut to growth after the establishment of the AEC. The boom in corporate buyouts in Southeast Asia appears set to continue.

Toru Takahashi in Jakarta, CK Tan in Kuala Lumpur and Tomomi Kikuchi in Singapore contributed to this report.