SINGAPORE -- Education technology startups within the Association of Southeast Asian Nations are striving to expand their reach as the coronavirus pandemic cuts off traditional classroom learning for many students.

The sector has seen interest heat up, with people forced to turn to online channels to continue their education due to social distancing measures to stem transmission of the highly contagious virus.

According to a report released in November by internet group Google, Singapore state investor Temasek and U.S. consultancy Bain and Company, COVID-19 has rapidly accelerated the growth of edtech, with installations of the sector's top applications in the ASEAN region growing three times, from 6 million between January and August last year to 20 million in the same period this year.

Thai edtech startup OpenDurian belongs to a growing movement of digital education players looking to make a meaningful difference for learners within Southeast Asia in an industry which consultancy Frost and Sullivan has projected will see global revenues of more than $40.9 billion by 2022.

The company offers lessons via the internet for those hoping to improve their English, tapping snazzy animations and bright colors in videos to draw the eye and keep learning online interesting.

"Edtech, or any technology, will never be able to replace classroom teachers. It is more like new technology will help free teachers from some repetitive tasks," Chula Pittayapinan, OpenDurian's co-founder, told Nikkei Asia.

By eliminating some of the more mundane tasks, from rote delivery of lessons to the marking of test papers, Chula believes teachers can focus on more meaningful pursuits in education, such as personalized coaching and mentoring.

Besides English, OpenDurian covers subjects including mathematics and biology. Portions of its learning materials are available for free, but users of its platform need to pay a fee to utilize a fuller range of online education resources offered by the startup.

Founded in 2013, the company attracted over 5 million Thai-speaking users last year, generating revenue of over $2.2 million. College students and first-time jobseekers formed its core customer base.

In exchange for a small stake in the company, Thai accelerator Stormbreaker Venture gave OpenDurian seed funding and mentorship opportunities to sharpen its business strategy and networks within the education sector.

Stormbreaker has grand plans to shake up the education space in Thailand. "We aim to change [ways of] learning for 1 million Thai learners by providing technology-enabled, innovative solutions to provide equal access to those who might otherwise not receive such education," Jantanarak Tuekaew, managing director at the accelerator, told Nikkei. Amitabh Jhingan, partner at education strategy consultancy EY-Parthenon, said edtech players could help level the playing field for those facing difficulties getting to a physical classroom, as had been the case during the pandemic. "It allows learning to happen in a much more convenient manner, which is, people can actually learn at home," he explained.

The cost of education could also be lowered, as teachers do not have to be physically present in the same room as students, with internet streaming or videos able to amplify one lesson beyond the confines of time and space, Jhingan added.

Stormbreaker and another edtech accelerator, Singapore's EduSpaze, are collaborating to help startups scale up further in the region.

With backing from Enterprise Singapore, the city-state's agency tasked with supporting the growth of small companies, EduSpaze was launched last year and has called for edtech startups to apply for its accelerator program.

Through EduSpaze, Enterprise Singapore aims to groom some 20 startups over the next two years. The agency offers support to defray up to 70% of costs associated with developing programs for mentoring such tech players.

"Accelerators are important partners in the startup ecosystem as they nurture startups and assist them in fundraising, tech sourcing, product development, commercialization and internationalization," a spokesperson for Enterprise Singapore told Nikkei.

Niko Lindholm, EduSpaze's program director, told Nikkei that his accelerator was working with Stormbreaker to bring Thai edtech companies under its roof, and to send Singapore players to explore the Thai market.

"Both in Singapore and in Southeast Asia, you have a fragmented network of organizations working in this field, but there is no ecosystem driver, in that sense, in the edtech sector. So we want to be that organization which more or less glues the whole network together," he said. 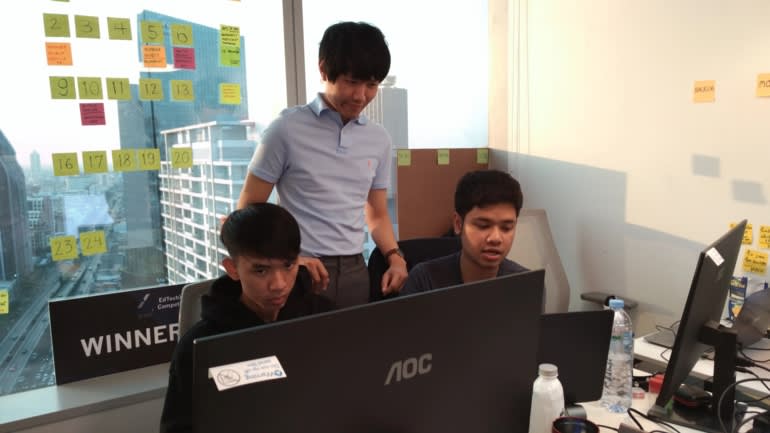 Shin Wangkaewhiran, middle, founder of Thai education technology startup Vonder, has plans to expand his business beyond Thailand, and is looking to hire more tech talent. (Photo by Dylan Loh)

Thai startup Vonder is poised to be a beneficiary of EduSpaze's efforts to help upstarts expand overseas. The edtech player produces online micro-learning modules for companies to teach employees new skills through educational gaming content. Like OpenDurian, it was a member of Stormbreaker's accelerator program.

Like Vonder, Singapore-based LingoAce, an edtech player offering an online language learning platform, has its sights set on brisk international expansion. It announced plans to expand into Indonesia in November.

The company plans to hire more than 500 local staff to cater to 200,000 registered students in Southeast Asia's most populous country by 2022. Its first product for the market is online Mandarin lessons.

"We believe that our cross-border online language classes not only connect Indonesian students to experienced native-Mandarin speaking teachers, but also offers an engaging and efficient means catered to the learning habits of digitally-savvy young learners. We therefore look to scale up our platform to benefit more Indonesians," said Hugh Yao, founder and chief executive of LingoAce.

Edtech startups have been a draw for investors. LingoAce's expansion into Indonesia came as it accounced a series A+ fundraising of $6m led by Sequoia Capital India and Shunwei Capital, which joined the round as a return investor.

Singapore-based startup Tenopy, which offers virtual learning workshops, has raised over 1.5 million Singapore dollars ($1.1 million) from three venture capitals in its home country, China and Japan since it launched in 2017.

Soh Chong Kian, founder and chief executive of the startup, told Nikkei: "The pandemic has made digitalization a new norm and drastically accelerated the adoption of elearning, that comes with natural merits such as efficiency, easier accessibility [to high-quality teachers, interactivity and affordability."