China's cram schools scramble out of tutoring as crackdown looms DALIAN, China/HONG KONG -- After-school tutoring and test-prep companies in China are racing to reassess their operations and change their focuses after Beijing sent shock waves through the sector with new regulatory restrictions last month.

The clampdown is also unsettling investors that have poured billions of dollars into both listed and IPO-headed companies that until recently looked like golden opportunities.

TAL Education Group, an operator of about 1,100 tutoring sites, said last month it would strengthen its existing operations of foreign languages and support for studying abroad, bringing them under a single brand to boost consumer recognition. It also planned to focus on lifelong learning, a senior official said.

The announcement came shortly before the Chinese Communist Party and the State Council on July 24 issued sweeping overhaul measures targeting the test prep and tutoring industry. Under the new rules, for-profit companies must register as nonprofits and are barred from going public for fundraising. They also cannot offer subjects that are taught as part of compulsory education or hold classes on weekends or holidays.

Beijing's new policy further prohibits foreign players from taking part in managing these companies through acquisitions or other means, while no new entrants into the industry will be approved. The changes will take effect on a pilot basis in major cities, then be rolled out nationwide.

With competitive entrance exams and higher income, parents in China are increasingly spending money on tutoring and test prep. Faced with a slowing birthrate, Chinese President Xi Jinping is clamping down on the sector to make it more affordable for couples to have more children.

Some companies had known about the overhaul beforehand because government officials had discussed "the industry's future" with them, according to local media group Caixin. Businesses are already making moves to enhance their chances of staying afloat, including bolstering offerings unrelated to China's nine-year compulsory curriculum. 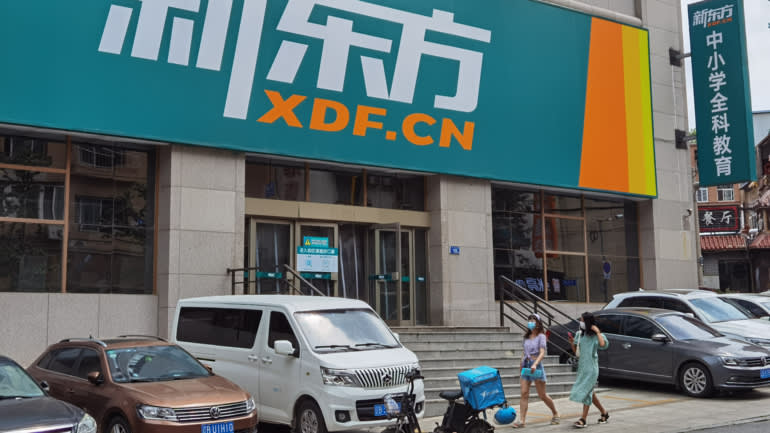 New Oriental Education and Technology Group's revenue climbed 16% for the year ended May 2020, but the company is expected to be hit hard by the new restrictions. (Photo by Shin Watanabe)

For instance, Suzhou Kingswood Education Technology on July 26 announced it acquired a high school and a vocational school, neither of which is subject to the new limits. The company will focus on areas such as vocational training to alleviate "risks" from the new policy, it said.

Talkweb Information, a software developer for education companies, said July 26 that it had sold off all shares in its business for compulsory education, marking an exit from this field.

Nevertheless, the new regulations are dealing a serious blow to businesses previously considered the industry's unicorns with valuations well above $1 billion as well as to their powerhouse investors. These include Yuanfudao, an educational technology startup valued at an estimated $15.5 billion and backed by Tencent. Online tutoring service Zuoyebang said at the end of 2020 that it had raised more than $1.6 billion from investors, including online retail giant Alibaba Group and Japanese tycoon Masayoshi Son's SoftBank Group.

Unicorns especially stand to lose out. The ban on initial public offerings has foiled investors' vision of selling their shares to the public to gain massive returns. "Even if we wanted to unload the shares, no one would buy them, so we're stuck with them," said an executive at a company that invested in a unicorn in the sector.

To date, about 30 of the roughly 70 Chinese-listed companies in the education sector have released statements in response to the shake-up, with 14 stating they are bracing for or may see a material impact on their earnings.

China's education market grew 79% between 2016 and 2019 to reach 925.1 billion yuan, according to research firm iResearch. After contracting in 2020 due to the pandemic, the market was projected to rebound this year to its 2019 level. Now it is expected to shrink drastically.

Among the casualties of the overhaul are tutoring companies that are already publicly traded. With strong business growth for school-age children up to and including high school students, New Oriental Education and Technology Group posted a 16% jump in revenue to $3.5 billion for the year ended May 2020. TAL Education's revenue had also been soaring, with a 37% surge in revenue to $4.4 billion in the year ended February 2021. Both companies are expected to be hit hard by the new restrictions.

New Oriental's total revenue will likely decline by 42% to 64% over fiscal 2022 and fiscal 2023, said Candis Chan of Daiwa Capital Markets Hong Kong, who estimated that 78% of the edtech company's sales come from the business targeting kindergarten to high school-aged students.

Chan sees revenue at TAL Education slumping by 35% to 66% from fiscal 2022 to fiscal 2024. Now that the companies are barred from offering classes during weekends as well as summer and winter holidays, their session hours are set to decline.

To stay viable, publicly listed companies in the sector may be forced to spin off their compulsory education operations or risk facing delisting, according to a report from Citic Securities.

Investors are fleeing education stocks. New Oriental shares plummeted 66% between July 22 and Monday, while China Beststudy Education Group tumbled 60% during the same period. Gaotu Techedu and TAL Education, both listed on the New York Stock Exchange, were hit by similar slides by Friday.

It is also feared that the overhaul will trigger job losses in the industry, thus hurting the broader economy at a time when it is recovering from pandemic-induced slowdowns.