Iris Hsu stands on a bridge in Paris on a visit last year. The 23-year-old student from Taiwan dreams of working in a Milanese fashion house but is having to take classes online from an Italian university from her home in Taipei. (Photo provided by Iris Hsu)
COCO LIU, CHENG TING-FANG and LAULY LI, Nikkei staff writersMay 26, 2020 11:52 JST | East Asia
CopyCopied

TAIPEI/HONG KONG -- Iris Hsu is only 23, but she is clear about what she wants to do with her life. The marketing student from Taipei dreams of working in a Milanese fashion house, and she hopes COVID-19 is not going to stop her.

Hsu has to stay up late each night for online classes after a travel ban prevented her from returning to her studies in Italy, where she is in the final semester of a graduate program in fashion and luxury brand marketing. But her future remains clouded by the pandemic.

"I have already applied for more than 20 internships in Milan, but have not heard anything back," Hsu told the Nikkei Asian Review.

She is stuck thousands of kilometers away from prospective employers, and the pandemic has wreaked havoc on the luxury goods industry, but she is in the same boat as many other aspiring young professionals. One friend was offered an internship and later told that all openings had been closed because of the pandemic. Hsu seriously doubts her chances at such a difficult time.

Countless students due to graduate this year are watching their dreams shatter as the world tumbles into recession. Health risks and travel bans have separated many from their chosen institutions overseas.

Students from Asia, particularly China and India, make up a large proportion of the international students enrolled around the world. In the U.K., 121,000 fewer international students will commence their first-year studies this year, according to a report in April by the University and College Union in London. With domestic enrollment also down, a funding shortfall of 2.5 billion pounds (about $3 billion) is expected there along with the loss of 30,000 university jobs. That was particularly bad news for Liu Yundan, 25, who had been celebrating Chinese new year at home with her family in Chongqing. She was unable to get back to the Gold Coast for her final semester in hotel management. Liu has found it difficult to participate in the substitute online courses offered by her university because critical internet services like Google and WhatsApp are banned in China.

"I was supposed to graduate by the end of this year but that has been pushed back to 2021," said Liu, whose hopes of returning by the end of June for the next semester are also dimming. "I still have not received any notice on when Australia will lift its travel ban."

Students still on course to complete their studies face other challenges. Varun Tulsai, 24, an Indian studying data science in Vancouver, has applied for more than 100 jobs since April with only 30 responses so far as companies shut down recruitment. "Even if they reopen, I don't feel very confident about finding a job in an industry I desire," he told Nikkei.

Competition is strong. Canada saw record unemployment in March, and many much more experienced workers have been forced back into the job market. On one occasion, Tulsai found himself competing for an entry level job against candidates with a postgraduate degree and years of work experience. "How would I get hired in that situation?"

Amy Lam, another data science student in Vancouver, has similar concerns. "Beginners like me are likely to be hit the hardest by the pandemic," she said. "As many companies now work from home and are unable to provide training, they would prefer to hire someone who can hit the ground running."

Returning to Hong Kong might provide a solution, but Lam is not keen. "If we study abroad, we want to stay abroad," she said. She is still looking for a job that fits her education. "If I can't find one, perhaps I can at least hang in with a job at a restaurant or supermarket."

Smit Shah, 25, has worked for years to save up for his overseas tuition but may now have to cancel his application. He had planned to enroll in a Canadian university in September, but is now stranded in his home city of Mumbai with visa services suspended and travel banned. The offer of digital tuition is not appealing.

"I cannot get the experience, the culture, and the fun of meeting new people by studying from India," he told Nikkei. "If I spent a large sum but could not go, then I would have to pull out of my plan." 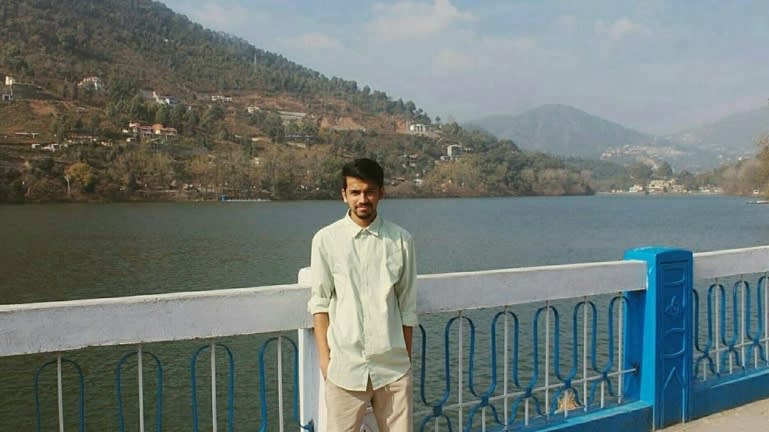 Smit Shah had planned to enrol in a Canadian university in September, but is now stranded in his home city of Mumbai with visa services suspended and travel banned. (Photo provided by Smit Shah)

A survey conducted by the British Council in April found that among 1,493 respondents from South Asia, 29% of students from India and 35% from Pakistan have already canceled -- or are likely to cancel -- plans to study in the U.K. this year.

There is similar reluctance in other parts of Asia. Only 6% of students from Thailand with firm university offers in the U.K. have confirmed they wish to start in September as planned, according to UKEAS, an education consultancy. A recent UKEAS survey produced a figure of 8% for Taiwan, 17% for the Philippines, and 61% for Malaysia. "Many offer holders are still uncommitted and waiting to see what happens in the U.K. before making a final decision," Yin Lee, a UKEAS overseas study manager, told Nikkei.

Sun Bo, a director with Guangzhou-based EIC Education, said that the pandemic has not lessened the desire to study abroad among Chinese students she meets. "But if the coronavirus outbreak continues into the summer, we will certainly see an adverse impact on the number of outbound students from mainland China, and that impact will not be insignificant," she said.

Sun believes, however, that students already studying abroad have bright futures. "As soon as the pandemic is over, there will be pent-up demand from all industries," she said. "No matter if you want to find a job or migrate to a foreign country, you will have the chance."

Hsu, meanwhile, sits in Taipei remembering field trips along Milan's streets as she joins Zoom teleconferences. These cannot make up for the showroom visits and networking events she once took for granted -- crucial elements in her decision to study abroad.

An online banner from Hsu's 85-year-old university, located near Via Montenapoleone, one of Europe's most upmarket shopping areas, reads somewhat ironically: "Always there to guarantee your future."

Few have that kind of comfort these days. "My original plans are now up in the air," said Hsu.