English only: Japan colleges teach how to speak with the world TOKYO -- Nestled in the wooded mountains of Japan's northwest lies a small liberal arts college that has pioneered an all-out method to raise the English-language skills of its students -- total immersion. All classes and daily interactions are conducted in English at the school.

Japan has long worked to raise the English ability of its population, without which interacting with the rest of the world is much more difficult. But because of limited contact with native speakers, verbal fluency is still rare.

Akita International University is a 10-minute drive from the airport, but the setting is rural. There are no convenience stores within walking distance and downtown Akita city is a more than 30 minutes away by car.

Half of Akita International's staff are foreign nationals, as are 20% of the students. Enrollment totals 900, and roughly 80% live on campus. Freshmen are required to live with overseas students in dorms.

Class size averages 18. A sociolinguistics course headed by Leigh Bennett, a British national, had only seven students during one visit. Bennett's lecture focused on dialects, and students joined in the discussion of the impressions that dialects have on a listener. One person said that using the standard dialect makes a speaker appear intelligent.

Akita International is a public university that admits students who pass Japan's standardized entrance exam. But the school automatically grants a perfect score for English when an applicant demonstrates a level of fluency in other tests. 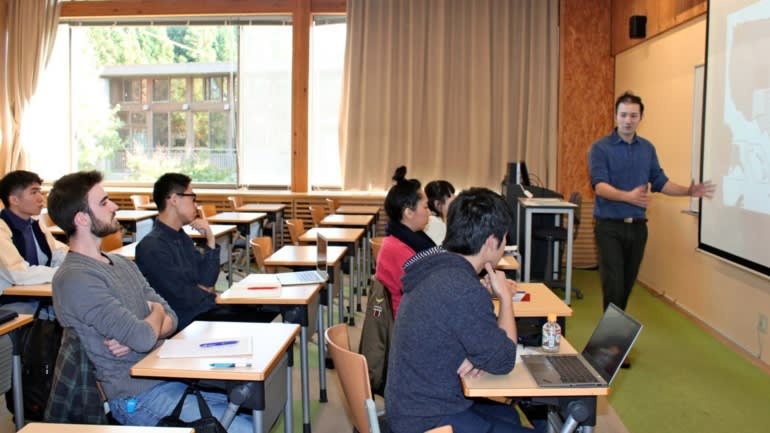 If a student receives at least a 72 on the Test of English as a Foreign Language, or TOEFL, for example. However, Akita International does not set a minimum requirement of English ability for prospective students.

New students enroll in an intensive language program matching their English fluency. The program ends in the second-year spring semester (Japanese universities begin with spring semesters). In the following fall semester, the students embark on a mandatory study abroad program with an overseas sister college that lasts an entire year.

Kenta Ito, a senior from Aichi Prefecture, had not attended school outside Japan before college. At Akita, he chose the U.S. as his study-abroad destination.

Though Ito could follow the English used during his lessons in America, he was struck by how different the environment was compared with Akita International. For one, the classrooms were packed with 300 students.

"I think I struggled to make friends and get used to the lifestyle after suddenly studying abroad," he said.

Robert Kauffman, an American exchange student at Akita International, reports a different campus experience. Not only did Kauffman find plenty of international students like himself, he is able to speak in his native language. After helping other students with language, he said he is starting to starting to consider becoming an English teacher.

"When you study overseas -- like the U.S., for example -- you need to change your identity as a Japanese person to the American way," he said. "The burden is enormous." At Akita University, foreign nationals make up 20% of the student body. (Photo by Saiji Ugajin)

Because Akita International is located in Japan, Suzuki said, "Japanese students can immerse themselves in an English environment without changing their identity."

The university made a splash when it opened in 2004. The school initially had few competitors in terms of its educational content, but other colleges have poured resources into global education in recent years.

"We will have to be a more cutting-edge university than before," Suzuki said.

Many Japanese students who graduate from Akita International choose to work at large domestic companies.

"Students are highly aware of playing an active role on the global stage and contributing to Japan," said Toshiaki Mikuriya, head of the school's career development center.

"I use the lessons that dorm life and group work taught me to respect diverse sets of values and apply that to my job," Mikuriya said.

Though the concept of global education is gaining traction at Japanese universities, the number of schools using English immersion remains small.

Even if professors conduct lessons in English, classes typically are filled with native Japanese students who are less than fluent in the language. This mismatch discourages classroom discussions and deep, meaningful learning.

Such immersive learning requires recruiting enough foreign students and educators fluent in English. Class sizes also need to be small, which is expensive.

Yet a number of other universities have emerged to answer the need for skills such as English that will prepare Japanese students to compete in a global environment.

Ritsumeikan reserves 90 spaces yearly for its global liberal arts program. Thirty are given to native Japanese, while the rest are filled by international students, including ethnic Japanese living abroad.

Students at Australian National's counterpart program, which admits 10 people, study at Ritsumeikan for their sophomore and junior years. The two programs share curricula, which lets participants from either school obtain both a global liberal arts degree from Ritsumeikan and an Asia-Pacific studies degree from ANU.

Ritsumeikan's global liberal arts program is the only one in Japan that offers dual degrees to every student, said Tsutomu Kanayama, the program's dean.

Riko Yamamoto, originally from Kobe, always had an interest in other countries and attended a monthlong camp in the U.S. while she was high school. But Yamamoto was unable to go overseas for university. Instead, she enrolled in Ritsumeikan's College of Global Liberal Arts in April.

"You can learn in English in Japan, and studying abroad is part of the program," she said. "It's also great that you can earn two degrees at once."

A dedicated dorm for the program was completed in September. Ritsumeikan hopes alumni will go on to work at international organizations and big consultancies.

Rikkyo University in Tokyo debuted its global liberal arts program in April 2017. The English-only program has just 20 students per year, and many of its 35 faculty members were recruited from outside the university. Students spend the latter half of their sophomore year and first half of their junior year at partner universities abroad.

A freshman chooses to live at a dorm for foreign students so she can be immersed in English. She has a lot of homework and studies late into the night, but is "a sense of fulfillment," she said.

The program "is part of Rikkyo's super global university concept, and it took three years to prepare," said Yasushi Aoki, deputy at the Center for the Global Liberal Arts Program.

The University of Aizu in Fukushima Prefecture specializes in computer science. It is also the recipient of state funding under the Top Global University Project, established by Japan's education ministry in 2014. About half the instruction at Azu University is conducted in English. (Photo by Saiji Ugajin)

Foreign nationals make up about 40% of Aizu's teaching staff, and English is used in the classes half the time. For international students lacking proficiency in Japanese, the school inaugurated the ICT Global Program, in which all classes are conducted in English.

In October, Aizu opened the ICT program to Japanese who wish to participate. Nine Japanese take classes together with 32 international students.

"It's stimulating to learn in a small class with international students," said Shihomi Hashimoto, a Japanese second-year student who switched to the English program.

Hashimoto said she originally was not very fluent in the language. But a Silicon Valley internship in August sponsored by Aizu led to a change of heart.

In California, Hashimoto conducted presentations about her computer program, communicated with fellow engineers and learned about the latest in information technology -- all in English. That gave her confidence in her language skills.

"I was able to perform well using English," she said.

Aizu graduates often seek employment immediately rather than pursue further schooling. Many work for domestic blue chips, but the English courses help develop workers who can succeed at international companies.

"I want to nurture talent who can start businesses overseas," Aizu Vice President Shigaku Tei said. "For that purpose, I aimed to globalize other departments."

"The job functions of the [GLA] teaching staff differ from other departments, and the workload is heavy," Kanayama said.