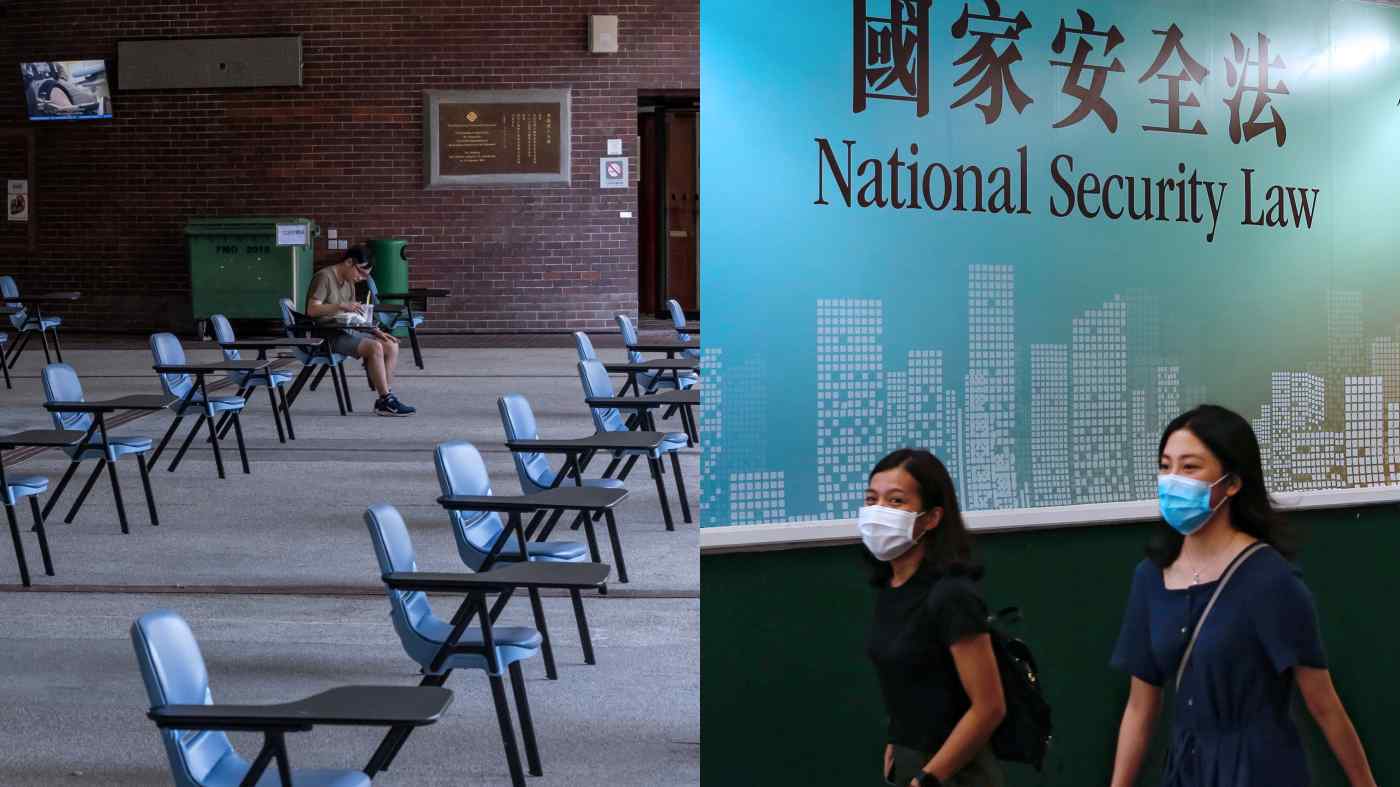 HONG KONG/TAIPEI -- For decades, universities in Hong Kong had been a safe haven for academics in Asia to conduct research and exchange ideas. But for Katherine Chen and other scholars, that is no longer the case.

Chen, a communication professor at Taiwan's National Chengchi University, had planned to publish a research paper about January's presidential election in Taiwan at the Chinese University of Hong Kong early next year. The city's new national security law, however, is giving her second thoughts.

"I am not sure what would be the consequences for me to talk about Hong Kong's social unrest and Taiwan's election on stage," Chen told the Nikkei Asian Review. "Many colleagues who used to have a lot of exchanges with Hong Kong universities have all become reluctant to visit the city following the national security law."

The new law imposed by Beijing carries criminal penalties of up to life imprisonment for those found guilty of separatism, subversion, terrorism and collusion with foreign powers. Critics say the legislation could be used to crack down on dissidents in the former British colony. The sweeping law also applies to non-Hong Kong residents and to activities conducted outside of the territory.

"Hong Kong is no longer that attractive to us. ... In the past, Hong Kong was very popular for academic exchanges because the city is a convergence of Western and Oriental cultures, and a place that embraces diversity and freedom of speech," Chen said. "But now these attractive advantages are gradually vanishing."

Pan Chao-min, a political science professor at Taiwan's Tunghai University, shares the same concern. He said many scholars on the self-ruled island, including himself, have turned down seminar invitations from Hong Kong universities since the national security law was enacted.

"Professors, especially those in the political field like us, are quite reluctant to head to Hong Kong for exchanges or speeches. ... Everyone is very concerned about the consequences of the national security law," Pan said. "The overall academic atmosphere in the city is not like how it used to be." 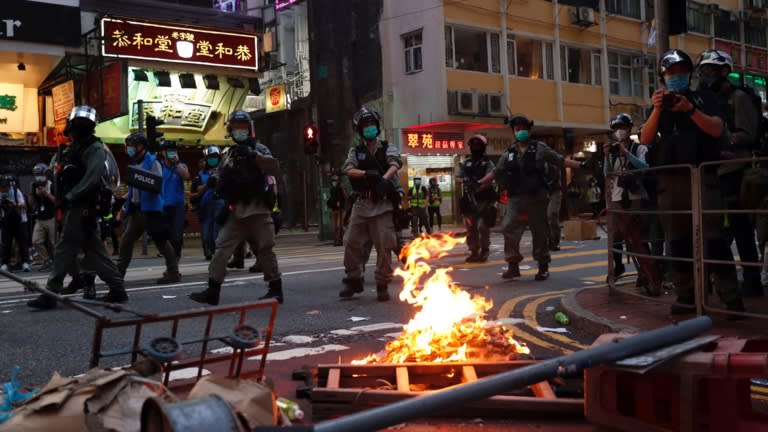 Riot police walk past a fire set by anti-national security law protesters during a march at the anniversary of Hong Kong's handover to China from Britain in Hong Kong on July 1.   © Reuters

Hong Kong had thrived as an international hub for academic exchange thanks to its long-established civil liberties, which facilitated research and discussion of sensitive topics that would have been censored in mainland China.

Back in 2017, Ian Tsung-yen Chen, a politics professor at Taiwan's National Sun Yat-sen University, took part in a book-writing project with academics from mainland China, Hong Kong and Taiwan. They gathered research papers to study how education has shaped the national consciousness of people in the three places.

As the group of scholars sent the book to the Chinese University of Hong Kong for publishing last year, they were notified that the book publication had been suspended indefinitely. "I was told no universities in Hong Kong could publish it anymore, after the protests began," Chen said. "The deteriorating political sentiment in Hong Kong has really affected academic freedom."

Since most universities in Hong Kong are directly funded by the government, universities that were heavily involved in last year's protest are coming under pressure. About HK$ 1.65 billion ($212 million) in funding for three Hong Kong universities was cut due to opposition from pro-Beijing lawmakers in 2019.

That has prompted professors in Hong Kong to tread cautiously, especially younger scholars who have not secured tenure, two contract lecturers at Hong Kong universities told the Nikkei Asian Review on condition of anonymity.

"We now have to think twice before we propose any research or take any interviews," one of them said.

N.R. Liu, a business professor at the University of Hong Kong, said he is concerned that the competitiveness of top universities in Hong Kong will be weakened by the security law.

"It's still not clear whether Beijing could still allow Hong Kong to keep academic freedom, and everyone could study and do research as usual," he said, adding that the attractiveness of Hong Kong universities could suffer in the eyes of top-notch scholars around the world. "That could eventually hit the universities' diversity and future development," Liu said.

The University of Hong Kong is already facing challenges in recruiting talent.

HKU's journalism school had planned to hire a Pulitzer-prize winning journalist to teach a feature writing class in the coming semester, but the visa application process was "unusually long" meaning that the professor had to decline the offer, according to Keith Richburg, the school's director.

Political tensions are not only affecting humanities and social sciences but also research in the hard sciences. Following the introduction of the national security law, U.S. President Donald Trump signed an executive order ending the U.S. Geological Survey's collaboration with the Chinese University of Hong Kong on earth science projects that use satellite sensing.

Washington is expected to continue to roll out new policies after it revoked special exemptions granted to Hong Kong in response to the national security law, as it no longer considers Hong Kong autonomous from mainland China.

"For students and scholars in science, engineering, and technologies, we are wary that the U.S. would suspend many exchange programs as a result of the new law, and that could, in the mid- to long term, hit Hong Kong's edge," said Liu at HKU.

Vivien Liang, director of the Taiwan-based Franklin International Education Group, said the number of Taiwanese students who want to pursue higher education in Hong Kong -- once the most popular overseas destination -- dropped as much as 80% this year.

"The continued unrest and the unexpected COVID-19 outbreak have disrupted the plans of Taiwanese students and their parents. ... The national security law that went into effect this summer was the last straw," Liang said.

"But Taiwanese students now see Japan and Singapore as their more preferable and safer destinations for overseas studies rather than Hong Kong, a previous popular destination," Liang said, adding that the entry threshold for Hong Kong university is lower than last year as a result.

Alan Chen, a 20-year-old Taiwanese student studying finance in Hong Kong, said that although he has been enjoying university life in Hong Kong, he is considering seeking work elsewhere upon graduation, as the future of Hong Kong as a financial center is in doubt.

"I must have a backup plan to seek opportunities in other Asian financial hubs like Singapore or other cities. I need to think of a plan B," he said.

Still, top students and talent from mainland China are filling the vacuum.

"A lot of mainland China students come to Hong Kong for graduate studies because they could not go to the U.S. or other Western countries due to geopolitical reasons as well as the global pandemic," said Liu at HKU. "This can be a silver lining."