India's edtech startups use lockdowns as springboards for growth NEW DELHI -- With his institute in India's western city of Ahmedabad shut in the prolonged coronavirus lockdown, Bhaskar Majumdar opted for the master's program in digital marketing offered by a local online education platform upGrad at a cost of $1,200.

The 47-year-old corporate affairs and digital division chief at an engineering company is satisfied with what he describes as the "rigorous" course. "The investment was worth it for adding a skill for my future," Majumdar told the Nikkei Asian Review. "I would have of course preferred to do it from the campus in Ahmedabad, but, with COVID-19, that is out of the question."

With universities and schools closed, India's edtech sector is cashing in on a rush of interest to become the country's hottest and most profitable tech startup space this year with millions of students going online and professionals seeking to upgrade existing skills or obtain new ones.

The biggest player in the online space in the South Asian country is Byju's, a Bangalore-based startup with a valuation that reached $10.5 billion after its latest funding round from U.S. tech investment company Bond Capital. The undisclosed amount made the company India's second-most valuable decacorn, or private startup worth $10 billion or more, after payment app Paytm.

Founded in 2015 by Byju Raveendran, a son of village schoolteachers, Byju's had turned a profit for the first time in the fiscal year ended in March 2019, well before the novel coronavirus pandemic boosted home learning. The company's revenue increased to $208 million for the year, from $73.2 million a year earlier.

In the fiscal ended March this year, revenue further ballooned to $370 million. It currently has 47 million students online, out of which about 4 million pay for its courses. During only two months between March and April, Byju's added 13.5 million free users to its platform. The company is currently expanding its offerings in India's various vernacular languages, a vast and untapped market. 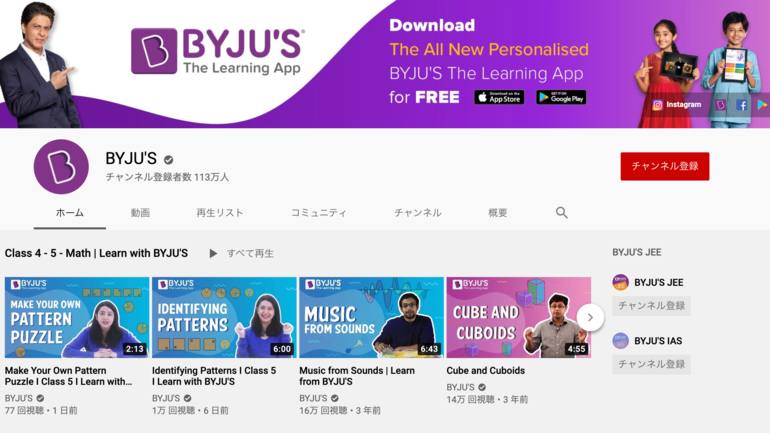 Byju's achieved a valuation of $10.5 billion after its latest funding round from Bond Capital. The company is now India's second-most valuable unicorn. (Screenshot from BYJU'S Youtube channel)

Another edtech platform attracting both investors and students is upGrad. It has spent 1 billion rupees ($13.3 million) over the past year on a proprietary tech platform that provides brick and mortar institutes with the capability to seamlessly replicate their classes online.

Called upGrad Live, it supports multiple assessment formats such as coding tests in its inbuilt coding console, quizzes, individual and group projects for schools, universities and institutions of advanced learning. It also has plagiarism checks, while proctored exams allow for fair grading of assignments.

Its operator, Mumbai-based upGrad Education, says that over 100 colleges and universities in India use upGrad Live with 100,000 students accessing the platform. The company also said that it expects to exceed $150 million in revenue in 2020.

"The pandemic has proved the robustness of the online model, while offline has come to a standstill," said Arjun Mohan, upGrad CEO. "The change is that, very rapidly, online education has now become mainstream, from before when it was just a one-time event. We have already seen working professionals accepting the paradigm shift and switching gears to the online model." 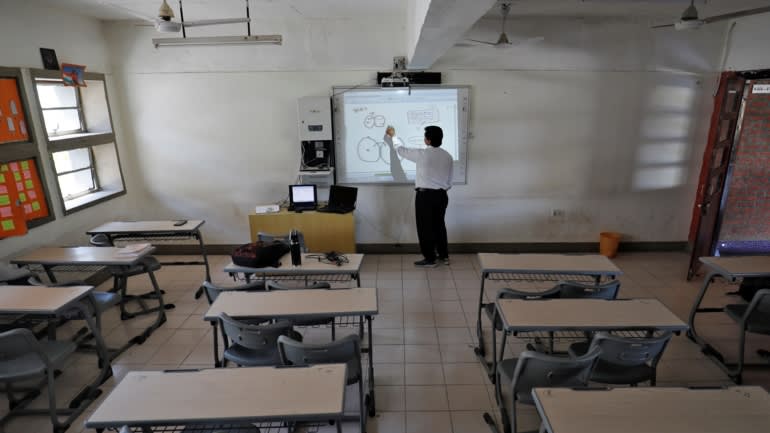 A teacher is shown in an empty classroom at a private school in Ahmedabad, India. The novel coronavirus pandemic is preventing students from attending in-person classes in the South Asian country.   © Reuters

According to the Indian Ministry of Human Resources, the country's school system has 1.3 million schools that annually teach an estimated 250 million students, a figure more than the entire population of Brazil. Research company Technavio estimated that India's online education market is set to expand by $14.3 billion between 2020 and 2024, registering annual growth of over 21% during the period.

The digitalization of skills and education in India has attracted attention from global funds. According to data from Crunchbase, 228 funding rounds have raised $2.3 billion to date this year. The latest was a $100 million series D funding obtained by edtech company Vedantu.

Google said in an online media interaction earlier in July that it has partnered with CBSE, an Indian government body that oversees education, to deliver a "blended learning experience" across 22,000 schools. It has also invested $4 billion in Reliance Jio, the country's largest telecom operator with an estimated 400 million subscribers, where edtech delivery will be one of the focused areas.

There are questions, however, regarding the digital divide in general and uncertainty over government policy with millions unable to afford the new style of education on offer due to the lack of devices or broadband access. The online edtech rush is creating a dangerous gap in India between digital haves and have nots, argues Ambarish Rai, National Convener at Right To Education Forum, a nonprofit organization.

"After the pandemic, [the] situation has become worse," Raj said, adding that India is pushing all schools to begin online education without ensuring students have access to necessary equipment. "Poor parents can't afford to provide devices for their kids due to loss of their livelihood," he said. "Technology should be the additional facility to empower the skill of teachers, not to replace teachers and schools."