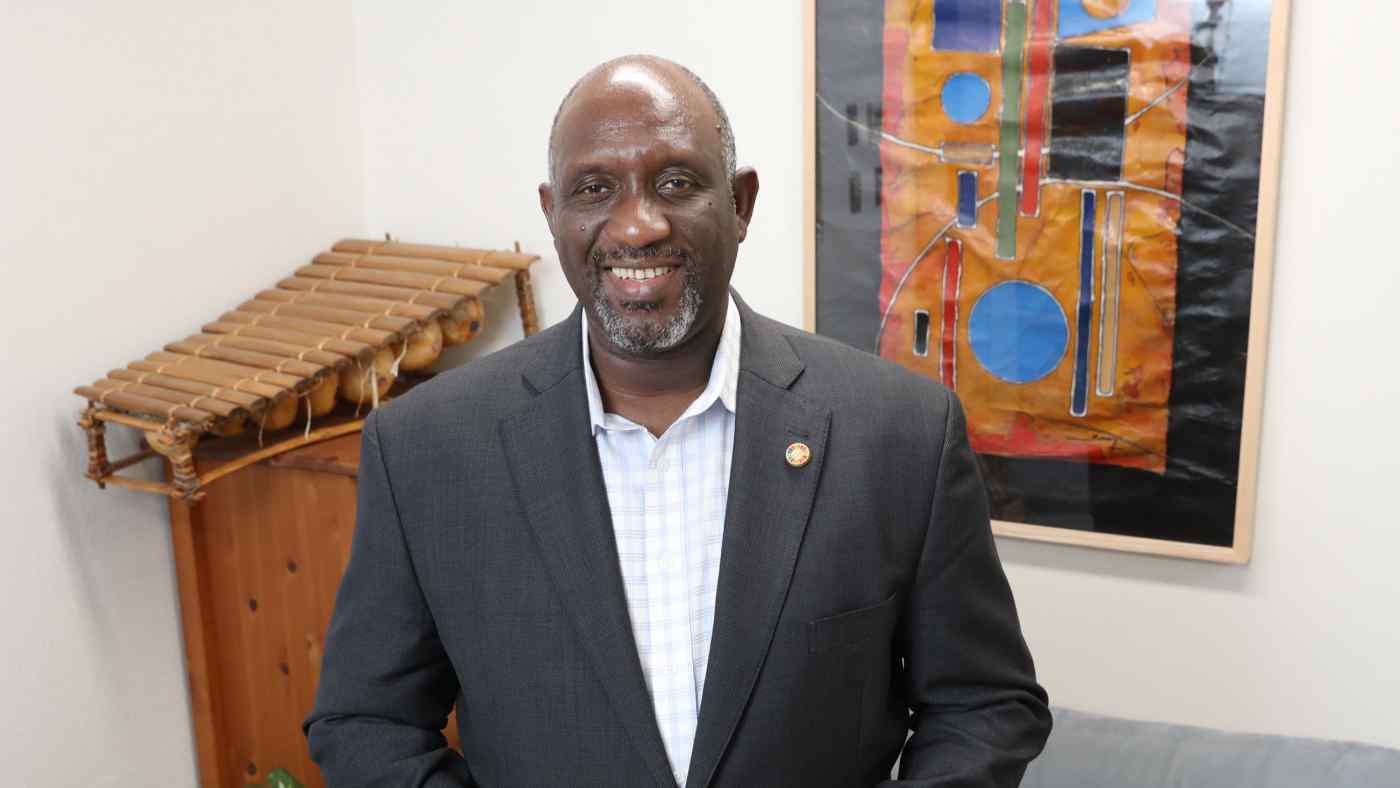 KYOTO -- Kyoto has been Professor Oussouby Sacko's home for the best part of 30 years. A practicing Muslim originally from Mali, West Africa, nearly 13,500 km from Japan, he came here three decades ago via China.

Now 53, Sacko is the first African president of a Japanese university. "Kyoto Seika University has not made me president as an attraction," he said, speaking Japanese fluently in a Kansai dialect.

"I was elected in a vote by the teaching staff," said Sacko. "The school is truly democratic, and sets a high value on diversity."

Kyoto Seika University is located in a rural part of the prefecture of Japan's ancient capital in the west of the country. A private institution, it is noted for its faculties of manga comic books and other facets of popular culture. Sacko was appointed in late 2017 ahead of the 50th anniversary of its 1968 founding.

Seiichi Okamoto, the university's founding president, envisioned a new form of higher learning centered upon "the spirit of freedom and autonomy." As a cornerstone of this philosophy, the university "does not educate through any specific religion [but] respects the truths sought by many religions, and their ethos of sincerity and love toward humanity."

Sacko arrived in Japan in 1991 after graduating from China's Southeast University in Nanjing, and studied architecture at Kyoto University's graduate school of engineering. He became a core figure among some 650 foreign students there. While away researching in Boston in the U.S. he also organized a network for Malians that continues to this day. Instead of joining Mali's civil service after graduating in China, Professor Sacko moved to Japan for further studies.

In his 30s in Kyoto, Sacko set up a young teacher group that met each month for dinners and discussions, and later formed some more focused study groups. He has always believed in the power of mutual learning, and came to be regarded in Kyoto academic circles as an effective leader of minorities.

Sacko believes leaders must be willing to learn with humility from those around them. "It is important that they should be able to say, 'Please teach me,' about things they do not know," he said. "I always strive for humility when I talk with others."

Since becoming president, Sacko has increased overseas enrollment and foreign teachers, and increased the ratio of women in both camps. "I want to make Kyoto Seika University a more diverse community," he said. His wife is Japanese, and they have two children.

Higher education began to blossom in Japan in 1877 after the Meiji Restoration. Today, private institutions make up 77% of the 786 universities around the country, all of which suffer from declining student numbers. Kyoto Seika has approximately 3,000 students enrolled, which is less than two-thirds of its capacity.

"To create a truly diverse society, it is important that racially and culturally different people mingle with one another while recognizing their differences," Sacko said. He believes the mindset of people in the majority must change. "Otherwise, the gap will never be closed." He is interested by initiatives in the U.S. for people in different income brackets to live in the same communities.

Sacko does not advocate positive discrimination that would give minorities preferential treatment to forge institutional change. The university instead significantly adjusted its entrance examination system in 2018. The reform opened doors; it enabled foreign students to take all entrance exams, not simply ones specifically designed for them.

"Some U.S. universities set a target for the percentage of black students," Sacko said. "But giving preferential treatment to minorities results in making them feel isolated. The universities treat them favorably but they also emphasize that they are 'different' people."

In Bamako, Mali's capital, Sacko attended a high school for high achievers. The opportunity to study in China came from a government scholarship.

"I never grew up as an elite person," said Sacko. He remembers studying for his baccalaureate in Bamako by learning with his peers on an equal footing and always admitting what he did not know. "We taught one another, and we made highly effective use of time, in such a way as studying mathematics for two hours and then discussing philosophical problems," he said. Professor Sacko hails from Mali, West Africa, but has made his family, home and career in Kyoto over the past 30 years.

The world leader Sacko reveres most is Nelson Mandela, the former South African president. Working with his predecessor, President Frederik Willem de Klerk, Mandela brought about the abolition of apartheid. The two men were jointly awarded the Nobel Peace Prize in 1993.

"Because Mandela changed the mindset of white people, South Africa was able to abolish the apartheid policy," said Sacko. "Of course, all problems in South Africa have not been solved, but I respect him."

French, English and Japanese books and papers fill the shelves of Sacko's office, while African paintings and sculptures are squeezed into other spaces. This is where the pioneering president makes time for reading and reviews university operations. His main recent outside interests have been community architecture and redesign, architectural conservation, and restoration of historical sites.

In the challenging management environment of a Japanese university, Sacko seldom has the gift of leisure. "I am aware that as president I should keep positive and be the first to say, 'Now let's decide on this.'"