Japan's foreign students struggle to stay and study amid pandemic TOKYO -- A day after Japanese Prime Minister Shinzo Abe declared a state of emergency on April 7, Maya was furloughed by her employer.

Maya, a fourth-year university student from Nepal who did not want to give her real name, had been counting on her part-time restaurant job to fund her studies. Her employer had initially said the restaurant would resume operations on May 7, a day after the government was meant to lift the state of emergency. But Abe has now extended that to May 31 and Maya has been told that she will be working fewer hours than before when she returns.

The business major studying in Fukuoka Prefecture had hoped to remain in Japan after graduating to get a job at an airport or a hotel. Now, the coronavirus pandemic has thrown her plans into disarray.

"If I cannot work in May, I can't make a living," she said. She has had to ask her university to allow her to pay her tuition fees in installments. "I will probably ask them to extend the deadline again if I cannot resume working."

Japan had been opening up to foreign students as it sought to expand its skilled workforce in the face of an aging society. According to the Japan Student Services Organization, the number of foreign students in Japan reached more than 310,000 in 2019, up from 164,000 in 2011, and exceeding a government goal of attracting 300,000 by 2020.

This rapid growth was achieved mostly by the increase of self-supported students from Asian countries, especially from relatively poor ones, said Yuriko Sato, associate professor at the Tokyo Institute of Technology.

Indeed, the numbers prove her point. JASSO said Chinese students accounted for 63% of the total in 2010, followed by South Koreans at 14%, Taiwanese at 4% and Malaysians at just 2%. But by 2019, the percentage of Chinese had dropped to 41%, while Vietnamese and Nepalese had increased significantly, at 20% and 7%, respectively. 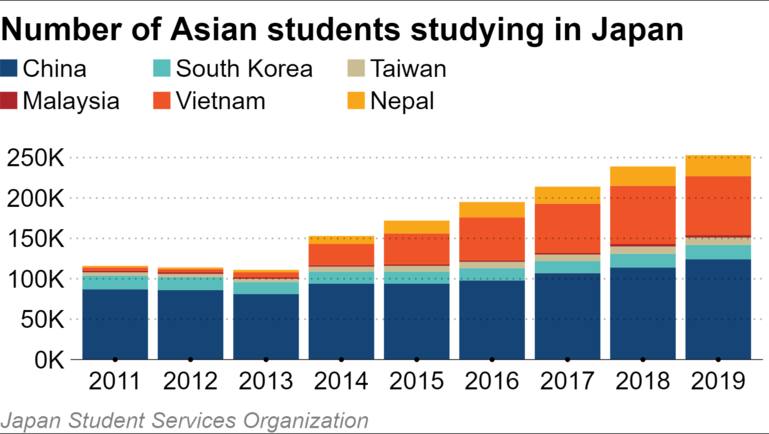 Now that government policy is being tested as coronavirus changes the retail and entertainment industries, robbing many international students of part-time jobs that help to fund their lives in Japan.

Some study abroad agents and schools have recruited students from lower-income countries in Asia, encouraging them to study in Japan while carrying out part-time jobs, said Sato. Unlike Canada or the U.S., Japan allows foreign students to work up to 28 hours per week. This is longer than they are permitted to work in Australia and the U.K.

In fact, some Japanese language schools are taking foreign students "on the premise that they will do part-time jobs" to make a living and pay their tuition fees, said Takahide Ezoe, principal of the Shinjuku Japanese Language Institute.

According to a survey conducted by JASSO, 76% of foreign students have part-time jobs. The restaurant business, which for some time has suffered from chronic labor shortage, is the biggest beneficiary of this pool of workers, absorbing 42% of the total.

In Maya's case, she earned roughly 100,000 yen ($937) every month and used nearly half of it on rent, mobile phone bills and food, saving the rest for tuition fees which she paid every six months. Since she arrived in Japan four years ago to learn the country's high levels of hospitality, this has worked well, says Maya. "I've never delayed paying tuition fees until now," she said.

She isn't the only one struggling. "Those who come to me asking for help are barely making ends meet even at normal times," said Kenji Umeki, president of You Make It, an organization that supports foreign students.

Since March, he has been receiving at least three calls a day from those needing help. "Being unable to work due to the virus, many students have very urgent cash flow problems," said Umeki.

Umeki pointed out that some students are also unable to rely on remittances from their families back home amid the pandemic.

"Due to the lockdown, my parents are out of work and banks are closed in my country," said Maya. "I am also worried [that I will not make enough] money to buy a flight ticket to go back home when I cannot continue to live in Japan."

Working students have been essential for some understaffed industries and have contributed to the Japanese economy. However, government support is limited under the coronavirus crisis.

"We are not aware of any supporting measures for international students for now," said a representative at JASSO, which offers scholarships and loans to students. "As many Japanese students are struggling right now due to the virus, scholarship support might be prioritized to them," he added.

Some universities have independently launched programs to help struggling students. Kyoto Sangyo University gave 50,000 yen to each of its 14,000 students while Tokyo's Waseda University offered 100,000 yen.

Foreign students can benefit from the recent government decision to hand out 100,000 yen to all residents, but Umeki said they needed stable employment support.

The government in April 2019 opened 14 sectors, including restaurants and nursing, to skilled foreign workers. The government had initially predicted that up to 47,550 people would obtain the new residential status by the end of March, but the number stood at just 2,994 as of February.

Sato from the Tokyo Institute of Technology is calling for more public support for foreign students so as to retain talent. "Gaining foreign talent is key for business amid the shrinking domestic market, and foreign students will continue to be the source of highly skilled human resources for Japan," said Sato. 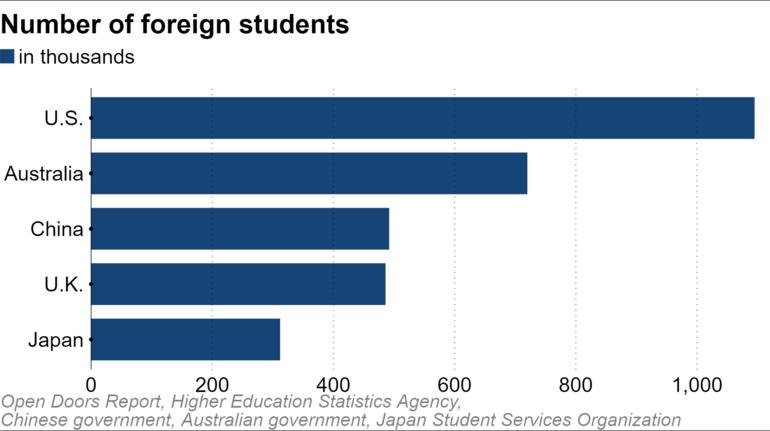 She added that Japan had to keep an eye on its regional rival. "China is rapidly emerging as a major destination for foreign students."

With its Belt and Road infrastructure initiative, China is accepting about 490,000 foreign students every year, rapidly catching up with other popular destinations like the U.K. "While China is granting abundant scholarships, the question is: 'how can Japan bring more students into the country?'" Sato added.

According to Sato, China's emergence as a destination for foreign students reflects its growing status as an economic power. "Foreign students studying in China think that learning Chinese and establishing connections with the country will be helpful for their careers," said Sato.

On the other hand, Japan's economic power has been declining over the past 30 years and this "deteriorated the attraction of studying in Japan," she added.

Japanese universities are also not rated as highly as those in the West. According to the World University Rankings 2020 conducted by Times Higher Education based in the U.K., there are only two universities in Japan in the top 100, despite the Tokyo government setting a goal of raising that number to 10 by 2023.

"Japan will have to expand support and give students incentives to stay in Japan," Sato said. "The coronavirus situation is testing Japan on how seriously the country cares about its foreign students. This will ultimately determine whether Japan can attract more foreign talent."