AR on smartphones fills gap for kid's opportunity to learn YANGON -- An app developed in Myanmar that uses augmented reality to help change the way people learn in one of the poorest countries in Southeast Asia is this year’s winner of the Nikkei Asian Review Award for Excellence.

Each card provides the learning content of a course unit shown systematically with illustrations. When a card is shot with a smartphone through the 360ed app pre-installed in it, three-dimensional images of the content superimposed on physical objects are shown on the screen.

Hla Hla Win, a co-founder and chief executive of 360ed, is a 38-year-old woman who was once an English teacher in Mandalay, the second-largest city in Myanmar. She later completed a master's program at Harvard Kennedy School of Government on a scholarship.

While studying in the U.S., she joined in an education course in California at Singularity University, which supports young people aspiring to start a business, and came to think of utilizing the virtual reality and AR technologies in education. 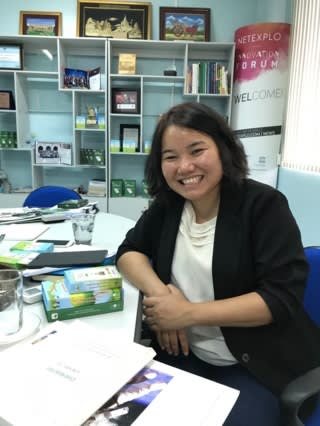 In Myanmar, education has traditionally focused on rote learning, or memorization, and most schools have lacked models and experimental installations for science education.

Hla Hla Win says she wants to change this by using mobile devices that have rapidly come into wide use over the past decade. "Mobile phones are a computer in your pocket. Why don't we utilize it for education?" she said.

In 2018, 360ed first started selling app packages for three subjects -- an elementary English, at 9,500 kyat ($6), biology and chemistry for high school students, each at 14,500 kyat. About 18 months later, the company offers nine subjects, including physics, electric circuit and chemical elements.

360ed has expanded its business to neighboring countries -- including Vietnam, the Philippines and Indonesia -- by providing licenses to produce and market app packages in those countries.

It has sold more than 200,000 packages through marketing channels, such as bookstores and schools. The company does not intend to operate only in Southeast Asia and is now thinking of expanding to Japan and Africa.

A new pioneering product the company recently started offering in Myanmar deals with sex education for teenagers. The subject is considered taboo in Myanmar, a conservative Buddhist country. The product titled"Bay Kin," meaning "free from danger" in Burmese, teaches children the workings of the human body and how to protect themselves.

Apart from the AR apps, 360ed has developed a STEAM Education package called Marker 360. It is a work kit for assembling things with various materials including electronic parts. It is designed to help children develop their creativity.

In Myanmar, startups like 360ed that use digital technology are increasing. 360ed shows that startups can change society with their entrepreneurial spirit even in low-income countries.