TOKYO/KYOTO/NIIGATA, Japan -- When Niigata University launched a sakeology course last year, some 800 students signed up, four times the initial quota. The first class was so popular that many students had to take notes while standing up.

Now in its second year, the sake course has attracted a similar number of students. It is designed to help students acquire a comprehensive knowledge of sake making, including legal, commercial and agricultural aspects.

Niigata, in northwestern Japan, is a major producer of sake, but the domestic market for the liquor has been shrinking as it loses share to other tipples, especially among young consumers. The university developed the course with the prefectural government and the Niigata Sake Brewers Association to stoke students' interest in traditional brew.

"Sakeology has drawn attention of young students as it helps bring their academic expertise into the study of sake," said Yasuyuki Kishi, an associate professor at the university.

Niigata University is not alone in offering courses designed to stimulate interest in local industries and communities, and equip students with the knowledge and skills to help revitalize the livelihoods and neighborhoods alike.

In Mie Prefecture, the putative birthplace of ninja, a university has established a research center to unlock the mysteries of the stealth warriors in the Iga region. 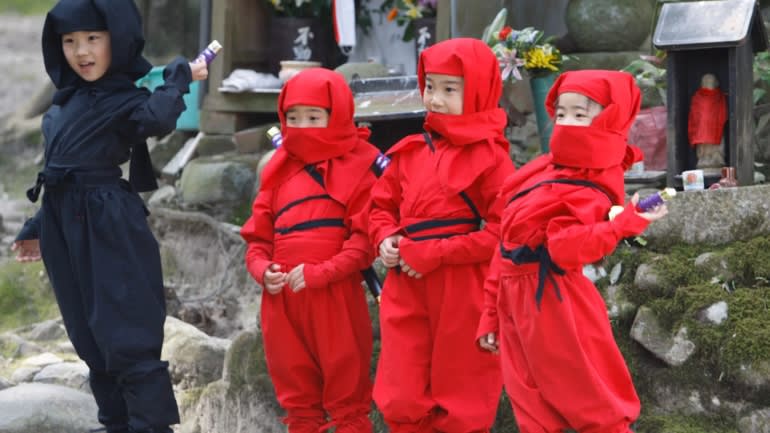 Children dressed as ninjas pose for a photo during a festival in Iga, about 400 km west of Tokyo.   © Reuters

In Kyoto, Doshisha University is offering a multidisciplinary course that teaches all aspects of the ancient capital.

Not satisfied with just teaching sakeology, Niigata University has begun developing its own brew. It has teamed up with the Niigata Prefectural Sake Research Institute and other organizations to produce a new type of sake using yeast extract from wisteria. The project uses flowers cultivated at the Northern Culture Museum, a popular tourist destination famous for its wisteria. The sake is expected to go on sale at the museum in spring.

"Members of liberal arts faculties can contribute greatly to the development of unique sake," said Kazushi Suzuki, a professor with Niigata University's Faculty of Agriculture.

In Hyogo Prefecture, known for the popular Nada's Sake brand, a university has launched an introductory sakeology class with the Nadagogo Brewers Association.

The class is part of the university's "Kobe studies" course, which consists of 11 classes to teach various subjects related to the region and its culture, such as the massive earthquake that struck in 1995 and the marine environment of the Seto Inland Sea.

Nearly half of the students at Kobe University are from the surrounding Kinki region. "I hope the program will make more students opt to stay in the region," said professor Kiyoshi Maiya.

Doshisha University's course on Kyoto teaches everything about the age-old city, including its geography, history, culture and industry. The university invites about 30 outside experts to give lectures.

It launched the course last year as part of an academic exchange program with the Agency for Cultural Affairs, which plans to relocate to Kyoto.

The course is aimed at helping students deepen their understanding of Japanese aesthetics and culture.

In one lecture, students study the art of flower arranging through hands-on experience. In another, they visit old machiya -- traditional town houses where merchants and craft workers used to live -- and come up with suggestions on how to creatively use the buildings to spruce up neighborhoods.