Peking University is one of China's most prestigious schools. Chinese families spend more than 20% of their income on educating their children, according to a survey.   © Reuters
SHIN WATANABE, Nikkei staff writerNovember 16, 2019 05:38 JST | China
CopyCopied

DALIAN, China -- China has surpassed the U.S. as both the top investor and breeding ground for unicorns in educational technology, propelled by anxious Chinese parents looking to give their children a leg up in the country's cutthroat academic race.

The country is now responsible for over 60% of the world's investment in the field, which draws on artificial intelligence and other tools to provide a tailored educational experience. Increased access to high-quality instruction is expected to reshape the country's educational environment.

The cutting-edge technology brings one-on-one learning inside students' homes. "What color is the rabbit?" a teacher said to a Chinese student in English from a computer screen. While the scene appears just like a standard online tutoring session, VIPKid, China's leading ed tech unicorn, uses its technology to provide an optimal experience for students and teachers alike.

VIPKid matches Chinese students to an English teacher that meets their specific needs out of their stable of more than 90,000 tutors across the U.S. and Canada. In addition, the program analyzes students' expressions in real time. If they start to get bored or distracted, teachers can change the lesson plan and use visual aids to regain their interest.

At an average of $24 for 25 minutes, VIPKid's classes are not cheap. But the company now boasts roughly 700,000 students and a valuation of $3.5 billion. It employs 1,000 engineers, who make up a seventh of the total workforce. 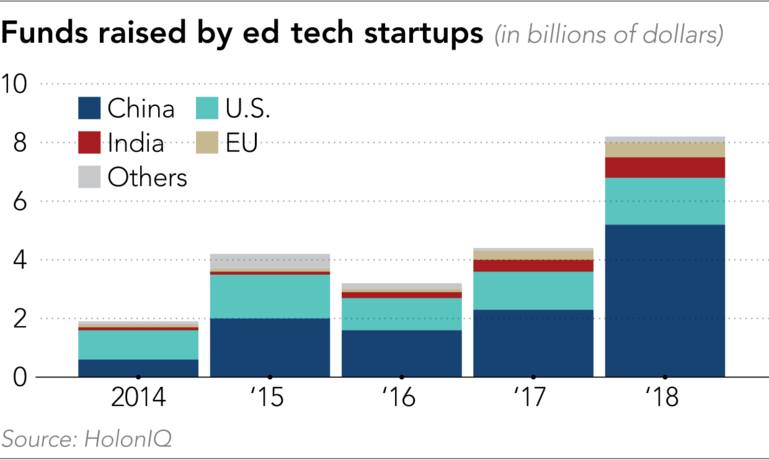 Another Chinese unicorn, Zuoyebang, provides homework help. Students can send a photo of a difficult problem through a smartphone app, which then uses AI to search similar problems and provide an answer with an explanation. The system has roughly 180 million problems on file.

Zuoyebang's valuation stands at $2 billion, with over 120 million users. A monthly membership starts at 20 yuan ($2.85).

Global investment in ed tech startups surged 86% in 2018 to $8.2 billion, according to international education researcher HolonIQ. China accounted for $5.2 billion of the global tally, far outpacing the U.S. share of $1.6 billion, India's $700 million, and the European Union's $500 million.

Eight of the world's 12 ed tech unicorns are Chinese, while the U.S. had three and India one. More than 10 Chinese ed tech companies went public in 2018. A teacher, right, provides instruction over the internet at Zuoyebang.

One factor behind their rise is backing from Chinese tech titans. VIPKid has received investment from Tencent Holdings and Alibaba Group Holding, and Zuoyebang from Baidu. These megaplatforms not only provide cash but help with technological aspects as well.

Another factor is the heavy emphasis Chinese society places on education. Chinese families spend more than 20% of their income on educating their children, according to one 2017 survey. Users for China's ed tech services are expected to increase 95% from 2018 to 2022 to about 260 million, Shanghai-based iResearch Consulting Group predicts.

Because anyone with an internet connection can access these services, they could help narrow the gaping educational gap between China's coastal megacities and far-flung farming villages. "This revolution in the private sector will eventually spread to public schools in farming villages," said Daisuke Inada, founder and CEO of Japanese ed tech startup Atama Plus.