SEOUL -- The decision by the U.S. government on Tuesday to drop a plan to deport international students whose courses move fully online because of the coronavirus pandemic will be a relief to American universities that rely on Asian students as a lucrative source of income.

But with countries such as the U.S. and the U.K. registering tens of thousands of COVID-19 deaths, schools have their work cut out to show they can still offer high quality education in a safe and welcoming environment.

Educational institutions in both countries have seen rapid revenue growth in recent years due to an increase in Asian students.

Universities such as Harvard and the Massachusetts Institute of Technology filed lawsuits over a July 6 directive by immigration authorities that students in American universities moving to online only lectures may have to leave the country.

"There is widespread concern regarding the fate of international students in the United States as a whole," Steven Boyd, a New York-based recognized expert in the field of Strategic International Student Recruitment, told the Nikkei Asian Review.

"The U.S. is for many the primary destination of choice, but international students may interpret these guidelines as an indication that international students are not welcome in the U.S.," Boyd said. "There is a general sentiment among university administrators that this unnecessarily sends the wrong message during an already complicated time."

But in a sudden change of course amid a court challenge by universities, the U.S. government said Tuesday it was dropping the plan. Reuters reported, however, quoted a senior U.S. Department of Homeland Security official as saying that the Trump administration still planned in coming weeks to issue a regulation covering whether students from overseas can remain in the U.S. if their classes go online. 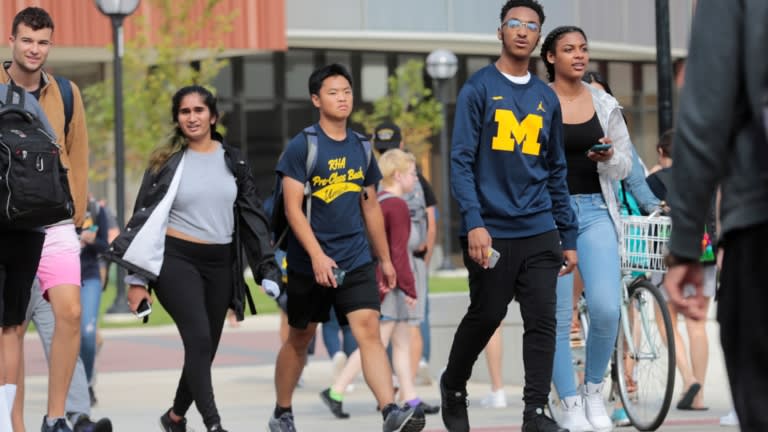 Students walk on campus at the University of Michigan in Ann Arbor, Michigan, in September  2018.    © Reuters

The situation for universities was already tough due to COVID-19 preventing short-term travel, but the death tolls of more than 135,000 in the U.S. and 45,000 in the U.K. have worried potential students.

John MacIntyre, pro vice chancellor of Sunderland University in northeast England, told Nikkei that demand remains stable from South Asia but students further east -- especially those from countries that moved quickly to contain the virus -- are likely to be less forgiving.

"Students coming from that part of the world are used to wearing face masks and they have a sense of having dealt with this kind of thing in the past. They know what you need to do to overcome a thing like this," MacIntyre said. "They are nervous about coming to the U.K."

It's a similar story in the U.S.

"With the large number COVID-19 cases reported in the news media and concern about how the health crisis is being addressed in general in the U.S., university representatives' key task is to explain the measures their institutions are taking to minimize the effects of the infection and to protect the well-being of students living on and off campus," Boyd said.

If this is not done, he added, East Asian students could either stay home or go elsewhere, dealing a blow to the financial health of universities.

Asian money has provided education institutions with a much-needed infusion of funds in recent years. With tuition fees, accommodation costs as well as general spending, these students contribute substantial sums to universities and local economies. In February, the Times Higher Education magazine estimated that Chinese students alone contribute around $2.14 billion to universities in the U.K.

The fallout for the next academic year, starting in September, could be costly. The number of Chinese applicants for a U.K. student visa dropped 72% in the first quarter of 2020, according to Forbes.

"Some universities are heavily dependent on international students," MacIntyre said. "We feel we can cope with the change as long as nothing else comes through, either a second wave or an outbreak overseas. That will be a major determining factor."

A second wave would also be a major problem in the United States.

Boyd said that U.S. universities are expecting a significant drop in international enrollment for the autumn of 2020 and spring of 2021.

"At large universities, this overall drop in international enrollment could represent a loss in the tens of millions of dollars of tuition revenue," he said. "At smaller institutions, the loss of revenue may be less in total dollars, but may be proportionately more devastating."

Yet Boyd believes universities could have been better prepared after seeing the impact on international admissions during the global financial crisis of 2008. "Universities began to recognize the negative effect of having too many recruitment eggs in one or two baskets," he said.

"University officials did not properly take into consideration that the international student market behaves differently than its domestic counterpart, and that unexpected economic, political and, in the present crisis, health issues can suddenly, dramatically and adversely affect enrollment and revenue."

If students feel unsafe and unwelcome, more could study in Asia.

"Standards in Asia have improved considerably and there is real quality in countries like China," said MacIntyre, though he still believes that despite the short and medium-term issues, Asian students will return in the coming years.

"I suspect that once this is over, the demand for international education will still be there. The pandemic has shown that we live in an international ecosystem; the opportunity for young people to study overseas, bring education and life experience will not go away."