TOKYO -- The library at KINDAI University was filled with zombies. But rather than aimlessly shambling in search of human brains, they were taking selfies and getting ready for job interviews.

It was all part of a late-August open campus event, in which prospective students could tour the grounds and get a feel for the institution. KINDAI is one of several universities in Japan's western Kansai region that have adopted unorthodox methods to spur enrollment.

As the country's population ages and shrinks, competition for new students among universities has intensified. With fewer students graduating high school each year, academic institutions need to find ways to distinguish themselves.

KINDAI has gone all-in on the zombie theme. In July, the school near the city of Osaka drew crowds with an elaborate game called "Zombie-Infested Science Panic," in which students played the part of the undead. Nearly 1,200 people took part in the game, which tasks players with solving problems by observing the zombies.

The goal is to encourage would-be students to look for answers while escaping conventional academic thinking. The university also wants to show how it has changed, according to the school's head of public relations.

In April, Takeshi Okamoto, author of "Zombie Studies," became an associate professor there. The zombie-filled library, which KINDAI calls the "Academic Theater," opened last year and holds over 22,000 comic books.

"KINDAI is not bound by existing limits, and its lectures and facilities are unique," the PR chief said, adding that faculty members like Okamoto, who studies modern society through the lens of zombies, are part of its uniqueness. "We want to showcase this through the problem-solving game." 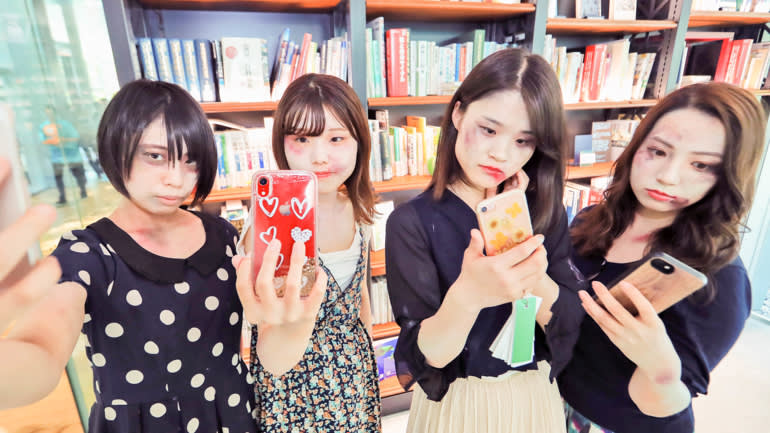 According to Okamoto, who helped develop the game, the zombies are more like humans who have stopped thinking, rather than the living dead. There are zombies, for example, obsessed with taking selfies, a metaphor for today's young people who are addicted to the net and want to be popular, he said.

Participants spend about 60 minutes walking around and collecting hints hidden in the behavior of the zombies.

"It was more like a theme park," said a female high school senior from the city of Okayama. "The problem-solving game was challenging."

Akio Yamazaki, 17, said he came with his family. "My younger brother was actually more into it than I was," he said. Koyasan University in Wakayama Prefecture is trying what it calls "secret campus" events, in which it invites visitors without telling them what they will be in for.

An event in July featured a meditation session in which 43 participants were encouraged to "empty their self." They also had an opportunity to try on traditional Buddhist monks' clothes and have a monk's vegetarian meal.

Koyasan is widely seen as an institution for training monks and has suffered from falling enrollment. Looking to reverse its fortunes, the school has held events in which participants were allowed to stay overnight at a temple. However, they often ended up being more like tourist events, drawing more working adults than would-be students.

The only Japanese university that has a course on esoteric Buddhism said the secret campus concept attracts high school students by using its image as a mysterious university to its advantage. 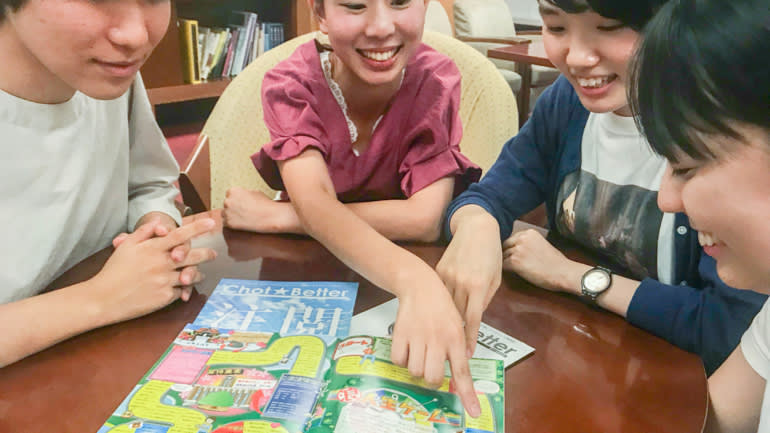 Students at Kyoto University play the Roninsei Game, which emulates the life of those waiting for a second shot at the entrance exam.

At Kyoto University, a board game resembling The Game of Life proved popular with visitors during its open campus event.

The Roninsei Game simulates the experience of high school students who failed to enter Kyoto University on their first try. They must spend another year preparing for the annual entrance exam, starting with an average academic score. It is a path taken by many Japanese students who want to enter specific universities. The game's title is borrowed from the term for such youths, roninsei -- itself a pun on the word ronin, which describes wandering masterless samurai in the feudal period.

Players move ahead on a course to try to earn higher test scores. The first space says: "You dye your hair blond and start your roninsei life. You distract others in a placement test. Your score drops by 5." Like this one, the text in the spaces includes actual experiences Kyoto University students had before they passed the entrance exam.

A Kyoto University senior and member of the team that created the game said there are many students at Kyoto University who experienced life as a roninsei before entering the prestigious institution.

"For some people, some of the game's descriptions may be depressing reminders of their actual experiences, but my hope is they enjoy the game all the same," she said. The game may also help high school students get a glimpse of what it is like to be a Kyoto University student, she added.