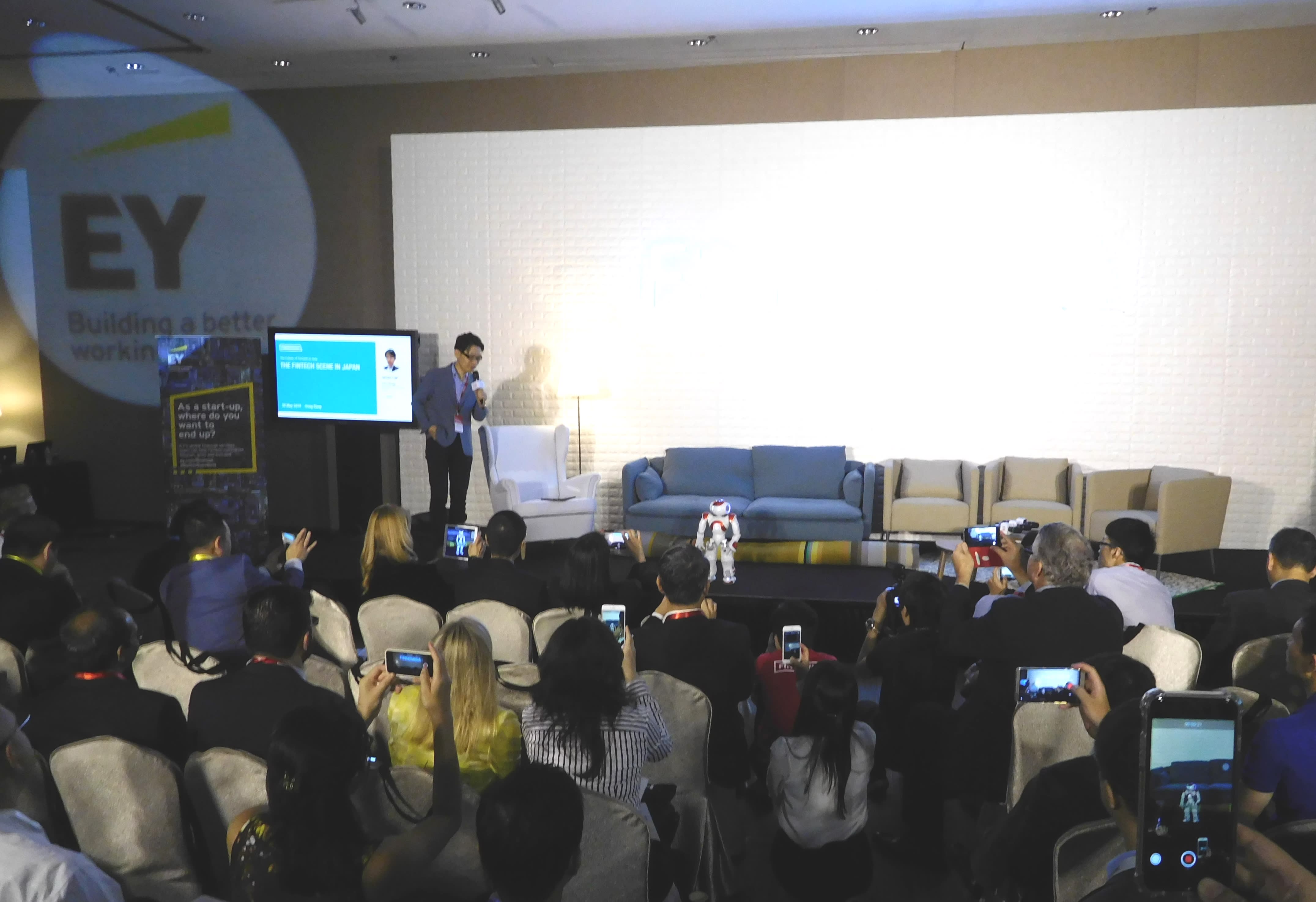 HONG KONG -- A wave of financial technology is surging to Asia, with the establishment of venture businesses to fuse information technology and financial services in China, Hong Kong, Singapore and other Asian economies, and spreading even to Myanmar.

An international exchange event on fintech called Finnovasia was held in Hong Kong on May 30. The conference, whose name is a combination of words "finance," "innovation" and "Asia," was aimed at providing fintech-related entrepreneurs, investors, banks and regulators a venue to exchange opinions on how the financial industry should develop in Asia and create opportunities for cooperation.

A conference-goer sitting next to me said he was from Myanmar. We exchanged business cards, and I learned he was Tim Scheffmann, CEO of MyPay, a mobile wallet service provider in Myanmar.

The German used to work in the financial industry in Singapore but joined the management team of MyPay, seeing new business opportunities in Myanmar, where financial infrastructure has yet to develop.

In Myanmar, people who are registered for social networking services via smartphone outnumber those having bank accounts. MyPay provides such services as payments for shopping and remittances via smartphone. As the company hopes to launch overseas remittances involving Thailand, Singapore and other countries, it is seeking to raise $5 million. 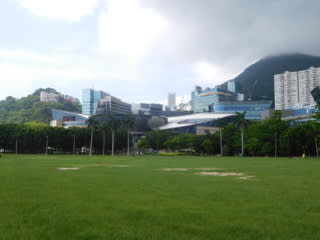 Some 60 fintech-related venture businesses have offices in Cyberport, an incubation facility for startups in Hong Kong. (Photo by Masashi Uehara)

Scheffmann participated in the Finnovasia event to find investors. MyPay will welcome investment from Japan, he said.

Finnovasia held its first meeting last December. The latest event was attended by more than 500 people, up from more than 300 at the first conference.

While representatives of Hong Kong-based fintech ventures such as mobile phone-based lender WeLab appeared on stage, more than 50 speakers were from 18 countries. Among them were a Chinese representing Dianrong.com, a Chinese internet brokering service company for person-to-person loans called the Lending Club of China; Vitalik Buterin, the Russian developer of Ethereum, a platform expected to execute contracts using a next-generation cryptocurrency; and Tatsuto Fujii, senior analyst at Mitsubishi UFJ Financial Group.

The event was planned and arranged by Finnovasia CEO and co-founder Anthony Sar from Russia.

Fintech has become a buzzword, taken up by the mass media and other concerns across the world, excluding North Korea, noted James Lloyd, the Asia-Pacific fintech leader at Ernst & Young.

Fintech-related exchange events like Finnovasia were planned in Hong Kong because a system to nurture startups has been established and begun working well in the city. Finnovasia was held at a creative digital community called Cyberport, a place for fostering venture businesses, which is located about a 20 minutes' drive from the center of Hong Kong Island on the west side of the islet.

The Cyberport initiative was proposed in 1999 at the height of the IT bubble as a project to create a business park for IT ventures, like Silicon Valley, in Hong Kong. It was jointly launched by the Hong Kong government and Hong Kong-based communications and real estate company PCCW, formerly called Pacific Century Cyberworks, and was building on the momentum as a bidder for Hong Kong Telecommunications.

Cyberport was completed in 2002 at a total cost of $2 billion but continued to struggle to lure tenants, as the IT bubble had already collapsed by the time it was completion.

However, more than 120 venture businesses had moved into Cyberport by 2010 and the number has nearly tripled to 320.

Hong Kong Cyberport Management, which operates Cyberport, has fostered nearly 50 venture businesses each year and will increase the number to 100 in 2016, said Herman Lam, CEO of the company. Fintech is an area the company is emphasizing, he added.

George Harrap, co-founder and CEO of Bitspark, said the overseas remittance service company was established in Hong Kong largely because Cyberport was there. The free use of an office for three years and the provision of 330,000 Hong Kong dollars ($42,539) as seed capital were also helpful, said Harrap, who was born and raised in Australia.

Australia has high corporate tax rates and a variety of restrictions. While Bitspark uses bitcoins for its service, it did not need to be registered as a financial institution in Hong Kong because the virtual currency is treated as a commodity, rather than a currency, in the city, Harrap said.

Moves to introduce short-term, intensive "accelerator" programs to teach management know-how to startups are beginning in Hong Kong. In contrast with Finnovasia and other exchange events acting as meeting places for startups and investors, accelerators offer high-quality management instructions for further growth of selected startups. Accelerators are aimed at enabling financial institutions to find startups with new ideas and business consultants to introduce such startups to their client financial institutions.

Accenture, a leading management consulting service company, started an accelerator program under the name FinTech Innovation Lab in New York in 2010 and expanded it to London and Dublin. It launched the program in Hong Kong in 2014.

In Hong Kong, six or seven promising startups, chosen from across the world, receive free, intensive management education for three months. Bitspark was one of seven startups selected from 350 applicants for the 2015 program.

DBS Bank of Singapore is also undertaking an accelerator program in Hong Kong, assisted by Nest, a local incubator of startups. Nest began activities in 2010 to support international venture businesses' market advances into Asia through accelerators and promote tie-ups between venture businesses and major Asian companies. Having offices in London, Paris, New York, Singapore, Bangkok and Nairobi, Nest is building an international network.

In the field of fintech, Nest is supporting Oversea-Chinese Banking Corp.'s accelerator program in Singapore.

In addition to carrying out accelerators and investing in startups, Nest began a membership club, called Metta, for entrepreneurs earlier this year. It has leased space on the 21st floor of a high-rise in Lan Kwai Fong, a bustling area in Hong Kong, where members, including venture businesses, investors and financial institutions, hold talks or events.

The day before the main program of Finnovasia, the Japan FinTech Night event was held at Metta.

A Japanese fintech industry association, called the FinTech Association Japan, was established in September 2015, grouping some 50 startups and 80 big companies. Officials explained related activities in Japan, such as the opening of FINOLAB, a center for fintech companies, near Tokyo Station in February. Participants listened attentively, possibly because activities in Japan are not well known overseas.

The association is planning to hold a fintech-related event in Tokyo this autumn. The Monetary Authority of Singapore has announced a plan to host a five-day fintech festival in November.

Interest in fintech therefore is spreading from Hong Kong to the whole of Asia including Japan. Tie-ups between fintech hubs in Asia are also expected to be activated.

Masashi Uehara is a principal economist of the Japan Center for Economic Research.