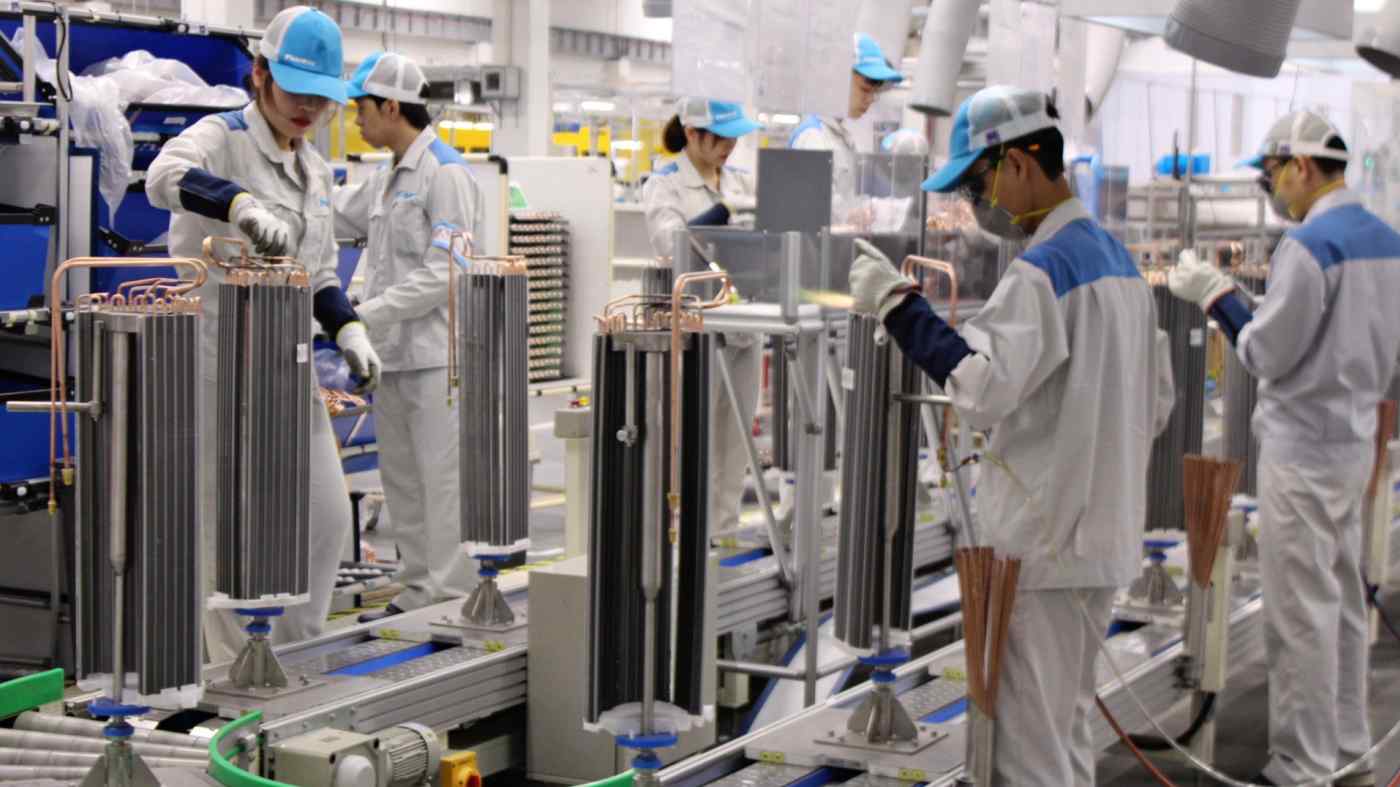 OSAKA -- The coronavirus has broken a six-year streak of record profits for Daikin Industries, one of the world's largest air conditioner makers, but the company looks to use its virus-eliminating air purifiers to turn the crisis into a springboard to recovery.

Daikin forecasts group operating profit dropping 44% to 150 billion yen ($1.39 billion) this fiscal year, after a 4% dip in fiscal 2019. This would mark its first two-year stretch of falling profits since fiscal 2009, amid the global financial crisis. The company said it will reevaluate its plans every month or two in light of the uncertainty ahead.

While President Masanori Togawa stressed in last month's earnings briefing that the priority for now is "weathering this difficult situation," he made clear that the pandemic will not stop Daikin from going on the offensive.

"We will accelerate defensive and proactive measures to exceed our forecasts," he said.

"We don't need abstract discussions," he told executives. "I want you to implement concrete measures with a sense of urgency."

Daikin's "proactive" measures include a focus on air purifiers that use proprietary technology to remove bacteria and viruses, as Togawa sees rising global demand for better air quality and circulation. More inquiries about such products are coming in from Singapore and other markets as the coronavirus spreads.

Daikin is stepping up outsourced production of these purifiers in China and aims to sell 550,000 units in fiscal 2020, over 30% more than the previous year. It is also considering manufacturing them at its plant in Malaysia to get a leg up on rivals.

As for its mainstay air conditioners, the company will ramp up e-commerce marketing in China and focus on high-performance units considered to have antibacterial effects.

Investors approve of the direction Daikin is taking. The company's shares gained 16% since the earnings briefing through Tuesday, outperforming the Nikkei Stock Average's 10% rise and nearing the stock's year-to-date high from early February.

Daikin "has drawn up projects for growth and is implementing them," said Taku Ouchi of SMBC Nikko Securities. "This suggests its competitiveness will increase further in the post-coronavirus world."

Daikin has built a track record of growing earnings after crises. In fiscal 1993, the company recorded its first red ink in 17 years due to the collapse of the Japanese economic bubble, as well as a maturing domestic market.

Daikin turned things around by improving the productivity of domestic plants. The company also put out the world's first humidity-regulating room air conditioner that needed no water supply.

For the just-ended fiscal year, sales are 2.5 times the turnover in fiscal 2009, thanks to a series of acquisitions. The operating profit sextupled during that span.

"The current executive team have overcome the past crisis," said Kentaro Maekawa at Nomura Securities.

The earnings mix has changed sharply from the global economic crisis. For example, sales from the Asian air conditioning business has grown to about 295 billion yen in fiscal 2019, up 260% from a decade earlier.

The impact from the crisis was minimal in India and other emerging Asian countries. With ample margin for development in these markets, Daikin boosted production capacity, which led to growth.

Overseas markets accounted for 79% of sales in the air conditioning segment last fiscal year, up 15 points over the decade. The dynamic helped lift consolidated earnings.

Unlike the global economic crisis, where the effect was mostly limited to developed countries, no nation is immune to the fallout of the coronavirus pandemic. The global economy is set for a lengthy downturn, and Daikin will once again be pressed to identify areas promising growth.

Another cause for concern is Flanders Holding, the U.S. air filter manufacturer acquired in 2016. Although Flanders is a core business, poor production efficiency and delayed deliveries have caused perennial losses. Flanders was responsible for 23.5 billion yen in goodwill and other impairments for fiscal 2019, which appears to be unprecedented in Daikin's history.

The parent company is busy automating Flanders filter production but "since [Daikin] is an equipment maker, the lack of knowledge of filter material is making recovery difficult," said a Daikin executive.

Not only is Daikin staring at the coronavirus crisis, which Chairman Noriyuki Inoue describes as "incalculable from past experience," the group also has to deal with a money-losing U.S. subsidiary. Daikin's strength in balancing risk-taking and self-preservation will face its ultimate test.