Investors have been impressed with Daikin's performance during the pandemic, sending its market cap to a record high in mid-January.
TATSURO MIYAZUMI, Nikkei staff writerJune 12, 2021 14:00 JST | Japan
CopyCopied

The company reported its first sales and profit declines in 11 years in the year ended March, but results were much better than initial forecasts and it expects a 13% jump in operating profit this year. Analysts attribute the company's strength to its ability to recognize its own weaknesses and quickly rectify them.

Daikin's group operating profit fell 10% on year to 238.6 billion yen ($2.17 billion) in fiscal 2020, mostly due to weak demand for air conditioning used in hotels, restaurants and other commercial establishments caused by a sluggish economy. "For Daikin, which operates globally, the impact of the pandemic was very serious," said President and CEO Masanori Togawa at an earnings briefing in mid-May.

Daikin had initially forecast a 40% decline in operating profit. This prompted Togawa to revise plans, halting the decline at only 10%. It has raised profit and sales forecasts four times since announcing the dire projection. Demand for Daikin's commercial air-conditioning plunged amid the pandemic, but residential units sold well in Japan. Sales also remained firm in Europe and China, offsetting weak demand in the U.S. and the rest of Asia.

In Japan, where Daikin posted a record profit, its main residential model Urusara X became popular among consumers eager to avoid COVID-19 infections, as the product can cool, warm, humidify or dehumidify while ventilating.

Previously, the company paid little attention to the ventilation feature of air conditioners but saw a winner in a model that could simultaneously ventilate while performing other functions -- a big plus during the pandemic. Aggressively marketing this feature on an existing model helped Daikin avoid sharp discounts.

The technology used in Urusara X was developed in the 1990s, when the company was on the brink of pulling out of its money-losing home air conditioner business. Despite frequent calls by analysts and others to pull the plug, then-President and current Chairman Noriyuki Inoue stood firm. "People show their true mettle when driven to the wall," he told staff. Daikin's Ururu Sarara series -- the industry's first waterless humidifying room air conditioner -- debuted in 1999.

This is not the only time Daikin turned adversity into opportunity. During the 2008-2009 global financial crisis, demand for the company's products "evaporated" but Daikin used the disaster to overhaul its business. What it found was potential demand for energy-efficient heat pumps in Europe, where combustion-type heating was the norm. Heat pumps use heat from the ambient air as their primary energy source and thus do not emit as much carbon dioxide as other heating units.

The financial crisis also made Daikin aware of the potential of the Chinese market.

Daikin was one of the last Japanese air conditioner makers to enter China, but its sales have been solid as the company focuses on upscale consumers and has partnered with Gree Electric Appliances of Zhuhai, a local manufacturer.

In fiscal 2020, Daikin's air conditioner sales in China rose 7% on year to around 327.7 billion yen -- nearly double the level during the global financial crisis. With China now a key market, Daikin has achieved a balance among the U.S., Europe, China, Japan and the rest of Asia-Oceania, each contributing 15% to 25% to overall sales. 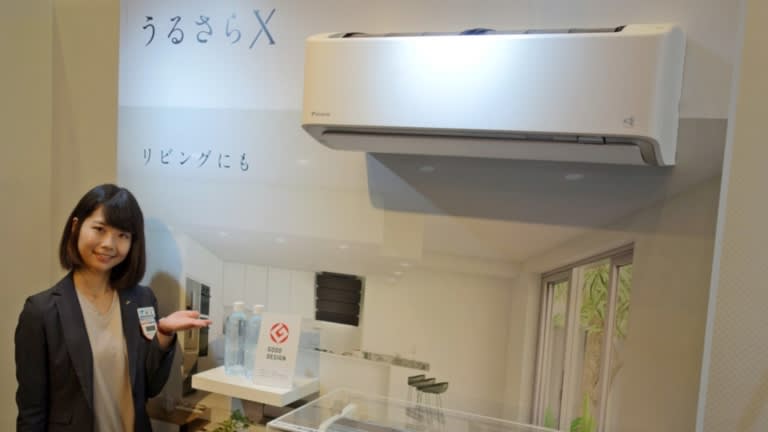 Still, the pandemic has not been easy on Daikin.

Once emergency measures like lockdowns were imposed, the company was unable to monitor its supply chain, as it lacked a system to integrate procurement and production data in different regions and product categories. "We couldn't see what was happening in our second- and third-tier suppliers," a company representative said.

That drove Togawa to spearhead a project to consolidate information systems that allow constant monitoring of supply chains to avoid excess inventory.

Daikin expects operating profit to rise 13% to 270 billion yen in fiscal 2021, returning to pre-COVID levels. It took the company four years to recover from the Lehman shock but Togawa aims for a much quicker recovery this time around. "We'll go back to our pre-pandemic levels in one year, rather than the two we projected last fall," he said.

But challenges abound. While U.S. housing starts are robust, COVID-19 is still a serious threat in India and other hot spots. The price of copper, used in heat exchangers and other components, is at a 10-year high due to an influx of investment money. With materials prices rising, Fujitsu General and other rivals have held fast to their cautious outlook.

Daikin, which celebrates its centennial in 2024, hopes to top its record profit of 276.2 billion yen set in fiscal 2018 by then. With COVID-19 still gripping many parts of the world, this year will be key to achieving that goal.