OSAKA/TOKYO -- India is establishing itself as a global center for air conditioner production, thanks largely to government incentives that have spurred expansion by companies including Daikin Industries, a top player in the South Asian country.

New Delhi wants Daikin and its rivals to not only meet India's needs, but also use the country as an export base. India's diverse climate makes it an ideal test bed for technologies to meet the needs of emerging Asian and African economies set to drive demand for air conditioning in the coming years.

"We plan to start up our new plant by 2023 and increase our local procurement to almost 100%," said Yoshihiro Mineno, a senior executive officer at the Japanese company and head of its global operations division.

Daikin is investing around 15 billion yen ($136 million) for the plant in Andhra Pradesh, its third in India, which will roughly double annual production capacity to nearly 3 million air conditioners. The factory will turn out not only finished units, but also compressors, a core component, for use there and at Daikin's other Indian plants.

The manufacturer will expand test facilities at its research and development center in Rajasthan to accelerate the development of products designed to local specifications. The company also is setting up an office in Hyderabad to recruit experts in digital technology.

Local competitors are on the move as well. Voltas, a Tata Group company that is particularly strong in budget air conditioners, is considering building another plant in southern India. Compatriot Blue Star announced a 2.5 billion rupee ($33.6 million) expansion plan in March, while PG Electroplast looks to begin production within the year at a new facility in Maharashtra that cost more than 700 million rupees.

These moves come amid a government push to foster the country's air conditioning industry, with the goal of expanding production eightfold between 2019 and 2029 to 40 million units.

India in April approved a roughly $850 million subsidy program for home appliances including air conditioners, to boost domestic output and exports as well as promote component production. Eligible companies can receive incentives worth 4% to 6% of their sales growth for five years.

India also has enacted trade barriers to protect domestic industry, hiking its tariff on compressors to 15% from 7.5% and imposing a ban last year on imports of finished air conditioners with refrigerants. 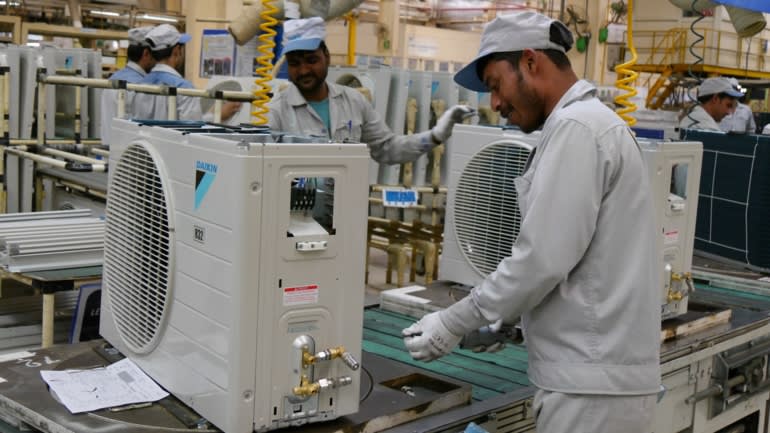 Such policies encouraged Daikin's expansion in India, including its decision to make compressors at the Andhra Pradesh plant. The company benefited from land provided at virtually no cost by the government for its Rajasthan facility.

While both New Delhi and the private sector are focused on expanding production for now, the eventual goal is to make India an export hub to markets such as the Middle East and Africa. Global demand for air conditioning is set to triple over the next 30 years, according to the International Energy Agency.

Daikin estimates the local market for air conditioners at 300 billion yen, or roughly $2.7 billion, which would make it among the largest in Asia, behind only the likes of China and Japan. Yet fewer than 10% of Indian homes have AC units, and many of those that do purchased imports.

With this in mind, the government has made sales abroad a major element of its strategy, anticipating that the incentives will boost exports by 644 billion rupees, or about $8.7 billion, over five years.

For manufacturers, making air conditioners in India has advantages. The country's massive population provides a huge potential consumer base, and its distinct climate regions can promote development of technologies and features needed to cope with different conditions.

Particularly hot areas need outdoor units that can function when temperatures are high, while energy-efficient dehumidification is a must for air conditioners in humid coastal regions. Basic heaters can be added to units meant for mountainous northern areas that get cold in the winter.

Though New Delhi's central role in the industry's growth carries the risk of a sudden policy shift, the Indian market likely will be crucial to success for AC makers.