KITAKYUSHU, Japan -- Yaskawa Electric, one of the world's top four factory automation companies, makes industrial robots and other products needed by automakers and chipmakers. To diversify its offerings, the company is now providing consultation services on automation to a wide range of industries, including food and health care.

In the fall of 2020, Hiroshi Ogasawara, the 65-year-old president of Yaskawa Electric, took advantage of a lull in the coronavirus pandemic to visit a client, an electronic parts maker in Tokyo. A manager there asked Ogasawara about supply chains, and how to improve factory lines and improve production.

Uncertainty due to U.S.-China trade frictions, the coronavirus pandemic and global competition is rising. Yaskawa's customers in the electronics and auto industries feel like they cannot continue to make "improvements" as they have in the past.

The company has increasingly found itself fielding inquiries about automation and improving production line efficiency. After launching its consultation business, the company has been dispensing advice on industrial robots based on machine tools.

Yaskawa's main products are still servomotors, which are used widely in the robotics field to control device movements. The company has shipped 20 million units to date, making it the world's top supplier with a 17% global market share. But competition with other companies is heating up. 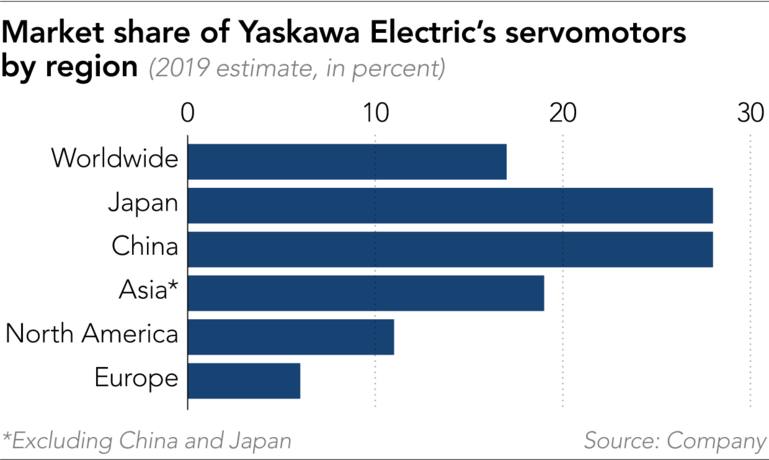 In March, the company held an online demonstration of a new type of servomotor. "As far as we're aware, this model has shown the best performance in the world," said the engineer in charge. However, two years prior, Mitsubishi Electric launched a similar product. Industry insiders think that Yaskawa's new motor is only marginally better than Mitsubishi's.

Since superior product performance is not enough in today's business environment, Yaskawa wants to turn its knowledge of factory automation and efficiency into a new business. The company is the world's only major factory automation equipment maker that sells servomotors externally, making it almost second nature to propose automation solutions that encompass the entire factory floor, including machine tools from other companies.

To make its consultation business work, however, Yaskawa needs to show that it has a stellar track record. This starts with demonstrating efficiency on its own production lines. In 2018, the company added a new facility at its factory in Saitama Prefecture near Tokyo to collect and analyze data on servomotors and industrial robots to improve production.

Machine tools from other companies that are equipped with Yaskawa servomotors are also analyzed at the facility, with robots grabbing and carrying parts processed by machine tools to ascertain whether a task can be performed in a given amount of time and if a component is reliable. Yaskawa then makes recommendations based on the analysis.

Since 2018, officials from about 300 electronics and food companies have visited the facility. "Our customers want us to raise the level of the whole production line," said plant manager Satoru Shiraishi. "This includes machine tools from other companies."

Yaskawa has recently received many inquiries from not only longtime customers in the auto and electronics industries but also from companies in food products and health care. One of these is Lotte, a major confectionery company with a factory near the Saitama facility. "We consulted with [Yaskawa] to help us evolve into a smart factory," said a Lotte production engineer.

Detecting and sorting defective products, such as unevenly baked pieces in its snacks, is crucial for Lotte. However, until recently, most of the work has been done manually. To automate this process, Lotte consulted with an IT company in the Yaskawa group about a year ago. It then introduced an artificial intelligence-based inspection system. Lotte is also considering using Yaskawa robots to identify defective products. 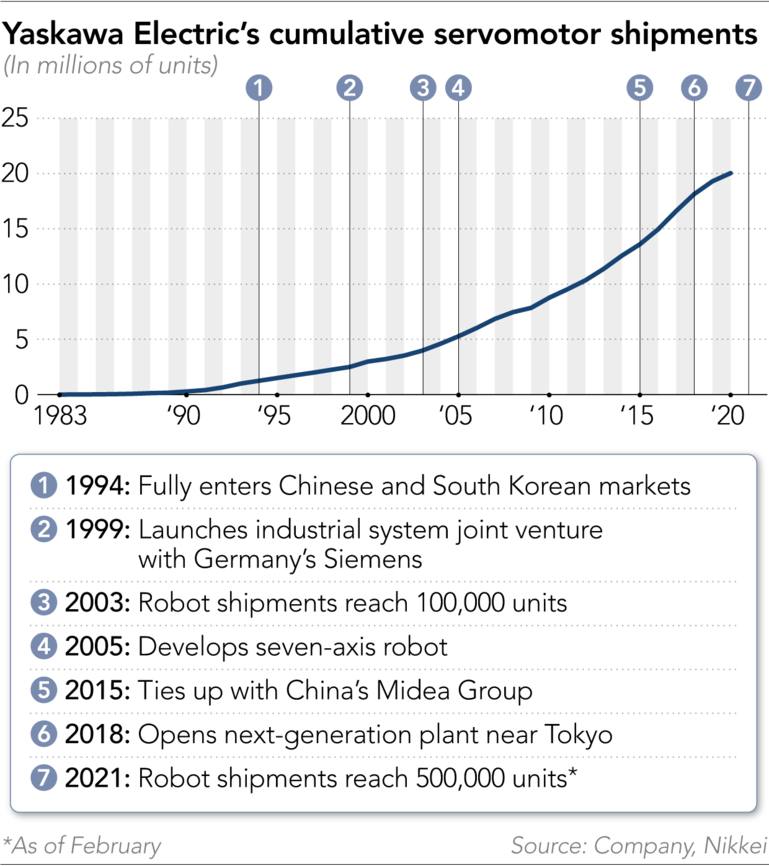 Yaskawa's robots are also used in food factories that produce rice balls and other items for convenience store chains. "We're receiving an increasing number of consultations about the automation of food factories," said Junji Tsuda, 70, chairman of Yaskawa Electric. "Everything from major corporations to small lunchbox shops."

Attracting customers in food products and other industries was a steep climb. In 2018, Yaskawa set up a subsidiary to automate vegetable factories, but the equipment it delivered to a major convenience store operator had a major defect.

"In the end, we lost hundreds of millions of yen," said Takuji Morita, 46, president of the subsidiary. When Morita reported the loss, Ogasawara just said, "It's a learning experience." He instructed Morita to replace the defective equipment with something that works to regain trust. The new equipment is still being used at the factory.

"Doing things differently than other companies and continuing to let the customers win will lead to growth in the long run," said Ogasawara.