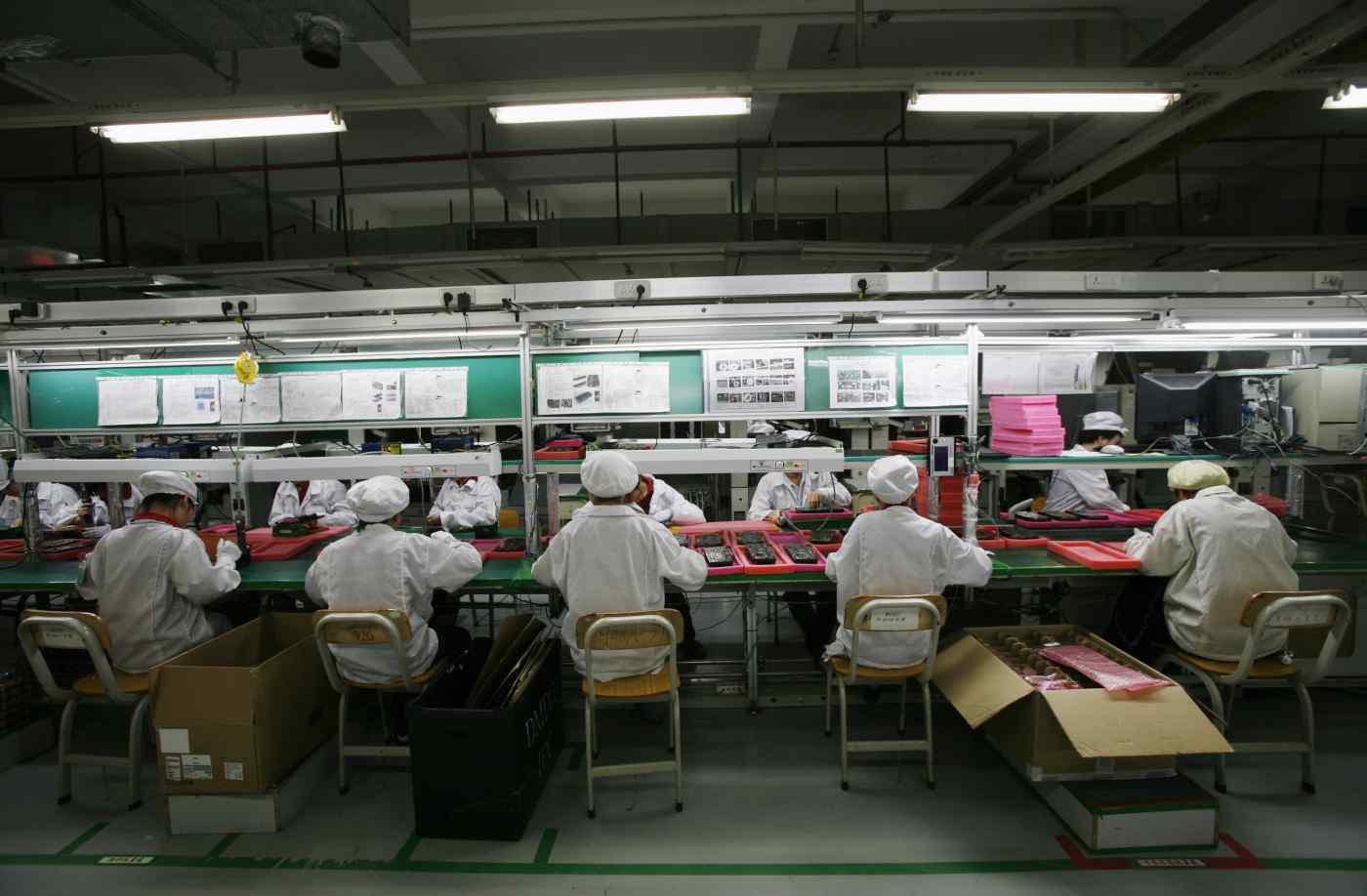 TAIPEI/ZHENGZHOU -- Piecing together iPhones may be drudgery, but it's a way to make money, say some students who work at a facility operated by Hon Hai Precision Industry in central China.

"It is not tiring at all," a 16-year old student surnamed Wang said on Tuesday. "It's just boring."

He was speaking about his work at a facility in Zhengzhou, dubbed "iPhone City," in the central Chinese province of Henan. The plant is operated by Hon Hai, better known as Foxconn Technology Group.

The intern also said he was happy to be earning some money.

Wang is a second-year student studying automobile maintenance at a vocational school. He hails from Jiaozuo, a city close to Zhengzhou, where Foxconn's main iPhone assembly facility is based. At its full capacity, Zhengzhou can churn out about 600,000 iPhones per day, a figure calculated based on some analysts' estimates of past iPhone shipments and their assumption that Foxconn assembles about 70% of the smartphones.

Foxconn is the sole assembler of the iPhone X, the premium handset that Apple put on sale earlier this month.

Wang said some 1,000 students around his age have been sent to Foxconn's Zhengzhou factory since October.

Before he graduates, Wang has to complete a four-month internship with a high attendance rate. To further ensure that students do not skip work, teachers from Wang's school are also sent to the Foxconn factory.

"The teachers don't work," he said. "They just come here to monitor our work performance."

Wang said his sole daily work was to plug a small acoustic part into handsets.

Another 16-year-old intern whose first name is Gaiya said students used to be allowed to work two more hours after their shift ends. That practice, however, ended Tuesday, when his manager suddenly announced that all workers under 18 must leave at 4:30 p.m., when their eight-hour shift ends.

This is a blow to students who have been taking home more money; overtime pay is 1.5 times that of regular pay.

"I guess we'll just go to a cybercafe or KTV [a karaoke bar] in the evening," Gaiya said, talking for his coworkers. "I'd prefer overtime work to earn extra money, though."

The Financial Times on Tuesday reported that six high school students said they regularly work 11-hour shifts assembling iPhone X handsets for Foxconn in Zhengzhou, a breach of Chinese regulations. They also told the FT that they have to complete a three-month stint at the facility in order to graduate.

Chinese labor law forbids student interns from working more than 40 hours per week, which means companies are not allowed to ask them to work overtime.

Meanwhile, the local law stipulates that adult workers can only be engaged in overtime work for a maximum of three hours per day and 36 per month.

In an emailed statement to the Nikkei Asian Review, Foxconn admitted that in some of its facilities students did work overtime, in breach of the company's own policy as well. A labor shortage and rising costs are creating serious problems for manufacturers in China. This photo was taken outside of Foxconn's factory in Shenzhen. (Photo by Kensaku Ihara)

"We have investigated all of these cases and confirmed that while all work was voluntary and compensated appropriately, the interns did work overtime in violation of our policy," the company said, adding it has taken action to ensure compliance and the student overtime situation will not happen again.

The company said all interns join Foxconn "voluntarily" and they have the right to leave it at any time, and that students make up a very small portion of its workforce.

The students are compensated at a level consistent with what full-time Foxconn employees make in entry-level jobs, the company said.

The hubbub highlights the growing challenges that iPhone assemblers are encountering now that China has its own labor shortage and cost-of-labor issues. Both Foxconn and Pegatron saw their third-quarter earnings take a hit due to rising labor costs.

Foxconn has lowered its age requirement for workers to 16.5 years old from 18 at three of its factories in China. Some of these teens have worked both Saturdays and Sundays, according to sources.

The Taiwanese contract manufacturer has recruited thousands of students in this age bracket from vocational schools near Zhengzhou. The institutions have agreed to make students available for iPhone production during the peak season.

Away from home and school, these interns sleep at Foxconn dorms -- with eight students to one 50-sq.-meter room.

Most are put on assembly lines that turn out the older iPhone 6s, while more experienced workers are tasked with iPhone X production, according to students.

This comes close to the average starting salary of a university graduate in China -- about 4,300 yuan per month, according to a 2017 report compiled by several recruitment websites in China.

According to the Henan government's website, Zhengzhou in October raised the minimum wage to 16 yuan per hour and to 1,720 yuan per month.

Foxconn starts new workers at 1,900 yuan per month, and the figure goes up to 2,100 yuan after employees pass their probationary period, according to the company recruitment website for the Zhengzhou facility.

According to China's labor law, a company should allow workers to take off at least one day per week. If an employee works seven days, the pay for the seventh day must be doubled. Pay triples for workers who come in on national holidays.

Foxconn's Zhengzhou facility opened around the end of 2010, which helped boost the local economy and bring up wages.

Still, the $530 to $680 that these workers take home each month pales to the average annual salary of $53,000 that the Taiwanese company will pay its American employees at its new panel facility in the U.S. state of Wisconsin.

Even though Foxconn attracted prior notoriety for its crude management style, particularly following a string of suicides on its campuses in southern China in 2010, Wang, the intern from Jiaozuo, said his parents are not worried because they know the teachers are also present on the factory floor.

Apple has also begun annually publishing and updating a list of suppliers. It has put in place a labor code stipulating workers at these contractors can work a maximum of 60 hours per week and that employees must be allowed one day off every seven days.

Wang Zhaohui, a long-time labor agent for Foxconn in Zhengzhou, said some full-time workers responsible for assembling the iPhone X in October worked on both weekend days before the handset hit stores on Nov. 3.

This is despite Article 38 of China's labor law, which states, "The employer shall guarantee that its laborers have at least one day off a week."

Foxconn Spokesman Louis Woo said in a separate emailed statement that Foxconn does not allow full time employees to exceed 39 hours of overtime work per month as required by the Chinese regulations.

However, Wang Zhaohui said the workers -- many of whom are farmers from nearby villages -- are more than happy to work for double pay.

"This," he said, "is probably the busiest year for Foxconn."

Apple did not return an emailed request for comments.