SEOUL -- LG is reorganizing its businesses to make a comeback as one of the top electronics conglomerates in South Korea, having decided to stop producing television panels and smartphones on its own soil.

LG Display CEO Jeong Ho-young announced at last month's CES electronics expo in Las Vegas that the company will end domestic production of liquid crystal display panels for TVs by the end of the year, with the capacity to be shifted to the production base in Guangzhou, China.

The news surprised LG Display followers, but the writing was already on the wall. The manufacturer posted a net loss of roughly 2.87 trillion won ($2.4 billion) last year -- not only the first red ink in eight years, but also a new record low.

Chinese rivals overwhelmed the company's profitability, with the final blow coming from the impairment losses stemming from weak deliveries of organic light-emitting diode panels for Apple.

LG's smartphone arm once captured the fourth-largest global market share, but has now fallen to ninth place. The segment suffered a roughly 1 trillion won operating loss in 2019, marking its fifth consecutive year in the red.

The production line recently wrapped up its relocation to northern Vietnam, where workers' wages are less than what is collected in South Korea.

LG Electronics runs mobile phone factories in China, India and Brazil as well. The goal is to turn a profit next year, said Kwon. 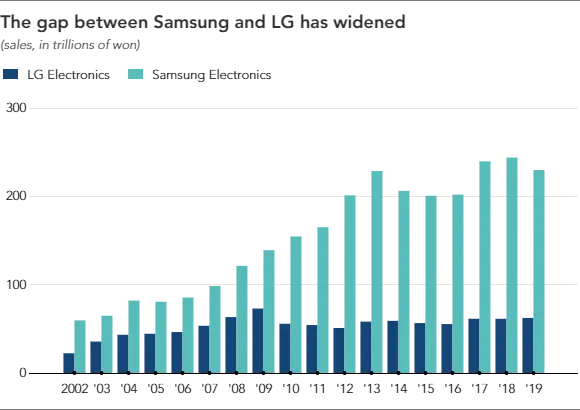 The once-proud LCD and smartphone businesses are struggling due to missteps in investments and in reading consumer demand. LG poured copious funds into making OLED panels, but customers remained attached to LCD televisions.

Purchases of OLED televisions failed to rise as anticipated. Only 3.3 million OLEDs were delivered last year, or 1.1% of the 287 million TVs delivered overall.

LG used to lead the way among smartphone manufacturers in balancing quality with affordability, but that distinction has been taken over by the likes of China's Oppo and Xiaomi.

The sudden slowdown in smartphone purchases has resulted in a vicious cycle in which LG is unable to raise development expenses.

Many say that LG's collegial corporate culture has contributed to the woes suffered by displays and smartphones. The word inhwa, or harmony, is LG's guiding principle, meaning internal competition is frowned upon.

Critics say this philosophy impedes on the development of superior talent. In contrast, compatriot Samsung Electronics focuses on developing hard-charging leaders along with revolutionary technology. 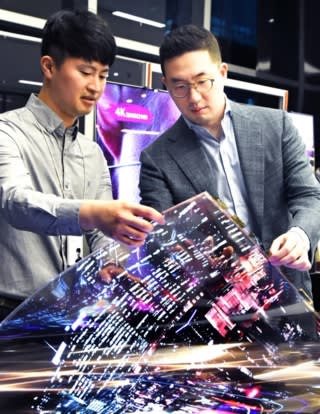 "One genius can feed millions of others," said Samsung Chairman Lee Kun-hee, who is currently incapacitated.

In an effort to lift the entire organization, the late LG Chairman Koo Bon-moo once said the group would cultivate 100 CEO candidates. One result of the focus on harmony was delays in decision-making on investment and operational prioritization.

The operating margin at LG Household led all other core operations last year at 15%, and its 23 trillion won market capitalization is twice that of crown jewel LG Electronics.

At home, LG Household enjoys steady earnings from its large domestic share, and the company is rapidly expanding abroad, thanks to aggressive brand acquisitions.

In 2018, when LG Group Chairman Koo Kwang-mo took over his adopted father's position at age 40, one of the first things he did was admonish executives to take on challenges, rather than plan all the time. In the past year, the group installed younger faces in the top spots in core group companies.

LG's market value as a group has fallen to less than half the peak recorded in 2008. During that span, Samsung's value has tripled. It remains to be seen if the young reformers can restore the group to its former glory.