TOKYO -- Nidec, the world's largest motor maker, said on Monday that it is ready to spend almost $10 billion over the next five years to dominate the market for electric vehicle motors.

Nidec is building the capacity to supply 2 million drive motors to Chinese electric vehicle makers and 1 million to European makers. With another motor plant set to come online in Mexico, the company's production capacity is expected to reach 5 million by 2025.

The aggressive spending plan could weigh on short-term profit growth, but Nagamori said it a necessary investment to become a dominant player in the emerging market.

While electric vehicles have already been embraced by Chinese and European automakers, the same cannot be said of the Japanese industry, Nagamori said. 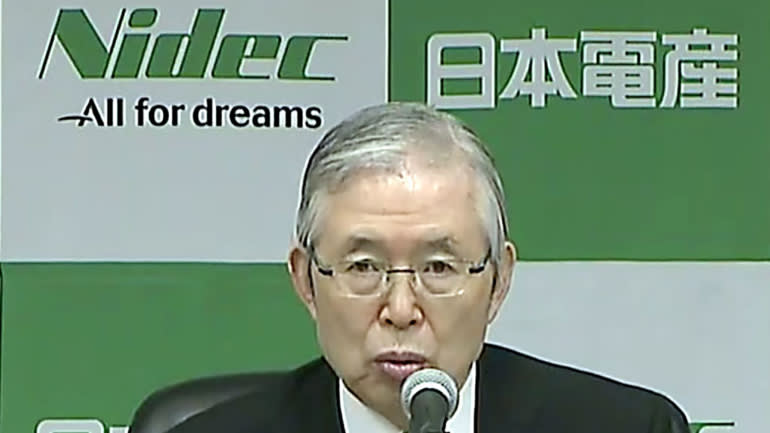 Nidec CEO Shigenobu Nagamori says Japanese automakers are behind their Chinese and European peers when it comes to embracing electric vehicles. (Nikkei photo)

"To me, it is clear that [electric] motors will become the core in every transportation system in the future," Nagamori said. "Both ships and airplanes will also eventually be electrified."

He said that the company has agreements to supply EV motors to 22 automakers, mostly in China and Europe, up from 15.

Nidec increased sales by 50% in the last five years. Its bullish forecast comes as the auto industry begins to pivot from traditional gasoline-powered models to those characterized by connectivity, autonomous, sharing and electrification, or CASE vehicles. The switch can be seen by American auto startup Tesla this year overtaking Toyota as the world's most valuable automaker.

Nagamori said automakers, struggling to cope with rapid technological advances, have started looking to suppliers like Nidec for components so they can focus on their core competence.

"Today, businesses need to change fast or they won't be able to survive the competition," he said.

For the year ending March, Nidec predicts an operating profit of 140 billion yen, up 27% from the year before, instead of the previous forecast of 125 billion yen.

Sales are projected at 1.55 trillion yen, up 1% from the previous year.

But the company reiterated its ambition to achieve 2 trillion yen in sales for the current business year through mergers and acquisitions.

For the six months through September, Nidec's operating profit rose 12% to 69.1 billion yen, helped by strong demand for motors for use in hard disk drives at data centers and for laptop computers.