An Olympus camera on display in a store in 2009. Some enthusiasts were so taken by how Olympus cameras reproduce blues, they came up with the expression "Olympus blue."
MASAMICHI HOSHI, Nikkei deputy editorJuly 1, 2020 13:30 JST | Japan
CopyCopied

TOKYO -- Olympus Corp.'s announcement on June 24 that it plans to spin off its imaging unit, which makes digital and video cameras, and sell it to a private equity firm foreshadows a raft of similar moves ahead.

Japan's digital camera industry was once considered on par with the country's auto sector in terms of international competitiveness. But smartphones have driven camera makers to the brink of extinction, and this year the novel coronavirus slammed the already hobbled industry.

In announcing plans to sell its imaging unit to Japan Industrial Partners, Olympus described current market conditions as "extremely severe." The company had been reorganizing its production facilities and bolstering its profitable interchangeable lens business, but Olympus finished the year through March with a third consecutive operating loss.

Olympus is not the only struggling digital camera maker.

Nikon's imaging unit, which has focused on digital cameras, finished the fiscal year that ended in March with an operating loss of 17.1 billion yen ($158.7 million), down from a profit of 22 billion yen the previous year. In November, the unit drafted a rebuilding plan focused on the "pro-hobby class," which consumes 3 million interchangeable lenses per year. It aims to cut 50 billion yen from its fiscal 2019 operating costs by the end of fiscal 2022. The cuts will come from a reorganization of production plants, a narrowing of products and a personnel reduction. 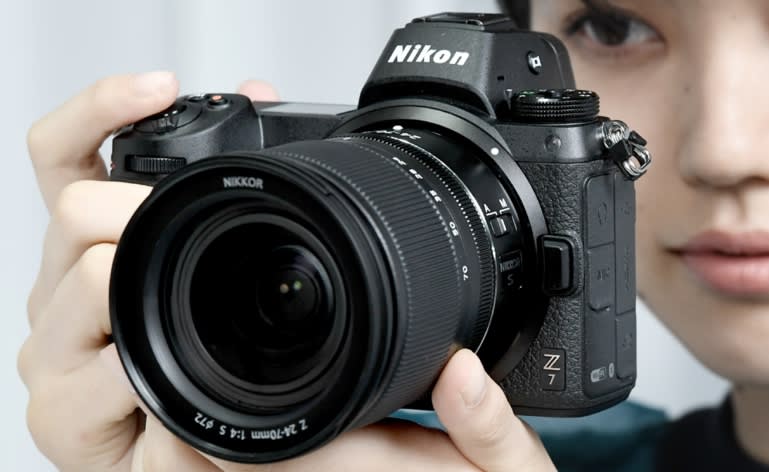 A Nikon camera in 2018. Its maker intends to shed 50 billion yen in operating costs by the end of fiscal 2022. (Photo by Keiichiro Sato)

The digital camera operations of companies like Ricoh and Panasonic also continue to struggle. The operating profit at Canon's imaging system units fell by 48.2 billion yen in the year through December, a 62% drop the previous year. Its profit margin was 6%, a far cry from the 27% it achieved in the same period in 2007, before the Lehman Shock.

So where do these iconic brands go from here?

"A camera foundry model is one option," said a senior executive at an investment bank, referring to contract manufacturing. The executive added that the digital camera industry is headed toward a realignment.

The market for digital cameras peaked at about 121 million units on a shipment basis in 2010, according to the Camera and Imaging Products Association. In 2019, the figure was about 15 million.

The contraction is accelerating because of the coronavirus, with only 2.63 million shipments during the first four months of this year, down 44% from the same period last year.

With the market shrinking at such speed, companies are at great risk of falling into a fixed-costs crisis. Some analysts believe the entire industry will collapse unless companies undertake major reforms, like splitting design and development from manufacturing, and consolidating production.

A decade ago, the industry was expecting a bright future. "Digital cameras maintain their competitiveness thanks to the strength of their business model, as well as the 'comparing and adjusting' that is also present in autos," the Ministry of Economy, Trade and Industry said in its "Industrial Structure Vision 2010," published in June of that year. Digital cameras, along with automobiles, were praised as strongholds of Japanese manufacturing as the country's digital consumer electronics makers were being challenged by Taiwanese and South Korean rivals.

Smartphones are not the only reason Japanese camera makers, who had established an oligopoly nearly everywhere around the world, have come to this point. Japanese industry, which has a penchant for competing against its own products, can also blame itself.

"Digital camera companies intend to strangle their rivals through excessive competition, but in the end they'll strangle themselves," Hiroshi Hamada lamented about 11 years ago. At the time, Hamada was the chief operating officer of Hoya, which had acquired Pentax. He is now the chairman and CEO of Aruhi, a financial services provider.

When he served as president of Dell Japan, Hamada established Dell's direct sales model in the country and helped the company take the third-largest slice of Japan's PC market.

"It looks just like the personal computer industry," he later said of the digital camera sector. "A lot of manufacturers competing excessively."

"Japan cornered the camera market by driving out the Germans," a European camera dealer asked Hamada when he was at Hoya. "Why are Japanese makers now competing among themselves to cut prices?"

At the time, more manufacturers flooded into the market, resulting in annual price drops of 10% or more. Also, the product cycle shortened and models became obsolete at an ever faster pace. This kind of excessive competition is great for consumers, giving them a wider variety and lower prices. But it also reduces manufacturers' investment capacity.

After the debut of digital cameras in the 1990s, Sony acquired Minolta's camera unit, and Ricoh bought Hoya's Pentax operations. But there were nearly 10 companies battling it out in Japan until Casio, which had focused on compact models, pulled out in 2018.

The impact of Olympus' decision to quit the camera business and discard 84 years' worth of experience, may spread. Ricoh's digital cameras are known for their originality, such as having 360-degree capability, but like its peers the company is having difficulty when it comes to profitability. (Photo courtesy of Ricoh)

Last year, Olympus invited two activist investors from U.S.-based ValueAct Capital to join its board as non-executive directors, and in November it announced a medium-term business plan that targets an operating profit margin of 20% or more by fiscal 2023. It was only natural that it would withdraw from its loss-making imaging business.

Ricoh is also exposed to activist investors. With the company already having narrowed and consolidated its operations, such as through the sale of some shares in Ricoh Leasing, the direction of its digital camera unit is worth watching. Inevitably, Panasonic, which in the 2000s jointly developed the mirrorless interchangeable standard Micro Four Thirds with Olympus, also needs to shore up its operations.