Samsung, LG lead the pack in US home appliance market SEOUL -- Samsung Electronics has come out top in the U.S. home appliance market for two years in a row, accounting for one fifth of all refrigerators, washing machines and microwaves sold there, followed by its local rival LG Electronics which pushed U.S. brand Whirlpool into third place.

Samsung attributed the improvement to a rise in sales of its premium refrigerators and washing machines, along with rising revenue from microwaves.

The company's market share in refrigerators hit a record high of 22.7% last year, up from 19.6% in 2016, boosted by sales of its premium French Door model. Its share of this premium segment reached 32.9% last year. 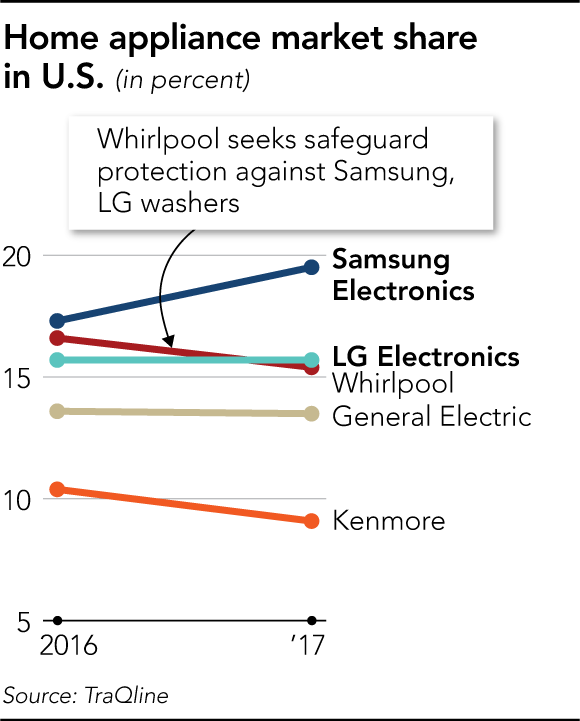 "We have developed premium products based on our research on consumers' lifestyle. We believe that helped us win the top seat in the U.S. home appliance market for two consecutive years," said Choi Ik-soo, an executive at the company's home appliance division. "We will keep our leading position with innovative products and services."

The announcement comes a week after the U.S. imposed safeguard import tariffs of 50% on large residential washing machines, beyond a quota of 1.2 million units in the first year, targeting mainly Samsung and LG. The tariffs followed findings by a U.S. trade commission that increased foreign imports of washers and solar cells were causing substantial injury to domestic manufacturers.

The two companies reacted by saying they would start supplying washers as soon as possible from their U.S. production lines, which are under construction, to avoid the huge tariffs. In 2017, both Samsung and LG announced plans to build large factories in Newberry, South Carolina, and Clarksville, Tennessee, following pressure by U.S. President Donald Trump to increase the local manufacturing base.

The South Korean government said the safeguard tariffs violated agreements of the World Trade Organization because there was no evidence that U.S. manufacturers were suffering severe industrial damage from foreign competition. Seoul's Trade Minister Kim Hyun-chong said he was considering filing a complaint with the WTO against the U.S. over the matter.

Analysts said safeguard tariffs were unlikely to have a great impact on the South Korean companies' earnings, as the amounts they will need to pay will not compare to revenues.

"We estimate that LG Electronics should pay some 50 billion won ($4.7 million) for the tariffs, which is about 3.4% of operating profit in its home appliance division," said Park Won-jae, an analyst at Mirae Asset Daewoo. "Its Tennessee factories will also be operated from third quarter this year."

The benchmark Kospi rose 0.91% to 2,598.19, hitting a fresh record high for three sessions in a row, with investors buying stocks in emerging markets due to the weak dollar.