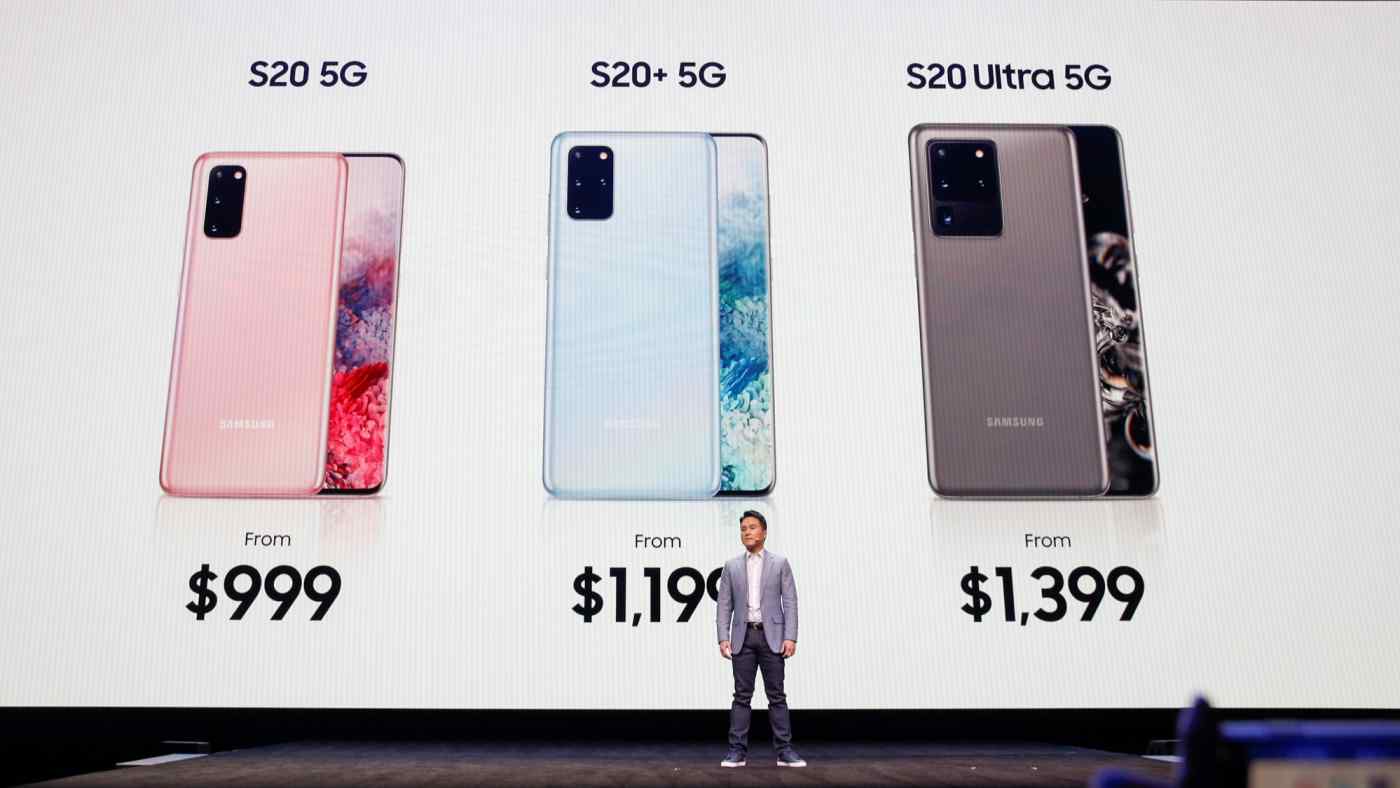 Samsung launches new smartphones in the U.S. at a California event in 2020. The company has greatly expanded its online sales in the country during the pandemic.    © Reuters
KOTARO HOSOKAWA and TAKASHI KAWAKAMI, Nikkei staff writersOctober 9, 2020 01:46 JST | South Korea
CopyCopied

SEOUL/GUANGZHOU -- Samsung Electronics put up one of its best quarters after pivoting its smartphone business heavily toward lower-cost digital sales channels in the middle of a pandemic.

Operating profit in the third quarter surged 58% on the year to 12.3 trillion won ($10.6 billion), the company said Thursday, its strongest finish in two years.

Although a segment breakdown not due until the end of the month, it appears the recovery of the smartphone business drove the income gain

The segment's operating profit jumped 52% to 4.45 trillion won in the three months that ended in September, according to an estimate by South Korean brokerage SK Securities. The black ink would represent a more than doubling from the second quarter and a level not seen in six years.

Samsung shipped 80 million smartphones in the quarter, up 50% from the previous quarter, bringing the company back to pre-coronavirus levels.

Online sales have driven Samsung's smartphone rebound. In places like the U.S., there are cases where the company's website offers handsets at a 50% discount if the customer signs up for a loan and meets other prerequisites.

The web portal used to be centered on showcasing products. The company expanded the chat features on the site to guide customers through the stressful paperwork needed to complete a purchase.

Samsung launched other campaigns offering generous discounts with Amazon.com and other online retailers, as well as with telecommunications companies.

The South Korean company's online consumer sales, of which phones form a large part, accounted for 40% of all sales in the third quarter, according to KB Securities, up from 15% a year earlier. This change reduced sales promotion activities and surplus inventory at physical outlets.

New product announcements have gone virtual as well. Even when pricing in expenses associated with online sales promotion, "marketing costs were held down," said a securities analyst.

The coronavirus pandemic spurred the shift online. "We will accelerate it going forward," said a Samsung executive.

On Thursday, Samsung released the Galaxy F in India, a series geared toward online sales channels. Equipped with three cameras, the phone is available at the $200 level. This price point puts the smartphone well below flagship devices. Still, its functionality exceeds the M series marketed in emerging countries.

India is the world's second-biggest smartphone market, with nearly 50% of phones being purchased online due to the prolonged lockdown. Samsung appears to be planning to expand the phone to other countries based on the response from Indian consumers.

Rivals are also pouring resources into digital sales. This year, 28% of phones will be bought online, according to a July estimate by U.S. firm Strategy Analytics, up from 24% in 2019. However, each rival is dealing with its own unique headwinds.

In the second quarter, Huawei Technologies pulled ahead of Samsung to become the world's leading smartphone producer. The Chinese heavyweight was then hit with additional sanctions by the U.S.

It is likely that Huawei lost momentum in the third quarter due to production slowdowns caused by its limited ability to get its hands on semiconductors.

Because the company has been unable to install updated Google apps on its phones since May of last year, its share in markets outside China has dropped off. Huawei's second-quarter performance was mainly credited to the speedy recovery of the Chinese market after the coronavirus outbreak.

The prospects of China's Xiaomi and Oppo are clouded by product boycotts in India due to the deadly Sino-Indian border conflict. In June, Samsung reclaimed the title of India's top smartphone seller from Xiaomi, according to Hong Kong market researcher Counterpoint. Samsung has reportedly kept the crown for three straight months.

Apple usually announces its new iPhones in September, but complications in procuring components have delayed this year's event. With both Chinese and U.S. competitors hitting snags, Samsung is free to rebound from the coronavirus impact, thanks to its successful online sales strategy.

The industrywide shift to online stores will hugely impact physical outlets. The rapid rise of smartphones has produced a complicated brick-and mortar network that includes stores directly managed by manufacturers themselves, as well as cellphone carrier outlets, electronics stores and specialty shops. Whether makers can build an effective online presence will determine who will survive in the new normal.