Ex-Nissan executive to oversee development of drives for electric vehicles KYOTO -- Nidec's operating profit rose 15% on the year in the October-December quarter, the Japanese motor maker said Thursday, marking the first gain in five quarters thanks to growing sales of high value-added products such as energy-saving motors to China.

Because of increased investment to start production of electric-vehicle motors, however, the Kyoto-based company downgraded its earnings forecast for the year ending this March.

"We have pretty much bottomed out," founder Shigenobu Nagamori, chairman and CEO, said at an earnings briefing that is regarded as a bellwether for Japanese manufacturers' quarterly results.

The rise in profit to 32.6 billion yen ($297 million) was driven in large part by sales of energy-saving motors for air conditioners in China.

Structural reforms at the company contributed as well. One step was shifting the focus of a Philippine factory from hard-disk drive motors to areas with more growth potential. Asian sales, which include China, increased 15%. 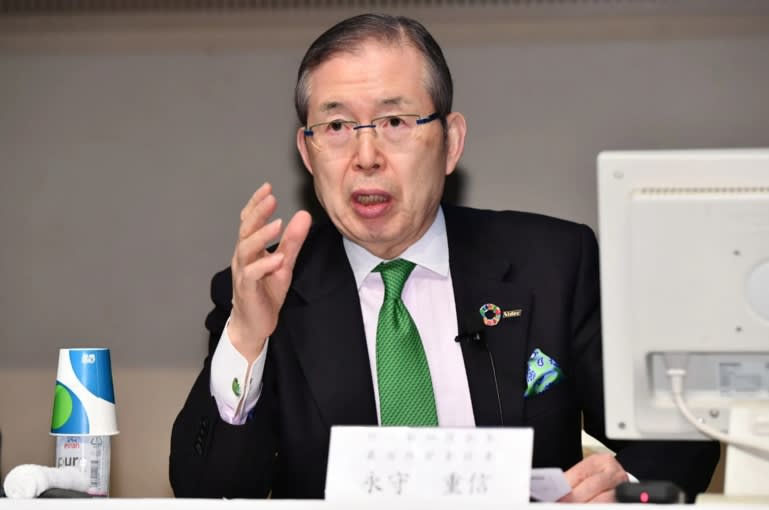 In electric-vehicle motors, "the size of the investment is big, but so are the returns," Nidec CEO Shigenobu Nagamori told an earnings conference on Jan. 23. (Photo by Shihoko Nakaoka)

Nagamori said former Nissan Motor vice chief operating officer, Jun Seki, will be in charge of the automotive segment that oversees development and production of motors for electric vehicles. Seki cut short his stint as Nissan's No. 3 executive in a surprise move late last year. Nagamori decline to comment on details such as his title.

Long a major player in precision motors, such as those used in hard disk drives, Nidec sees electric vehicles as a new source of growth.

The earnings forecast for the current fiscal year was cut for the second time. Nidec is seeing an increase in orders from Chinese and European auto and component manufacturers. In response, it spent 12 billion yen more than originally planned for the development and start of production for electric-vehicle motors through December of last year.

Nidec has traditionally kicked off earnings announcements for major Japanese companies with fiscal years ending March 31 and has attracted the attention of investors looking for trends. A year ago, Nagamori had described an "abnormal" slump in Chinese demand.