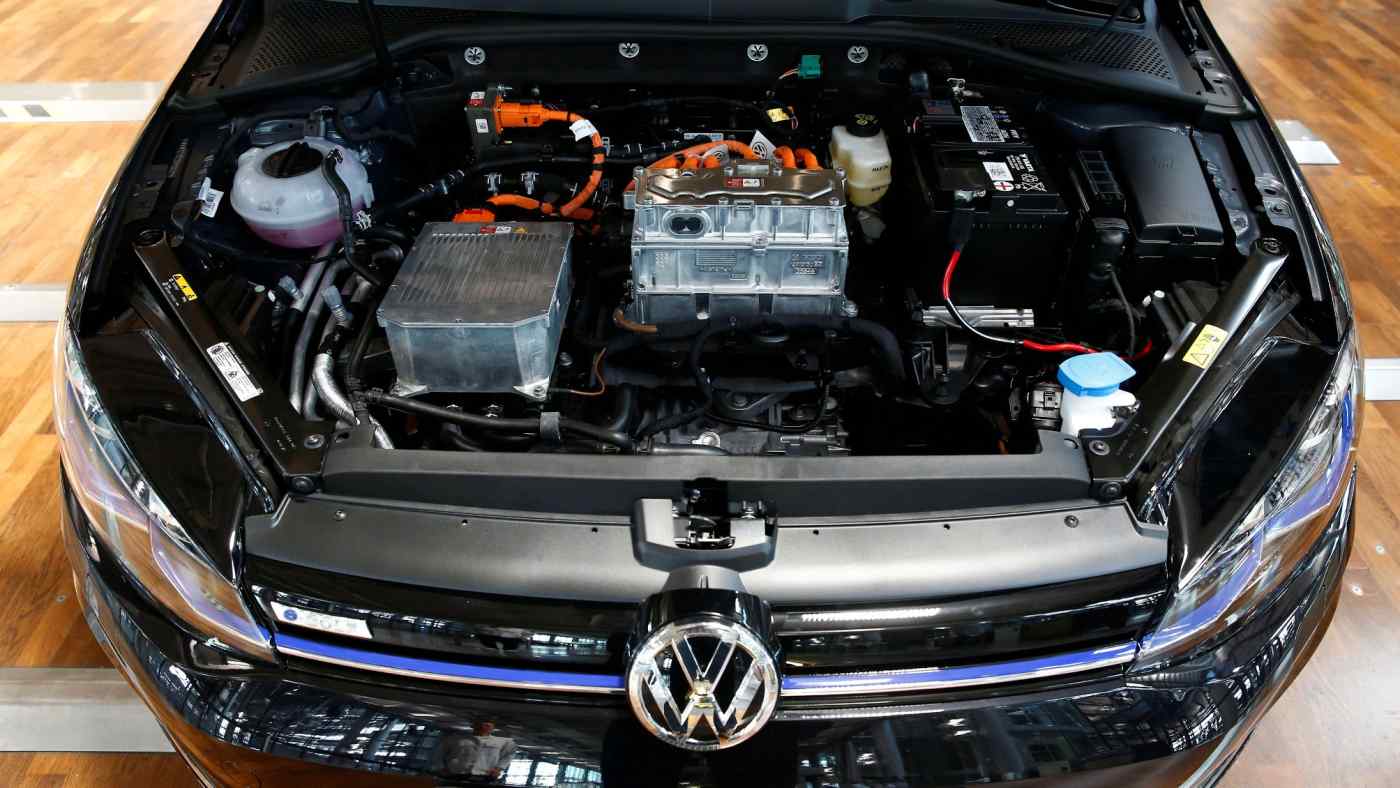 TAIPEI -- Taiwan Semiconductor Manufacturing Co., the world's largest contract chipmaker, and Taiwanese peers are considering another round of price increases mainly on automotive chips, Nikkei learned Monday, as a global semiconductor shortage puts pricing power firmly on their side.

The hikes of up to 15% are being considered by Vanguard International Semiconductor, a TSMC subsidiary that makes auto chips, along with other Taiwanese players including No. 4 foundry United Microelectronics Corp.

If the Taiwanese suppliers do successfully negotiate higher prices, that would mark the rare case of two substantial hikes within just a few months, after a round of increases that began last fall. Their aggressiveness shows how they now occupy the driver's seat in price negotiations with automakers.

When contacted by Nikkei, UMC Chief Financial Officer Liu Chi-tung said he "can't answer questions about prices." But he added that "it's true that we chipmakers are in a relatively advantageous position based on the supply-demand balance."

Any new increases are expected to be phased in from the second half of February into March.

The Taiwanese foundries appear to have reached out to customers that specialize in automotive chips, including the Netherlands' NXP Semiconductors and Renesas Electronics of Japan. Renesas, NXP and peers have already asked automakers to accept higher prices, and further increases would likely dent auto companies' profit margins.

In the last round of hikes, chip foundries reportedly raised prices by 10% to 15% in response to a wave of additional orders, some urgent, to meet demand from automakers ramping up production.

The hikes come amid not only continued tightness in global chip supplies, but also a stronger Taiwan dollar. The currency has appreciated about 6% against the U.S. dollar over the past year.

Carmakers typically negotiate prices with parts suppliers once a year. Auto companies generally seek cuts of around 2% to 3% to drive profit growth. Now, the tables have turned as chipmakers demand that their customers pay more, underscoring the severity of the shortage. 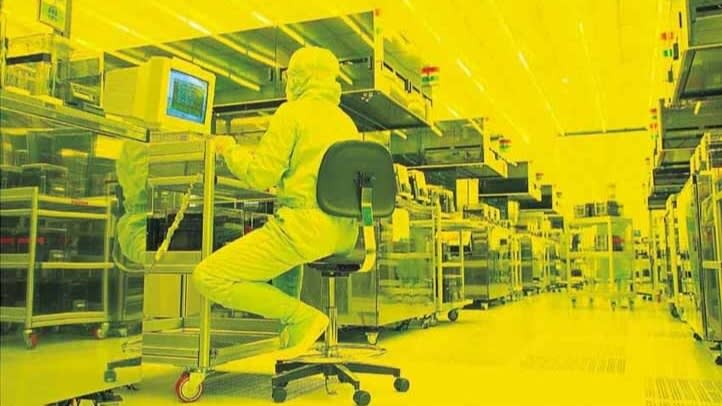 TSMC, as one of just a handful of chipmaking giants, is well positioned to capitalize on surges in demand. (Photo courtesy of TSMC)

Automakers look likely to face the twofold problem of being forced to cut back production due to a lack of semiconductors, while at the same time swallowing higher manufacturing costs.

The chip shortage was triggered by the U.S. government's trade sanctions on Chinese companies including Semiconductor Manufacturing International Corp. and has worsened because of a steep increase in demand from automakers.

The coronavirus pandemic forced automakers to sharply reduce vehicle production in the spring of 2020. With China succeeding in curbing the spread of infections, however, the nation's auto market began to stage an astounding recovery, logging a year-on-year sales gain of 11% in June.

"We couldn't make bullish production plans as we thought of orders for chips and other parts in the following three months," an executive at a top Chinese carmaker said, the effects of the global infection spread in mind.

Another development began to appear in July. With the U.S. administration of then President Donald Trump toughening sanctions on Huawei Technologies, the Chinese technology company began that month to place massive orders with TSMC and other Taiwanese makers to secure enough chips before the new package of American sanctions was put into effect in September. The "ferocious" orders, as an industry official in Taiwan described them, made TSMC and other local manufacturers unprecedentedly busy starting in July.

In mid-September after the launch of new U.S. sanctions on Huawei, the Taiwanese chip industry was hit by a "second arrow" as word began to circulate that the Trump administration would aim its sanctions at SMIC. Qualcomm of the U.S. reacted immediately, sending officials to TSMC, UMC and other Taiwanese makers of chips to procure them in large quantities in place of SMIC.

TSMC commands a little more than 50% of the world market for contract chip production. The combined share of TSMC and UMC is about 60%. But the two Taiwanese companies had already been busy trying to meet orders for chips for use in personal computers, game consoles and iPhones arising from strong stay-at-home demand caused by the pandemic.

There was also a technological problem. SMIC produces low-end standard chips used in sensors and electric power sources and that offer small profit margins. But they are indispensable to a variety of products. 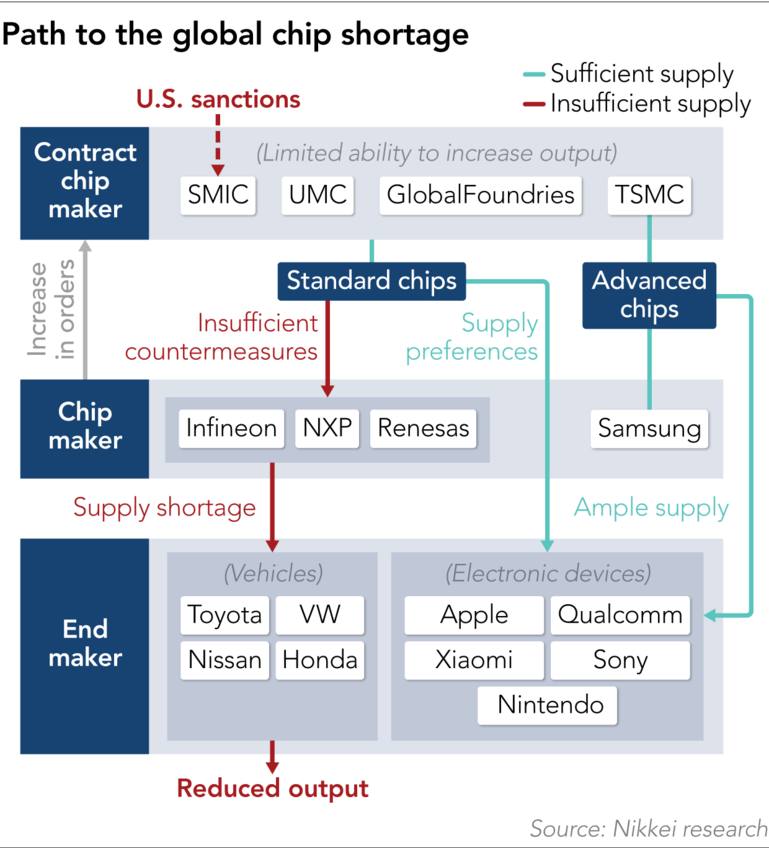 TSMC and UMC accepted orders for such chips from Qualcomm and other companies. Starting in September, they became busier than ever

Confusion further increased as carmakers successively decided to boost production in October after the Chinese auto market's double-digit growth in August and September, abandoning their wait-and-see stance held until July.

But chipmakers like Infineon Technologies of Germany were not ready to cope with the sudden surge in orders from automakers and thus farmed out production to other companies like TSMC and UMC, something they often do when they cannot fully meet orders.

But as Taiwanese manufacturers had already been operating at full capacity, they have put on ice the production of chips for automobiles, which usually use standard chips, thus aggravating the shortage.

Asked when the chip shortage might ease, UMC's Liu said: "Our plants are already running at full capacity, so it will be difficult to increase output in the short term."

"I don't know when [the shortage] will be resolved, but it will take us at least another six months to have production lines ready," Liu added.

Government officials in Germany, the U.S. and Japan have asked Taiwanese authorities to help deal with the auto chip shortage, an unusual step that likely also plays into the price hikes under consideration.

The effects of the shortage could ripple through the semiconductor supply chain, beyond chip manufacturers such as TSMC and UMC. ASE Technology Holding, a prominent Taiwanese semiconductor packaging company, is believed to be considering raising prices by about 10%.

And prices across the industry may continue marching higher as shortages extend beyond autos to other types of products, such as home electronics.

Semiconductor production was dominated by Western countries and Japan in the industry's early years. But the digital revolution of the 2000s drove up capital spending requirements and triggered sharp swings in market conditions, driving many players out of the game. Those that remain are either giants like TSMC and Samsung Electronics, or smaller players that specialize in particular products like autos and home electronics.

Taiwanese authorities have supported the island's semiconductor industry since the 1980s. Chip companies here rode out the market's ups and downs, and many stayed put even as they struggled financially. Now, with less competition to contend with, they can reap the benefits when global chip supplies are tight, which helps further solidify their strong position.

TSMC logged a 25% rise in revenue and a 50% jump in net profit for 2020, both reaching record highs. UMC's net profit tripled on the year in the July-September quarter.