Elite gamers do battle in a Bangkok mall

Businesses and government aim turn Thailand into an e-sports hub BANGKOK -- Once upon a time, video gaming was a private duel between two players, or maybe a small group of friends online. These days, elite gamers can battle it out in front of huge audiences.

Looking to capitalize on the popularity of so-called e-sports, part of a shopping mall in Bangkok is being transformed into an e-sports hub. The project is led by Pantip Plaza, owner of the mall specializing in electronics. The government is teaming up with companies to cash in on the growing gaming market.

In mid-August, E-Sport Arena opened in Pantip Plaza, one of the country's largest retail centers for information technology. The arena has three huge screens set up over a stage. A row of computers bathed in blue light slopes down toward the audience. Images of game characters are projected onto the wall at the back of the arena. The futuristic venue seems somewhat out of place inside the aging mall. The roughly 620-sq.-meter arena seats about 300 people. It is meant to attract the world's top gamers, giving them a chance to show off their skills. It is the first venue in Thailand devoted exclusively to e-sports. Veerarit Somboonsub, asset manager of Pantip Plaza said he wants to turn the shopping mall into a major esports hub.

Despite sluggish consumption overall, the Thai gaming market has been growing steadily, and gaming is a leader for the broader IT industry, the asset manager Somboonsub said, leading to the idea of creating an esports arena. He invested 25 million baht ($755,000) to renovate part of the shopping mall to build what he envisioned as one of the largest such venues in Southeast Asia. He is already planning to build another in Chiang Mai, in the north of the country. The hard life of an 'ex-Kon'

The government and other companies are also supporting Pantip's effort. The list of public and private sponsors and supporters include big names from both Thailand and overseas, including the Ministry of Digital Economy and Society's Digital Economy Promotion Agency, or DEPA, and Google, the U.S. online search giant. They hope to promote the gaming industry by holding competitions and other events.

The asset manager is also keen on training players and game developers. He is cooperating with DEPA, the Thai Game Software Industry Association, the Thai E-Sports Association and others to set up an e-sport academy. The plan is to train players who can compete on the global stage, as well as game developers.

The Thai government is pushing for digitization and the digital economy in an effort dubbed Thailand 4.0. But it is likely to be some time before Thailand produces an app or technology that becomes a global hit. As the country struggles to escape the "middle-income trap," innovation in the gaming industry may be the key -- or so the government hopes. 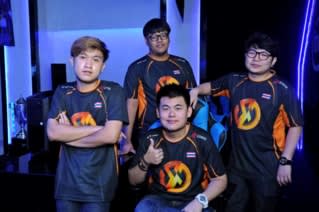 Thais love games. According to Niko Partners, a U.S. research outfit, among six big Southeast Asian economies, Thailand has a relatively high percentage of heavy gamers, defined as those who play 21 hours or more per week. That makes it a promising market, along with Indonesia and Vietnam.

According to Pantip, Thailand's games market was worth 6 billion baht in 2016 and is expected to reach 10 billion baht this year.

There are more big competitions these days, with huge prizes given to winners, boosting Thailand's e-sport market. Signature.PB, a five-member Thai e-sport team that won 1 million baht in an international competition in Russia, said e-sports has reached the stage where people who make a living as professional game players.

According to an estimate by Niko Partners, Southeast Asia's online video game market is expected to continue growing, reaching $3.3 billion by 2020, up 80% from 2016. Pantip hopes to grab a big chunk of that by providing a convenient venue for gamers to compete.