TOKYO -- The drone strike on Saudi Arabian oil facilities on Saturday highlighted new vulnerabilities in the global crude market, shattering expectations of a downtrend in oil prices and pushing distributors to consider a potential shortage in supply.

Most market players had believed that supply would not decline drastically, regardless of tensions in the Middle East. This kept prices from topping the recent high marked in October 2018, even after oil tankers were attacked in the Strait of Hormuz near Iran this June.

But Saturday's attack sent Asian distributors scrambling for information, especially given their growing dependence on Saudi oil amid U.S. sanctions on Iran.

"We don't know the extent of the damage," Japan's Cosmo Energy Holdings said. Others also struggled to paint a clear picture as of Monday.

A halt in shipments from Saudi Arabia, which accounts for almost 40% of Japan's crude imports, "will have much more serious consequences than the embargo on Iran," said a source at JXTG Nippon Oil & Energy, a unit of JX Holdings.

In South Korea, the government said it is prepared to release oil reserves if necessary, according to local media reports.

U.S. President Donald Trump told reporters Monday that he believed Iran was to blame. Asked by a reporter at the White House if Iran was behind the attacks, Trump said: "It's certainly looking that way at this moment and we'll let you know. As soon as we find out definitively we'll let you know but it does look that way."

On Sunday, Trump had tweeted that "There is reason to believe that we know the culprit," and that the U.S. was "locked and loaded depending on verification," hinting at retaliation if it was proved that Iran was responsible. 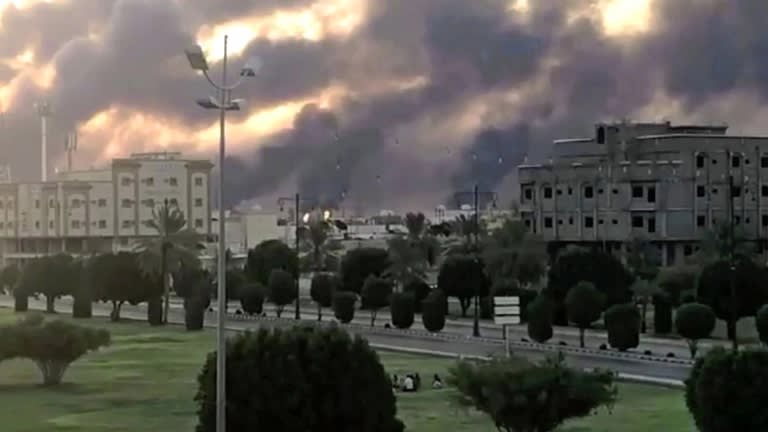 Saudi Arabia, one of the world's biggest oil producers along with the U.S. and Russia, holds most of the world's spare production capacity. The world's major oil producers excluding Iran have spare output capacity of about 3.2 million barrels a day, according to the International Energy Agency. Saudi Arabia accounts for about 70% of that, at around 2.3 million.

The kingdom has taken a leading role in coordinated production cuts across OPEC. It is also the only country that can quickly ramp up output should the need arise. For it to take a hit of more than 5 million barrels in daily production means that the oil supply could come up short of demand even with all of the world's excess capacity.

On the Tokyo Commodity Exchange on Tuesday, crude oil futures opened the post-holiday session sharply higher, surging 12% from last week's close at one point to hit a two-week high. But analysts noted that the upside appears limited for now, following announcements by the U.S. and other governments that they are considering releasing oil from their reserves.

South Korea's government will consider releasing its strategic oil reserves in case of supply crunches, the Yonhap News Agency quoted a senior government official as saying. The official spoke after an emergency meeting on Monday between the government and South Korean oil refiners.

Meanwhile, the China Daily, an official newspaper, reported on Tuesday that China would be capable of providing oil at home if imports from Saudi Arabia were affected. Saudi Arabia has been China's top oil supplier this year.

Japan has multiple options to fill any gap.

The government has leased oil storage facilities in Okinawa to Saudi Aramco since 2011. Though the state-owned Saudi titan usually sells this crude to Southeast Asian countries, it will give priority to Japan in an emergency. Tokyo also has a similar arrangement with the United Arab Emirates. Together, these provide access to about 1.9 million kiloliters of oil -- enough for five days of demand.

Japan can release oil from its own stockpiles should this prove insufficient. All told, the country could tap 81.65 million kiloliters of crude and petroleum products in late June, equivalent to 231 days of consumption.

"Even if supply is reduced, there won't be any serious turmoil," said an official with the Ministry of Economy, Trade and Industry.

Whether national reserves would last long enough for Saudi Arabian output to return to normal remains an open question, however.

Reserves provide a safety net to avoid short-term supply disruptions, but starting to draw them down would add to market jitters. And the drone attack has laid bare the vulnerability of Saudi oil facilities. Players in the crude market are likely to demand a higher risk premium, driving up prices.

"It's impossible to be optimistic now," said Naohiro Niimura of Market Risk Advisory in Tokyo, who sees benchmark Brent crude heading to between $70 and $75 a barrel.

"If an all-out conflict broke out between Saudi Arabia and Iran, [Brent crude] would probably break $100," Niimura said.

Japan is keeping a particularly close eye on the impact on liquefied natural gas, whose price is often linked to crude prices in purchasing contracts.

The country has grown more reliant on LNG as a power source since taking its nuclear power plants offline in the wake of the March 2011 earthquake and tsunami. A rise in the fuel's cost could translate into higher electricity rates.

"It would have an impact on the economy," said a source at JERA, Japan's top provider of fossil-fuel energy.

A spike in oil prices from a supply shock would further drag on a global economy already hit by trade tensions between the U.S. and China.

If the increase continues into the colder months, it will "overlap with rising demand for heat, and the effect on prices and the economy would become impossible to ignore," said Takayuki Homma, chief economist at Sumitomo Corp. Global Research.

Travelers may be affected as well. Japan Airlines reflects oil market fluctuations in its fuel surcharges, with a roughly four-month lag, and will likely charge more if crude prices remain elevated.