A man pours petrol into an underground tank at a fuel station in Mumbai. The Trump administration's move to end a sanctions waiver on oil imports from Iran has pushed the price of Brent crude to a five-month high.   © Reuters
KIRAN SHARMA, LAULY LI and JADA NAGUMO, Nikkei staff writersApril 23, 2019 19:13 JST | India
CopyCopied

NEW DELHI/TAIPEI/TOKYO -- Most Asian oil importers shrugged off ramifications of U.S. President Donald Trump's decision to impose sanctions on all buyers of Iranian oil, saying they will seek alternative suppliers.

The White House turned the thumb screws on Tehran by announcing it will cancel sanctions exemptions on all importers of Iranian oil, with the waivers ceasing on May 2. The move pushed Brent crude to a five-month high on Tuesday.

The U.S. in November granted six-month waivers to eight importers, permitting them to buy limited quantities of Iranian oil before a phased reduction to zero. Five are in Asia -- Japan, China, South Korea, Taiwan and India -- with the remainder being Italy, Greece and Turkey.

China and India account for most of Iran's oil exports, taking in 400,000 and 300,000 a day, respectively, according to a market insider. Beijing was the only one of the five to react angrily to Trump's move, sticking to its consistent stance of opposing U.S. sanctions on Iran.

On Tuesday, China lodged a formal protest over the U.S. move. "The decision from the US will contribute to volatility in the Middle East and in the international energy market," Foreign Ministry spokesman Geng Shuang told reporters in Beijing.

India, which imports more than 80% of its oil to fuel its rapidly growing economy, was more sanguine.

"We are adequately prepared to deal with the impact of this decision," New Delhi said in a statement. The "government will continue to work with partner nations, including with the US, to find all possible ways to protect India's energy and economic security interests."

Dharmendra Pradhan, India's minister of petroleum and natural gas, on Tuesday tweeted that India has a "robust plan" in place to get an adequate supply of crude.

"Indian refineries are fully prepared to meet the national demand for petrol, diesel and other petroleum products," he said. "There will be additional supplies from other major oil producing countries."

State-run companies such as Indian Oil Corp. and Bharat Petroleum Corp. are among the companies that have been importing oil from Iran.

Trump on Monday said OPEC nations such as Saudi Arabia can "more than make up" for any fall in supply from Iran. Oil tankers pass through the Strait of Hormuz. Iran has threatened to close the waterway, a choke point between the Persian Gulf and the open ocean.   © Reuters

Japan, South Korea and Taiwan also played down the impact of Washington's harder line against Iran.

Hiroshige Seko, Japan's minister of economy, trade and industry, on Tuesday said Japan expects the impact to be limited and that the government will not need to tap national oil reserves. "We will closely watch international oil markets and exchange views with Japanese companies involved in crude imports," Seko said. "[We] may consider taking necessary measures."

The issue is likely to be on the agenda when Japanese Prime Minister Shinzo Abe travels to the U.S. this week for talks with Trump.

South Korea said it will keep talking with the U.S., with its foreign ministry saying it will do its utmost to have its position reflected by the May 2 deadline.

Taiwan's two oil refiners said they expect their businesses to suffer little impact, as they stopped buying Iranian oil after Washington imposed the sanctions on Iran in November,

J.Z. Fang, spokesperson of state-run CPC Corp., Taiwan, told the Nikkei Asian Review that the company has been buying more oil from other countries since the end of last year.

Formosa Petrochemical, a privately owned oil refiner, said much the same thing but warned the global crude supply could tighten in the first half of this year.

"Global oil prices will react and increase for a while when overall supply is decreased following the U.S.'s move to ban Iranian oil exports," said Lin Keh-yen, executive vice president of Formosa Petrochemical. 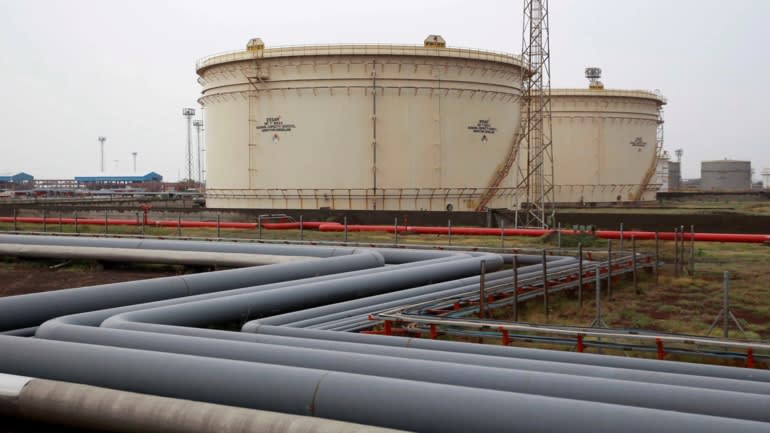 Storage tanks at an Essar Oil refinery in the western state of Gujarat, India.    © Reuters

Of perhaps greater concern to oil importers in Asia is Iran's repeated threat to close the strategic Strait of Hormuz.

"According to international law, the Strait of Hormuz is a marine passageway and if we are barred from using it, we will shut it down," General Alireza Tangsiri, the commander of the Revolutionary Guards' navy, was quoted in Iranian media as saying.

Tom O'Sullivan, founder of Mathyos Global Advisory, said this is his biggest fear. The strait is seen as a choke point; it is the only sea passage from the Persian Gulf to the open ocean.

"If Hormuz is closed then any assurances that [U.S. Secretary of State Mike] Pompeo secured from [the] UAE and Saudi [Arabia] to increase production might be academic," O'Sullivan told Nikkei. "This may be pushing Iran into a very tight corner that might create an appetite for revenge."

Nikkei staff writers Kim Jaewon in Seoul, CK Tan in Shanghai and Andrew Sharp in Tokyo contributed to this report.