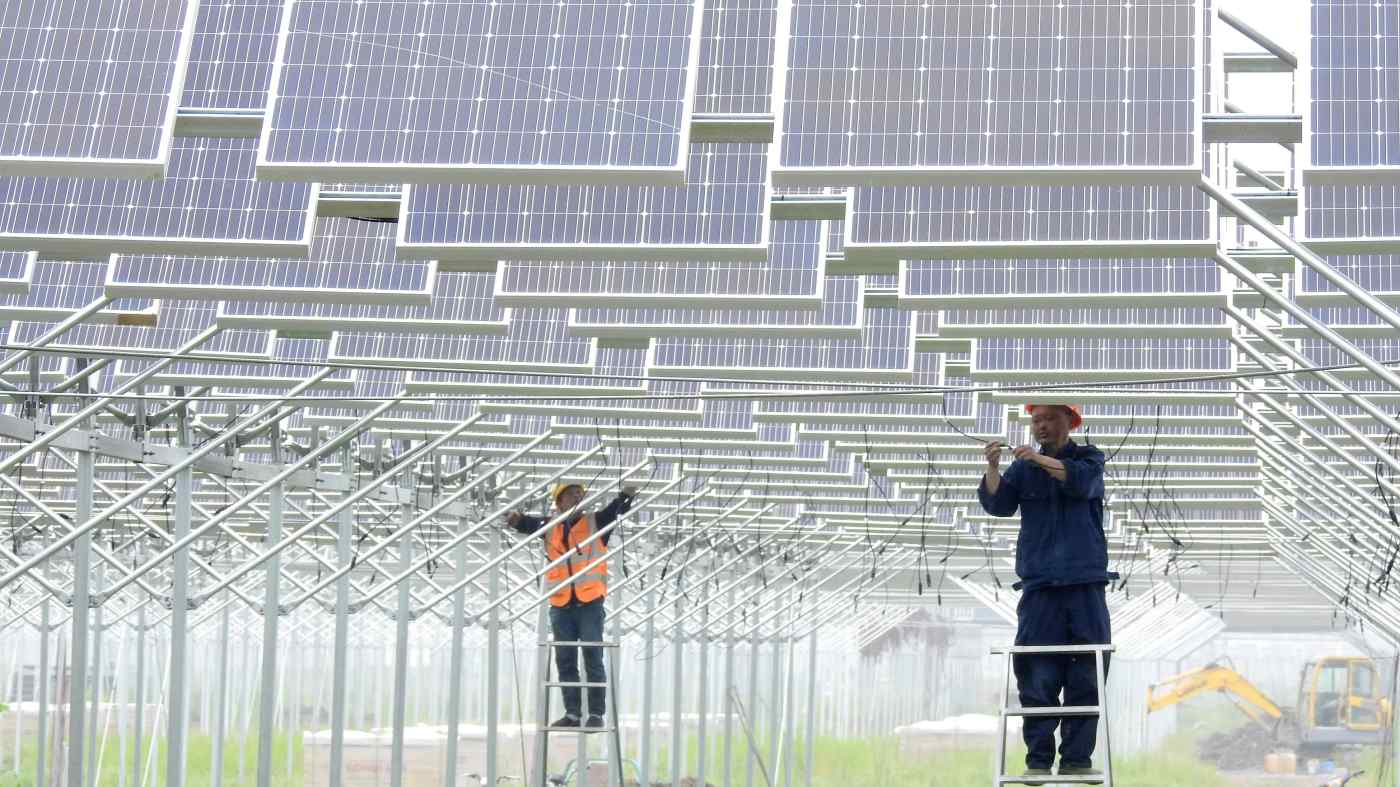 SHANGHAI -- Chinese manufacturers of solar panels are devising output-boosting innovations to ensure continued survival in the face of plunging prices and cuts to the government's feed-in tariff that have eroded demand and raised fears of a fresh supply glut.

Such technology featured prominently at the world's largest solar power expo, which recently wrapped up here. JinkoSolar Holding exhibited solar modules with a backsheet that can generate power from light reflected off the ground, which the company says can increase power generation as much as 30%. Vice President Dany Qian said the company expects such bifacial modules to become mainstream.

Trina Solar has developed a mounting system that lets solar panels track the path of the sun, pointing east in the morning and tilting westward as the day goes on, to maximize energy input.

Huawei Technologies has unveiled a proprietary artificial intelligence system that analyzes such factors as the weather and reflected sunlight to fine-tune the positioning of solar panels.

Chinese companies control roughly 70% of the global market for solar panels and constitute eight of the top 10 manufacturers. The government's 2011 introduction of a feed-in tariff sparked a rush to build solar farms, and China accounted for more than half of worldwide panel demand in 2017.

But the government said in May 2018 that it would cut the price it pays for solar energy by 10% and exclude new megasolar facilities from the tariff, and industry watchers speculate that subsidies could end altogether as soon as 2020. Chinese players are scrambling to improve performance to ensure solar can remain profitable even without government incentives. While such Japanese companies as Kyocera and Panasonic beat most Chinese rivals on efficiency, their panels are costlier and more complicated to produce and are priced around 30% to 50% higher as a result. Chinese manufacturers employ innovative methods to boost performance while using cheaper materials that let them price their offerings competitively.

By capitalizing on economies of scale that enabled production of a flood of low-cost panels, Chinese companies vaulted past the Japanese and European players that once led the market.

The situation changed after the European Union decided in 2013 to impose anti-dumping duties on Chinese solar panels that it had found were being imported and sold at unfairly low prices. This brought on what has been called the bursting of China's renewable-energy bubble. Former market leader Suntech Power Holdings -- once dubbed the "king of solar" -- filed for bankruptcy protection, and second-tier companies struggled.

But the situation now carries echoes of 2013. In a prelude to the current trade war, U.S. President Donald Trump's administration imposed a safeguard duty on solar panels early last year -- Washington's first use of such levies in 16 years. This has throttled Chinese players' access to the world's third-largest market.

Panel makers are responding to these looming headwinds with new technology to cut power generation costs, seeking to tap markets such as Africa that lack the resources to provide effective state support for renewable energy. They also hope to gain a larger foothold in Japan, which is set to overhaul its own feed-in tariff in late fiscal 2020.

European industry group SolarPower Europe forecasts between 84.5 gigawatts and 165.4GW of new solar capacity this year. The lower end of this range would represent a decline from last year's 102.4GW. If the spread of solar stalls, damaging price wars could rage once again.