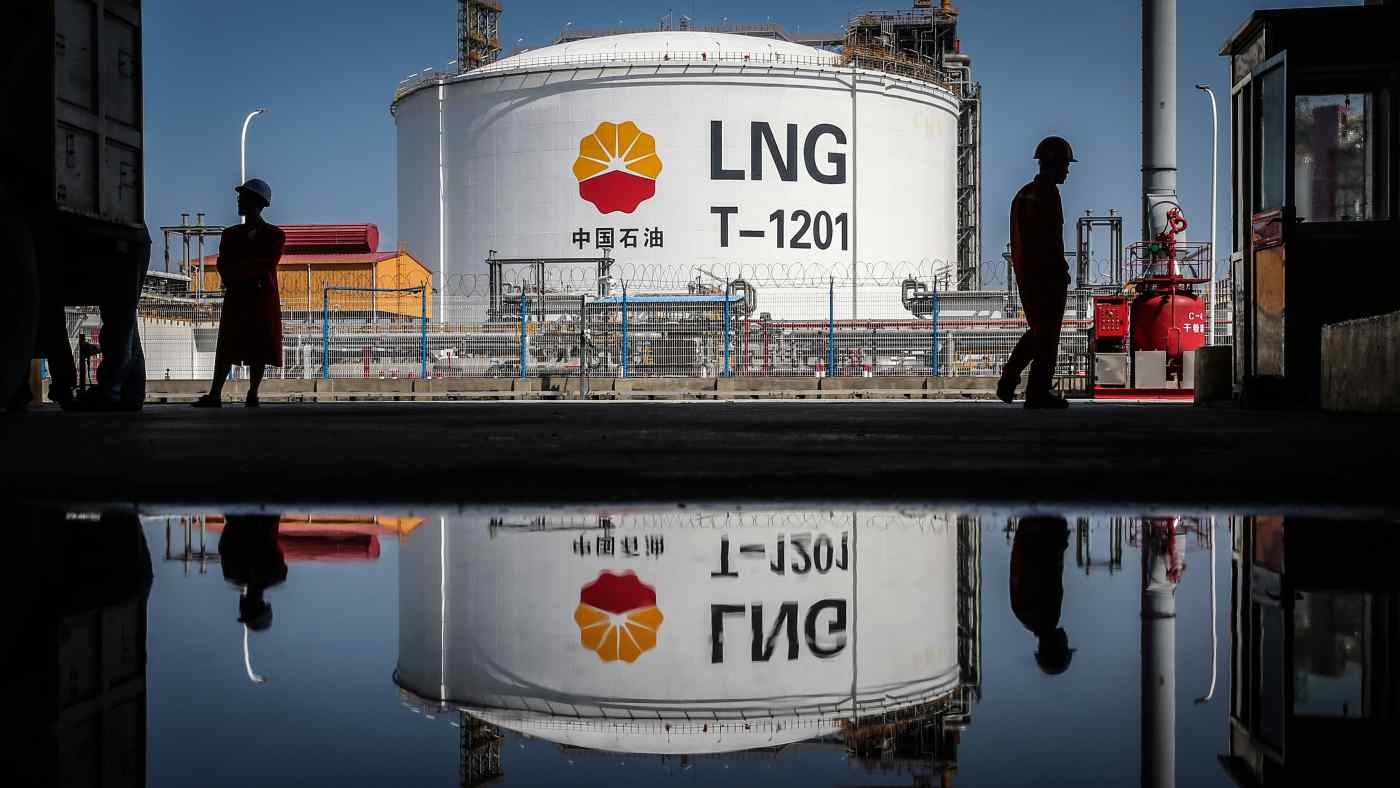 TOKYO -- All three of China's major oil producers have suggested they will slash capital expenditure this year as the novel coronavirus outbreak and plunging oil prices play havoc with their planning and raise the risk of impairment losses across the industry.

"We are facing a severe challenge in terms of our first-quarter operating results," said Zhang Yuzhuo, chairman of China Petroleum & Chemical, more widely known as Sinopec, at the company's conference call on Monday. In order to deal with the critical situation, the newly appointed chief said the company has kicked off a 100-day internal cost-cutting campaign, mobilizing the whole organization to improve efficiency.

One of the main targets of the campaign is capex. The company spent 147.1 billion yuan ($20.72 billion) last year, a 25% increase from the year before, and it was originally preparing to splash out another 143.4 billion yuan this year, but it is now scrutinizing ways to cut that figure as much as possible.

"The company is now actively deliberating on how we could decrease our capex," Zhang said. The point, according to him, is to rigidly examine the return and the cost, and he pledged to publicly announce the recalculated capex plan in April.

It is a similar story for PetroChina. The company allocated 296.7 billion yuan in capex last year, which was 16% more than the year before, and the board has earlier approved 295 billion yuan for this year. But Chai Shouping, its chief financial officer, said during its conference call on Thursday that the company is currently drawing up a capex plan "linked to the oil price." He did not give much details on the new mechanism but added that the objective is to "make ends meet" and ensure a positive free cash flow.

CNOOC, smallest among the three in terms of size, has also been forced to revise its original capital spending plan of 85 billion to 95 billion yuan for this year, announced in January. CEO Xu Keqiang said on Wednesday that his company has embarked on "a large scale trimming of 2020 capex." He vowed to "strictly control" investment, costs, and number of employees.

It is extremely unusual for one, let alone all three, of China's oil majors to fail to provide a figure for expected capital spending at their March earnings briefings. 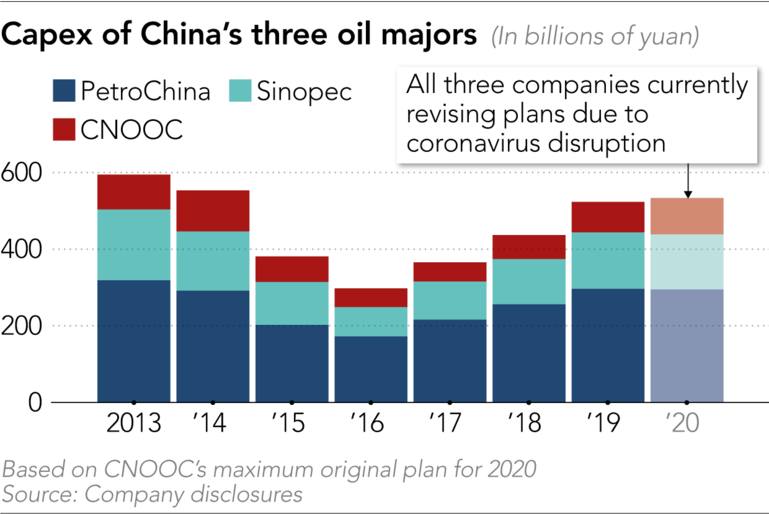 Capex by the three state-owned companies often serves as convenient tool for Beijing to prop up the economy, especially in difficult times like these, with China also embroiled in a trade war with the U.S. and the economy already slowing. The push for energy security was an additional driving force behind the 20% jump in total capex to 523.4 billion yuan last year, when the main focus was on domestic exploration in order to enhance production capacities at home.

This year was supposed to follow the same path, as the sum of the original capex plans was at par or bit more than in 2019. But the collapse of a deal among major oil producing countries to limit output has left those plans in tatters. The price of West Texas Intermediate went from $63.30 per barrel in early January, when tensions between the U.S. and Iran rose sharply, to below $20 on Monday following Saudi Arabia's declaration earlier this month that it would ramp up oil production.

To reduce its reliance on imported oil, Sinopec has been developing and investing in coal liquefaction, a process in which oil products are produced from coal. According to Zhang, a leading expert on the technology, the process only makes economic sense when crude prices are over $60 a barrel. If oil drops below $35 per barrel, it "completely loses competitiveness," he said. If low oil prices persist, the project could come under pressure.

"No China O&G [oil and gas] name can escape collateral damage from oil price weakness," said Dennis Ip, energy sector analyst at Daiwa Capital Markets in Hong Kong in a note last Tuesday. An industry-wide capex cut, now seen as inevitable, will damage the prospects for surrounding and supporting sectors in the form of lower revenue and squeezed margins, he added.

The sector has already been punished by the equity market. CNOOC's share price has fallen around 40% since the beginning of the year while PetroChina is down over 20%. Ip rates CNOOC as "underperform" and PetroChina as "hold," while he still advices "a tactical underweight" on the sector as a whole "until there is a clear sign of an oil price rebound," which may take a long time.

Developments at their Japanese peers could serve as a grim warning for the Chinese players.

JXTG Holdings, the largest oil refiner and producer in Japan, on Thursday cut its annual net profit forecast by 455 billion yen ($4.2 billion) for the financial year ending in March, dragging its bottom line to a 300 billion yen loss. The main culprit was inventory write-offs prompted by the sharp decline in crude oil prices, while its oil and natural gas development projects in the Middle East and North America were also forced to book about 90 billion yen of impairment losses.

Two of the major Japanese trading houses with oil and gas exposure were similarly hit. Marubeni on Wednesday reduced its net profit outlook by 390 billion yen, taking it to an expected 190 billion yen loss for the year through March. The main driver was the impairment loss and reversal of deferred tax assets of 145 billion yen on its oil and gas assets in the Gulf of Mexico and the North Sea. Its competitor Mitsui & Co. said on Friday that it anticipates an impairment loss of 50 billion to 70 billion yen on its investments in U.S. shale gas assets and an Italian oil field.

Indeed, impairment charges have been a matter of constant concern for the Chinese oil majors, even when the oil prices were stable. CNOOC booked 2.09 billion yuan of impairments last year, mainly due to a "decrease of reserves" in certain oil and gas properties located in North America and China, according to its latest filing. The company management was asked to elaborate on the details, including the prospect for this year during the conference call last Wednesday, but CEO Xu merely said, "Look at the disclosure."

PetroChina also booked a pre-tax impairment of 13.4billion yuan, including 11.6 billion in upstream exploration and production assets. "The company has been making impairments in recent years despite oil price [being] way above the last bottom in 2016. Investors may question the quality of its upstream assets," wrote Lawrence Lau and Zoey Zong, energy sector analysts at BOCI Research, a subsidiary of Bank of China, on Friday.