Half of the city's trash to be converted to electricity, serving 140,000 households The new plant will be able to process the equivalent of half the waste produced annually in Dubai.   © Reuters
KENTA ANDO, Nikkei staff writerDecember 22, 2020 05:10 JST | Japan
CopyCopied

TOKYO -- Japanese trading house Itochu and engineering company Hitachi Zosen have secured an order to build and operate one of the world's largest waste-to-energy plants in Dubai, tapping new demand in the heart of one of the world's top oil-producing regions.

The facility, expected to cost about 120 billion yen ($1.16 billion), will generate electricity by burning trash from households in the United Arab Emirates city. It will be able to process about 6,000 tons per day, with an annual capacity of 1.9 million tons, equivalent to roughly half the city's waste.

The 200-megawatt plant will produce enough power for 140,000 households, with an efficiency of about 30%, among the highest in the world for this type of facility. Itochu and Hitachi Zosen will have a 35-year contract to operate the plant, which is slated to come online in 2024.

The project brings together the know-how of two companies with substantial experience in the field for their first joint foray in the Middle East. The region has long relied mainly on cheap natural gas and oil for power, but has more recently begun adopting solar and other renewable energy sources for sustainable development.

Waste-to-energy plants are seen as a more stable energy source than wind and solar, which depend on weather conditions. The UAE, where most household trash ends up in landfills, is a particularly promising market for the technology.

A new venture will be established there for the project, with Itochu owning 20% and Hitachi Zosen Inova, a Swiss subsidiary of Hitachi Zosen, holding 10%. State-linked Dubai Holding will control 31%, with the remainder split among three companies. 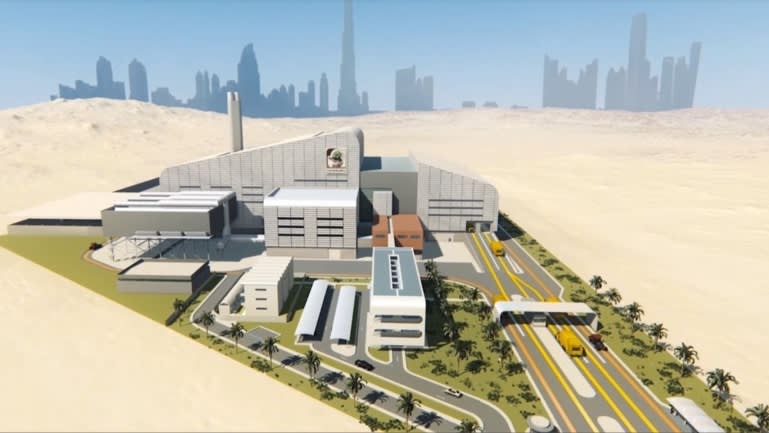 The facility will be among the world's largest waste-to-energy plants. (Photo courtesy of the Dubai government)

Itochu operates four waste-to-energy plants in the U.K. alongside French partner Suez, and the two companies are working on a 30 MW facility in Serbia. Hitachi Zosen has delivered about 500 such facilities worldwide, mainly in Japan and Europe.

Hitachi Zosen in particular has a major global presence in the waste-to-energy market. It is among the top players in Japan, alongside JFE Holdings and Takuma, with a roughly 20% share. In Europe, the Middle East and Africa, Hitachi Zosen ranks second only to France-based CNIM, boasting 29% of the market, according to a survey by a Swiss consulting firm.

The field is particularly important for Itochu, one of the few trading houses to make a full-fledged foray into generating energy from waste. The company has accumulated valuable expertise through its early partnership with Suez and now seeks to tap demand outside of Europe, where competition is intense, and Japan, where demand is likely to stagnate as the population shrinks.

Itochu and Hitachi Zosen have their sights set on Australia, which generates much of its power from carbon-intensive coal. Hitachi Zosen announced a plan this past January for a waste-to-energy plant in Western Australia, the first that the company will both build and operate overseas.

Japan's steel and shipbuilding industries, squeezed by competition from China and South Korea along with the coronavirus pandemic, are looking to waste-to-energy technology in a world increasingly focused on sustainability. Though Chinese rivals are on the rise in this field as well, Japanese players aim to use their technological edge to gain an early lead in fast-growing markets.

Nippon Steel Engineering is working on a facility in Taiwan with a capacity of 660 tons of waste per day, while JFE Engineering has received an order for a plant in Germany that can process 1,080 tons per day.

These two companies and Hitachi Zosen had a combined total of 84 outstanding orders for waste-to-energy plants at the end of fiscal 2019, more than double the figure five years earlier. They control just over half of the market spanning Europe, the Middle East and Africa.