Every breath you take: Water and power tell if Tokyoites are home If a home is using a lot of water but not much electricity, the utilities will inform the customer of a possible water leak.   © Reuters
SUGURU KURIMOTO, Nikkei staff writerMay 14, 2020 04:57 JST | Japan
CopyCopied

TOKYO -- Tokyo's power and water utilities will share real-time grid data as part of efforts to improve services and better inform their response during natural disasters.

Making this possible is the adoption of smart meters, which eliminates the need to dispatch human readers to each home. Tens of millions of these devices are currently installed around Tokyo.

At the same time, critics have raised the prospect of this collaboration undermining personal privacy and opening the doors to a new form of the kind of data oligopoly enjoyed by tech giants.

Tokyo Electric Power Co. Holdings, or Tepco, began its partnership with Tokyo's Bureau of Waterworks in March to share power, water and gas data, with the goal of developing services to improve the quality of life.

Bringing this idea forward was Grid Data Bank Lab, a joint venture between Tepco and IT services provider NTT Data established in 2018, which is attempting to forge a similar partnership with a gas company.

"If we use power and other lifeline data, we'll be able to visualize living situations in detail," said a Grid Data Bank manager appointed by Tepco. 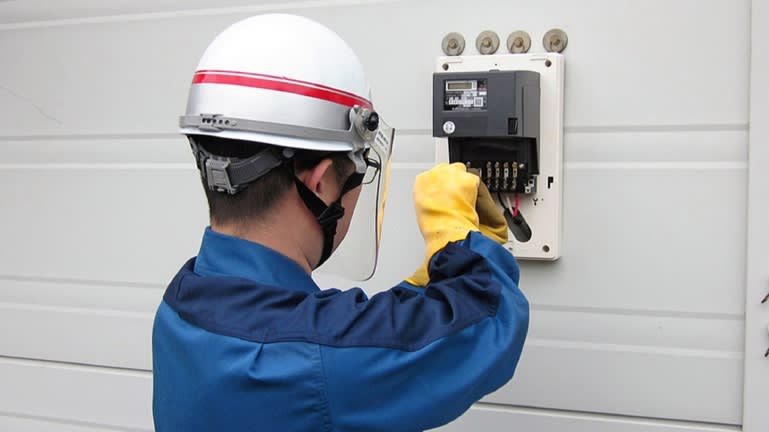 A Tepco worker installs a smart meter at a residence. (photo courtesy of Tepco)

For example, if a home is using a large amount of water despite low levels of power consumption, the utilities will inform the customer of a possible water leak.

Such a setup has proved useful during disasters. During a pilot test launched by Grid Data Bank in Tokyo's Adachi ward, authorities were able to identify which households had yet to relocate for safety based on electricity usage.

"The evacuation situation can be understood at one glance," said the Grid Data Bank manager.

Roughly 25 million smart meters had been installed in Tepco's service area as of the end of March. Japan plans to have 80 million of the devices, which collect power consumption data every 30 minutes, installed across the country by 2024.

Meanwhile, the city of Tokyo plans to construct its own smart meter system for its water supply in fiscal 2021, then start installing the devices in fiscal 2022. The data from the meters will be shared and analyzed with the power consumption data provided by Tepco through Grid Data Bank.

One Tepco executive sees the trove of data as a "gold mine." Roughly 120 companies have signed on to Grid Data Bank, including wireless carrier KDDI and property developer Mitsubishi Estate.

Tepco and a large retailer have begun a proving test to determine optimal business hours of outlets based on the times residents come home. As seen with the novel coronavirus epidemic forcing stores to shorten hours or restrict entry, there is potential demand for the data.

Sharing personal information involving power usage with outside parties had generally been forbidden by law, for the main reason of promoting fair competition among electricity sellers. Smaller suppliers deliver power over grids maintained by major utilities, and the rules prevented large utilities from leaking data about rivals to their own sales teams.

The Ministry of Economy, Trade and Industry plans to carve out an exception if the data is used to develop services. Utilities will even be allowed to provide nonanonymized private data as long as the person consents. A draft bill is moving through the legislature.

Tepco is looking at charging a fee for providing data to corporations, a departure from the practice of recouping all costs from service charges.

"We didn't even understand marketing," said a Tepco executive.

The new move toward data collaboration, however, comes as Google and Facebook face scrutiny for the outsize power they wield through their data collection. Large utilities may be painted as anticompetitive if they overly leverage the data to their advantage.

"I want the state to carefully monitor whether the data is being used appropriately," said an executive at a recently formed power supplier.