The council, called the Korea H2 Business Summit, will discuss challenges facing the industry and offer policy recommendations to the South Korean government. Members will invest 43.4 trillion won ($37.3 billion) by 2030 to build supply chains and other infrastructure for hydrogen in a range of uses, from fuel cell vehicles to power plants.

The council aims to pave the way for stepped-up South Korean exports of hydrogen-related infrastructure as countries around the world chase environmentally friendly energy sources to combat climate change. But with Japanese and European players also making strides, it will need to promote rapid technological development to keep South Korea competitive.

Leaders from member companies attended an inaugural meeting at the H2 Mobility+Energy Show, which opened near Seoul on Wednesday. It is rare for so many South Korean conglomerates, or chaebol, and other major corporations to come together in a common field.

"We will create a fund to promote large-scale investment, and to advance big infrastructure projects and overseas operations that require significant amounts of funding," SK Chairman and CEO Chey Tae-won said.

By enlisting businesses from a range of backgrounds, from the auto industry to chemicals to heavy industry, the H2 Business Summit will be able to launch multiple projects involving different conglomerates and accelerate commercialization efforts.

Companies can efficiently set up hydrogen-related infrastructure by working together to design power plants and produce storage tanks. Operators of hydrogen fueling stations could share hydrogen delivery trucks, for example. There are also plans for members to form consortia for infrastructure exports.

Many participating in the H2 Business Summit are already working to turn hydrogen into a moneymaker.

Hyundai, along with Toyota Motor, is a leading producer of fuel cell vehicles and also develops battery systems for robots and power stations. It aims to slash costs for its fuel cells by ramping up shipments, and announced in August that it would build two plants in South Korea for around 1.3 trillion won. 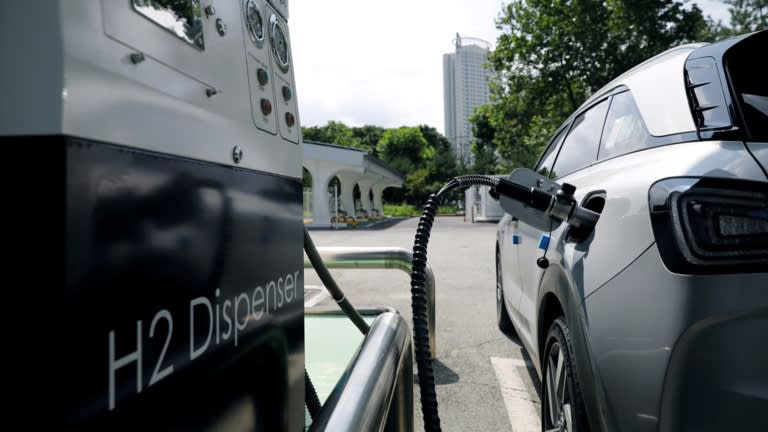 A car refuels at a hydrogen station in Seoul. Leading South Korean corporations are consolidating their know-how on the energy source with an eye on the global market.   © Reuters

SK is building its own hydrogen supply chain from production to refueling stations. The group now relies heavily on petroleum-related operations, like refining, and is working toward decarbonizing its portfolio.

In January, SK announced a $1.5 billion strategic investment in U.S. hydrogen startup Plug Power to build up know-how in the sector.

Though many of these companies are competitors in certain fields, they have decided to join forces through the H2 Business Summit to ensure the South Korean hydrogen industry can compete globally as quickly as possible.

The global market for hydrogen and related equipment is estimated to reach $2.5 trillion by 2050, with countries including in the Middle East building up their infrastructure. Building know-how at home would allow South Korean players to better tap overseas demand.

Many South Korean companies also face growing Chinese competition in their specialties, like shipbuilding, steelmaking and petrochemicals. Faltering revenues in such areas are pushing businesses to seek new opportunities.

Still, similar business alliances on hydrogen are forming in other countries as well.

In Japan, companies including Toyota and industrial gas provider Iwatani set up the Japan Hydrogen Association in December 2020 to drum up demand for the gas and reduce costs.

The European Clean Hydrogen Alliance launched in July 2020 has a similar purpose, bringing together businesses and local governments to promote the use of hydrogen produced without generating carbon dioxide.

The Hydrogen Council -- an international organization set up in 2017 and led by energy companies and automakers including Toyota, Daimler and Hyundai -- has enabled members to share research and work toward setting international standards.

With South Korea relatively late to the game, cooperation with other countries will be essential for the new initiative to get speedy results. The fact that the most prevalent type there is "gray" hydrogen, extracted from natural gas without the carbon capture technology used in "blue" hydrogen, may be a potential stumbling block.

If South Korea looks to become a global player in the field, it will need to leverage the speed of its chaebol as well as take on challenges including ensuring safety, implementing technology to take advantage of renewable energy, and joining international collaboration on standards.