MOSCOW -- Russia and India are enhancing partnerships in the energy sector, as the South Asian nation seeks new suppliers to meet its growing needs at a time when Moscow is keeping an eye on rising Chinese fuel exports.

Indian Oil Corp., the country's top refiner, announced on Nov. 12 that it was in the process of negotiating with Rosneft to increase oil purchases and expand investments in Russian oil refining projects, amid political tension in the Middle East that is affecting energy supplies.

With many Western investors reluctant to finance projects in the Russian energy sector, India has stepped in to fill the void. Over the past few years, Indian companies have invested more than $10 billion in major Russian oil projects such as Sakhalin-1, Vankorneft and Taas-Yuryakh.

"Russia wants to insure and diversify its energy customer base to not depend exclusively on Europe and China -- our two biggest buyers," he said. "We, of course, would like for India to become the third major customer for our hydrocarbons."

Lukin noted that from a geopolitical standpoint, India had certain advantages over Europe and China as an energy partner for Russia. New Delhi, unlike many European countries, has no political objections to Russian entities buying shares in their oil companies. While China has a warm relationship with Russia, it carries more long-term geopolitical risks than India does.

"What we have seen from the Kremlin over the years is that it regards good business and good politics as the ideal combination, rather than having only one," he said. "With India, we definitely see a good political relationship and Russia wants to cement that with a good economic relationship."

Weafer said that Moscow hopes to use energy ties with New Delhi to expand trade between the two countries and to attract Indian investors to Russia.

The Modi government also has a strong interest in deepening energy links with Russia. India imports 80% of its oil, with most of it coming from the Middle East. As geopolitical tensions in the region continue to rise, New Delhi is looking for new suppliers to meet its rapidly growing energy demand and Russia is a main candidate.

"Russia has the potential to be a natural and stable partner for fulfilling the needs of an aspirational people, while also benefiting from the partnership," wrote Dhamendra Pradhan in a September column for The Times of India.

Following U.S. sanctions on customers of Iranian oil in April and the drone attack on Saudi oil facilities in September, India responded by declaring that it would import more of its oil from Russia. 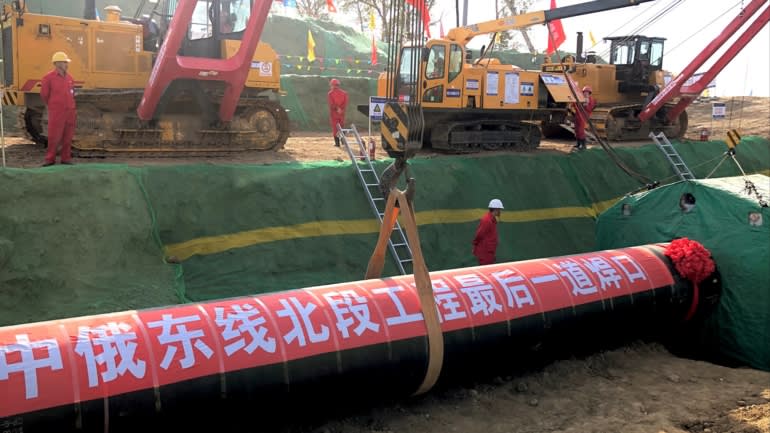 Although Russia is trying to strengthen energy ties with India, its pivot to Asia still centers around China. Russia overtook Saudi Arabia in 2016 to become China's biggest oil supplier. On Dec. 2, the long-awaited Power of Siberia pipeline will begin delivering 38 billion cubic meters of natural gas to China annually. The pipeline's launch will elevate China to becoming Russia's second-largest gas customer after Germany.

It is much easier for Moscow to expand energy cooperation with Beijing rather than with New Delhi because Russia and China share a long common border, said Weafer. India, on the other hand, is separated from Russia by thousands of miles of land and sea.

"Both [Russia and India] really want to do more energy deals, but they're having to confront geographic realities. If you take an LNG tanker out of the Yamal Peninsula, it is a long way down to Mumbai. Clearly, it would be much cheaper for India to buy gas from neighboring Qatar or even from Australia," Weafer said.

"Building a pipeline from Russia to India is not impossible, but it would be enormously expensive and difficult since it would likely have to pass through either the Himalaya mountains or Pakistan," he added.

Energy is not the only area where China is edging ahead of India as Russia's main partner in Asia. While New Delhi has long enjoyed a tight defense relationship with Moscow, Russia has in recent years given China a preference when it comes to supplying its most advanced weapons, such as the Su-35 fighter jet and the S-400 air defense system.

Could Russia's growing ties with China put a strain on its historical friendship with India? Lukin said that if the Kremlin plays its cards correctly, it won't have to make any difficult choices between the two regional rivals.

"Look at Russia's foreign policy in the Middle East, where Russia, thanks to savvy diplomacy, maintains a good relationship with everyone at a time when all these players are almost on the brink of war with each other," he said. "Why can't we do the same with India and China, especially since they themselves don't appear eager for conflict?"