Marubeni, Sumitomo and Mitsui to build project equal to 20% of existing capacity YANGON/TOKYO -- Trading houses Marubeni, Sumitomo Corp. and Mitsui & Co. will build a liquefied natural gas-fired power plant in Myanmar, one of the biggest investments by Japanese companies in the Southeast Asian country, people familiar with the matter say.

The three companies estimate total investment in the project at $1.5 billion to $2 billion. The plant is expected to start operating by 2025 with a capacity equal to about 20% of Myanmar's existing power plants.

The project marks a win for Japan in a region where China has competed hard for infrastructure deals.

Demand for LNG power is expected to grow in Southeast Asia as a low-emission alternative to cheap coal. Marubeni, Sumitomo and Mitsui expect the project in Myanmar to help them expand their power businesses in the region.

In Myanmar, electricity demand has been growing at a rate of 10% to 20% a year with industrialization and the electrification of farming villages. Frequent power outages have posed an obstacle to the country's goal of attracting foreign investment in manufacturing.

The plant will be built in a suburb of Yangon, Myanmar's commercial capital and most populous city. The three companies will operate it through a joint venture they will establish with Eden Group, a local conglomerate whose businesses include real estate and agriculture.

The plant will have a generating capacity of 1,250 megawatts -- about as much as one nuclear reactor. Myanmar's existing power generation capacity is about 6,000 megawatts, according to the country's Ministry of Electricity and Energy. 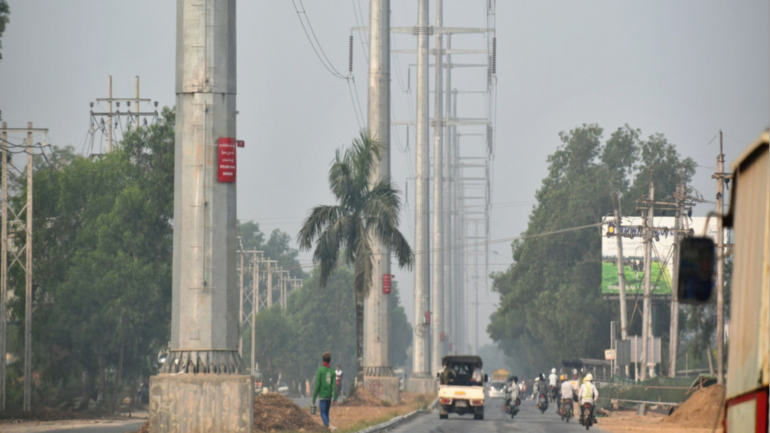 Power lines lead to the Thilawa economic zone near Yangon. Blackouts have posed an obstacle to foreign investment in Myanmar. (Photo by Yuichi Nitta)

The Myanmar government will soon provide the project partners a written notification that gives a green light to proceed to the next stage, which includes a detailed feasibility study, plant design and negotiations on selling power to the Electric Power Generation Enterprise, a public utility.

With its access to the Indian Ocean, Myanmar is a key focus of China's Belt and Road infrastructure initiative. Chinese President Xi Jinping called on Myanmar's government to smooth the way for infrastructure projects during a visit to the country in January. In 2018, Chinese companies secured the rights to an LNG power plant project of a similar scale to that planned by the Japanese trading houses.

The new investment in LNG power comes as Southeast Asian nations grapple with the environmental costs of coal, which provides about 40% of the region's electric power. The fuel's high carbon dioxide emissions have raised opposition to new coal plants among both local residents and the international community.

LNG emits about half as much CO2 as coal when burned. Myanmar recently began commercial operations at an LNG power plant run by a Hong Kong-led group. In Vietnam, the state-run PetroVietnam group has started building the country's first LNG terminal, which is expected to become operational in 2022. The Philippines also has plans for an LNG terminal.

Japan has faced criticism for its funding of overseas coal projects, prompting major trading houses to halt participation in new power plant and mine deals.