TOKYO -- The shipping arm of Malaysia's state oil company Petronas will replace half its tankers with lower-emission models by 2030 to help tackle climate change.

MISC plans to replace 50% of its fleet with liquefied natural gas dual-fueled vessels to transport crude oil and petroleum in the next 10 years, CEO Yee Yang Chien told the Nikkei Asian Review in an interview in Tokyo.

The company took delivery of the world's first two LNG dual-fuel tankers in early 2019, and will increase their numbers in an effort to address rising environmental concerns.

"Right now we are working on a hydrogen derivative" as an option for introducing zero-carbon engines in the future, said Yee, adding that MISC is "actively pursuing cooperation with other global partners to develop this."

Kuala Lumpur-based MISC has about 60 oil tankers as of December. LNG dual-fueled vessels are being considered as replacements particularly for transporting petroleum.

The greener vessels are built by South Korea's Samsung Heavy Industries and operated by AET, MISC's petroleum shipping arm. Both the shipping operator and its clients face pressure from international organizations and investors to tackle emissions, part of the environmental, social and governance movement in asset management.

AET serves European energy major Equinor, formerly known as Statoil, for oilfield operations in the North Sea. The Norwegian state-owned company dropped "oil" from its name to emphasize its shift toward a more sustainable business model.

Shipping is a major contributor to climate change. According to the United Nations' International Maritime Organization (IMO), the industry emitted 796 million tons of carbon dioxide in 2012, which accounts for about 2.2% of all global man-made CO2 emissions. That is roughly equivalent to Germany's entire greenhouse gas output. 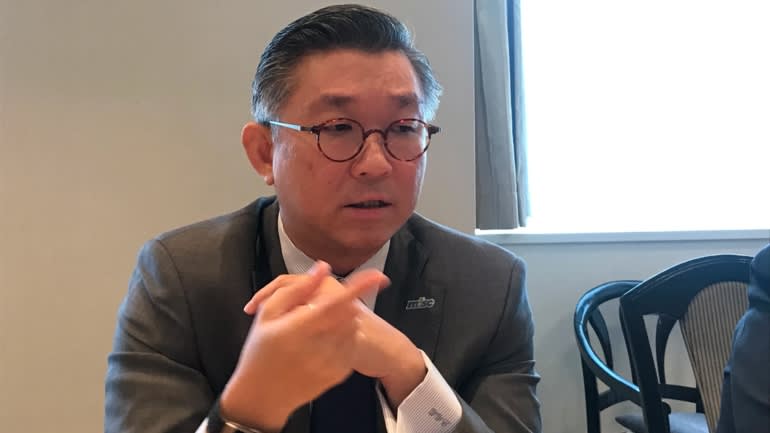 The IMO set a goal in 2018 to reduce greenhouse gas emissions by at least 50% by 2050 compared with a 2008 baseline, and has been pressuring companies in the sector to shrink their carbon footprints.

Yee told the Nikkei that the financial burden of the greener engines presents a big challenge for MISC, with each ship costing the company an extra $10 million to $15 million.

Yee said the key to overcoming the problem is to promote the ships with other partners, including ship builders and clients, to bring benefits of scale. "It will cost more, but so far there are certain customers who are prepared to pay the extra premium for ships (with reduced emissions)," he added.

MISC was set up in 1968 as a joint venture between the Malaysian government and a group of private entrepreneurs, shipping products including LNG to Japan, South Korea and Taiwan, as well as petroleum and floating storage. In 1997, the company became part of the Petronas Group, which currently holds a 57% equity stake in MISC.

"Anyone who believes we focus on doing in-house business for Petronas, no, that is an incorrect perception," Yee said. "We do business with a global set of clients. When you look at our financials, historically we have done primarily LNG tankers with Petronas, but we are expanding beyond that."

"The new business will be in the Atlantic area for us, for both oil and gas," Yee added. The Atlantic Basin includes South America, Africa and the Gulf of Mexico, where Petronas does not have existing operations.

The shipping company is currently focusing on the North Sea area around Norway for shuttle tankers, and shipping LNG from American and Canadian producers to Europe. MISC transported about 7% of the world's LNG in 2018. MISC is also trying to expand its offshore business in Brazil.

By expanding the business in those areas, MISC wants to "grow our secured and recurring profits by 20% in the next three-to-four years," the company said.

MISC's revenue is 8.78 billion ringgit ($2.1 billion), and operating profit in 2018 stood at 1.47 billion ringgit. Neither sales nor profit have seen significant growth in the past five years, making it a matter of urgency for the company to expand into new areas.

With regard to China's disputes with other nations over the South China Sea, where the company needs guaranteed security for its shipping to the North Asia region, Yee said he was not concerned.

"Bodies around the world have worked together [on addressing the territorial disputes]. We don't see an issue at all. For us it's obviously about security wherever we go," he said.