Powerwall puts solar power on a par with conventional electricity

The Powerwall is much cheaper than competing Japanese products in terms of storage capacity per kilowatt-hour. Taking into account the cost of installing solar panels and other costs, the batteries can make solar power competitive with electricity from the grid.

"The only question is whether [Tesla] will actually sell the product," said an official at Japan's Ministry of Economy, Trade and Industry.

Tesla has installed more than 50,000 Powerwall units, mainly in the U.S. and Europe. In Japan, it plans to offer a 13.5 kWh Powerwall for 990,000 yen ($9,010), enough to power a typical home for more than a day during an outage, according to the company's website. That translates to about 73,000 yen per kilowatt-hour. Storage batteries with smaller capacities made in Japan typically sell for around 200,000 to 300,000 yen.

After the Fukushima nuclear disaster in 2011, Japan introduced a feed-in-tariff system, which lets people sell unused renewable power back to the grid at fixed prices. The idea was to encourage the installation of solar panels. But the system has ignored market forces, leaving consumers to pay for the system through higher electricity bills.

Supply and demand for electricity fluctuate with changes in the weather and the time of day. For renewable power to catch on, storage batteries that can provide juice at night or on cloudy days are a must. But their high price puts off many potential buyers. 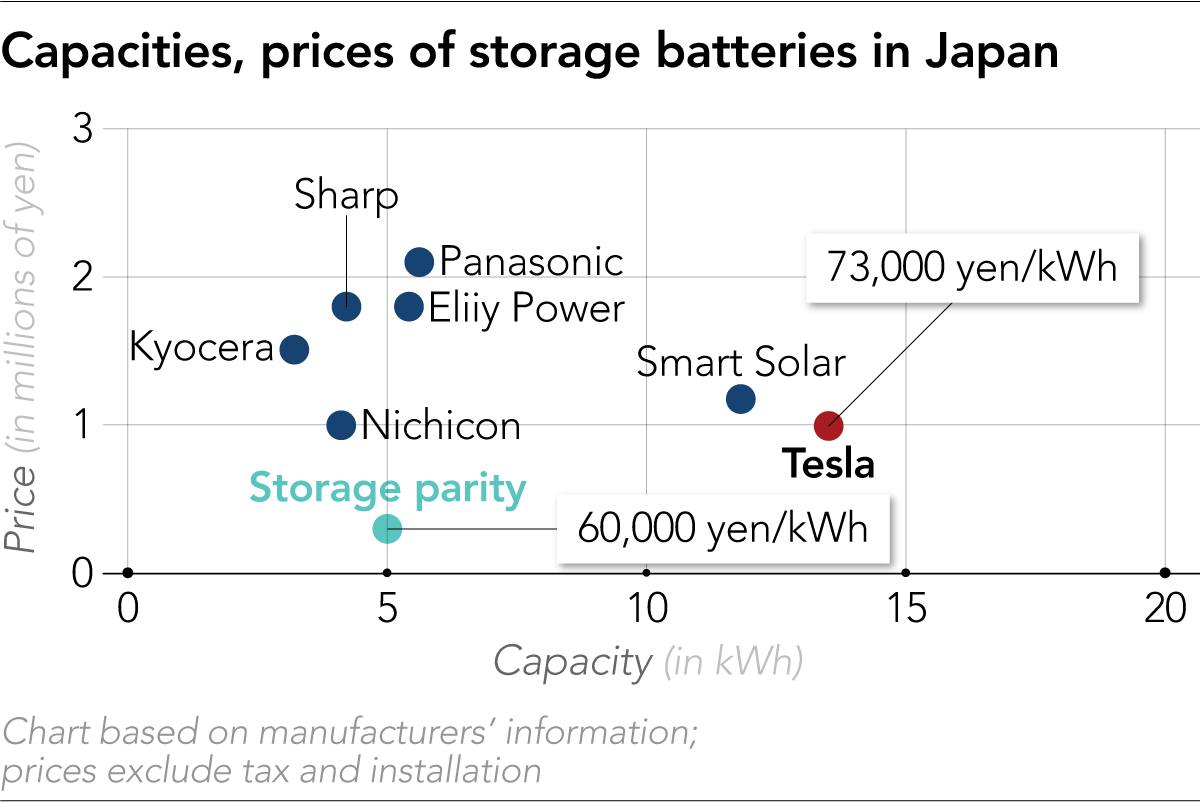 Enter the Powerwall, which is priced close to "storage parity," where the cost of buying electricity from a utility is equal to the cost of generating it at home. If the cost of electricity storage falls to 60,000 yen per kilowatt-hour, it will be cheaper for single-family homeowners with new solar panel systems to power their homes at the source, according to the latest estimate by Mitsubishi Research Institute.

MRI's estimate assumes the use of 5-kWh batteries widely marketed by Japanese manufacturers. The Powerwall offers more than twice as much capacity, although many experts say homes in Japan need even bigger batteries to provide backup power in an emergency.

Japanese storage battery makers stress their products' functionality and safety. Kyocera's batteries supply electricity primarily to specific home appliances in the event of a power outage, while Panasonic's use an artificial intelligence-based control system that "reads" weather forecasts to store power ahead of heavy rain or wind. Eliiy Power has been working to make its lithium-ion batteries safer. "There should be [set] criteria for comparing [batteries] in addition to price," said Hiroichi Yoshida, the company's chairman and CEO.

Households in Japan paid about 220,000 yen on average to install storage battery systems in fiscal 2015, according to an MRI survey of Japanese battery makers. The power cells themselves cost around 80,000 yen, with the price rising to around 150,000 yen if the cost of ancillary components, installation and inspection is included. Sales costs, including wholesale markups, come to 70,000 yen, one-third of the total price.

As the price of renewable power falls, "the business model of electric power companies will fundamentally change," said Hiroshi Takahashi, a professor at Tsuru University specializing in science and environmental politics. Retail sales of electricity will fall, as will utilities' revenue from power distribution, Takahashi said.

Energy storage parity was achieved in Germany in 2018, according to Germany Trade and Invest, the country's foreign trade and investment agency. "Virtual" power plants, which aggregate solar power and other distributed energy resources, are rapidly expanding in Germany.

Utilities with an eye on the future may begin investing more in virtual power and other new businesses, rather than thermal, nuclear and other big power plants, according to Takahashi. A move away from centralized production and distribution of power by big utilities toward a model of distributed supply and greater use of renewable power may arrive sooner than expected in Japan.